Liverpool fought their way back to the top of the Premier League last night with a battling 3-1 win over Southampton, who made life difficult for the visitors after taking the lead thanks to Shane Long. Naby Keita equalised before Mo Salah made his own piece of Liverpool history by bagging his 50th Premier League goal for the Reds.

That goal not only secured Liverpool a vital three points in their title challenge but also ended a run of six Premier League games without a goal for Salah. It also meant hit the half-century of goals quicker than any other player has for Liverpool, beating Fernando Torres’ record by just three games. The Spaniard took 72 games to hit 50 with Salah taking just 69 games to hit the same total.

In comparison to some Liverpool legends, Luis Suarez took 86 games, Robbie Fowler took 88 and Michael Owen took 98 so you can see what an incredible accomplishment this is by the Egyptian. Last season Salah hit a record 32 goals in a single Premier League season beating Cristiano Ronaldo’s total which put him well on his way to his 50.

Despite his goalscoring heroics, Salah slots into third on the all-time Premier League list. The quickest player to hit 50 goals in the Premier League era is of course, Alan Shearer, who managed it in just 66 games for Blackburn. For some time it looked like Salah would break his record but his recent blanks in front of goal means that the man who has scored more goals than anyone one else in England’s top flight holds onto this record as well.

Manchester United’s Ruud van Nistelrooy slots into second place in the all-time list, taking 68 games to hit the 50 goal mark at Old Trafford. Salah does go ahead of some big names, however, such as Sergio Aguero (81) and Thierry Henry (83).

The next target for Salah is 100 Premier League goals and if he replicates his form that he showed to get to 50, he will go level with current record holder Alan Shearer, who took 124 games to reach the century. Harry Kane is second on that list having taken 141 games and Liverpool fans will be hoping Salah sticks around for long enough to reach 100 goals.

Of course, individual records like this are nice but Salah has stated over and over again his desire to lift the Premier League trophy. Liverpool are now two points clear of Man City having played one game more than them and they will stay there for this weekend at least, with City in FA Cup action. Could this finally be their year? It looks like it is going right to the wire. 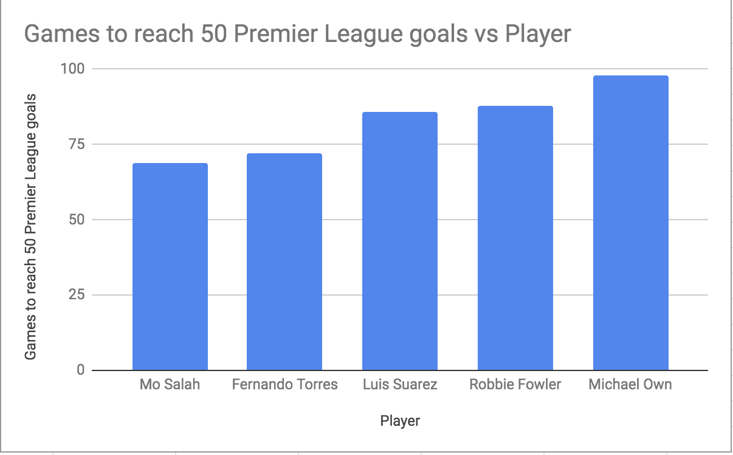