Liverpool rode their luck as they registered a vital 2-1 win over Tottenham, with a combination of errors between Hugo Lloris and Toby Alderweireld giving them the last minute winner that sent them back to the top of the league.

This left many fans and pundits questioning Liverpool’s performance which was below-par compared to what we have seen from Jurgen Klopp’s men this season. On the other hand, this Liverpool team do seem to be finding a way to win games even when they don’t deserve to, leaving many people to think it really is their year.

Saying that they are one of the best Premier League teams ever may seem outlandish given their recent weak performances but let’s look at the statistics. Using their current rate of picking up points, Liverpool are set to finish on 93.8 points, yet it will not be enough to win the Premier League title. Manchester City, with their game in hand and superior goal difference, look likely to finish on 94.4 points if they replicate the form they have shown over the first 31 games.

That means Liverpool will record the fourth highest points total in Premier League history and become the only team to get over 90 points and not win the title at the end of the season. How is your luck. Pep Guardiola’s City are just an unstoppable juggernaut at the moment, still on course to win the quadruple.

Last season they also broke the record for the most points in a Premier League season, hitting the 100 point mark for the first time ever. That City side were the best we have seen in the Premier League and this season, if they reach the expected tally of 94, that will register as the third highest points tally, certifying Pep Guardiola's dominance as the best manager in the world.

Back to back Premier League titles, something we haven't seen in a decade, combined with their other trophies shows just how elite this City side is. It is nothing short of a disgrace to call this Liverpool side ‘bottlers’ a term that is thrown around far too often on social media these days.

For comparison purposes, the Arsenal 'Invincibles' of 2003/04 won the league with 90 points and are often regarded as one of the best Premier League sides ever, but the Reds are set to surpass their points total. They will also surpass every single Manchester United points total in the Premier League era, with Sir Alex Ferguson logging his highest points total 91, in the 1999/2000 campaign. I’m sure United will point to their 13 Premier League titles however the fact of the matter is, none of those Fergie sides would have picked up the trophy if this Liverpool side had been competing at the time.

Anyone calling the Reds bottlers is plain stupid given the fact they could still win the Champions League and Premier League double. Even if they don’t win anything, they can be incredibly proud of this spectacular campaign. 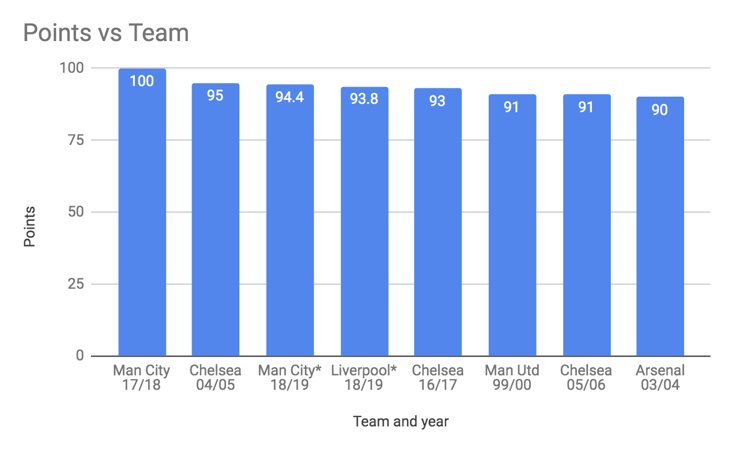