Joe Joyce’s Manchester clash with Joseph Parker is a fight on the lips of every British boxing fan this weekend. This clash of top heavyweight contenders has everything one could ask for in an arena-headliner and is likely to spark talking points for weeks to come. But this heavy duty match-up is far from the only gloved action taking place this weekend. In fact, we are in for a particularly enticing set of bouts this weekend.

World titles, international clashes, pound-for-pound practitioners and solid-gold prospects. This weekend boasts all that and more. From out of the shadows cast by the main event giants, here are the five best non-heavyweight fights taking place this weekend.

Originally scheduled as the co-main event for the cancelled Mauricio Lara vs Leigh Wood bout, this lightweight scrap is a worthy headliner. Hughes has been on a roll over the last two years, capturing the British lightweight title and the IBO crown. While that title is not seen as a genuine world belt, it has done wonders for ‘Maximus’. He was written off when Liam Walsh handed him his 5th career loss in 2019 but he is unbeaten since and looks better every time he fights.

Galahad is taking a risk here. The 32-year-old has not fought in ten months, since a shock knockout loss to Kiko Martinez while defending his IBF featherweight title. Galahad now moves up two weightclasses to meet Hughes, who is in the form of his life. The Qatari-born stylist deserves massive credit for taking a risk in his comeback fight. It should make for an incredibly absorbing bout.

On the same night Galahad’s title was ripped from his grasp, Harper was KO’ed in her own world title defence. Alycia Baumgardner left the ring that night with the WBC championship, which ‘Belter’ has had to watch her use to secure an O2 date with Mikaela Mayer. Now Harper gets a chance to reign as a world champion once again.

She won’t have it easy, though. Rankin has been bang in form since being stopped by Savannah Marshall in 2020. A victory over veteran star Maria Lindberg saw her realise her dream of lifting a world title. The Scot successfully defended the belt last time out against Alejandra Ayala with a ten-round stoppage win. But doing the same against ‘Belter’ is a very different proposition. 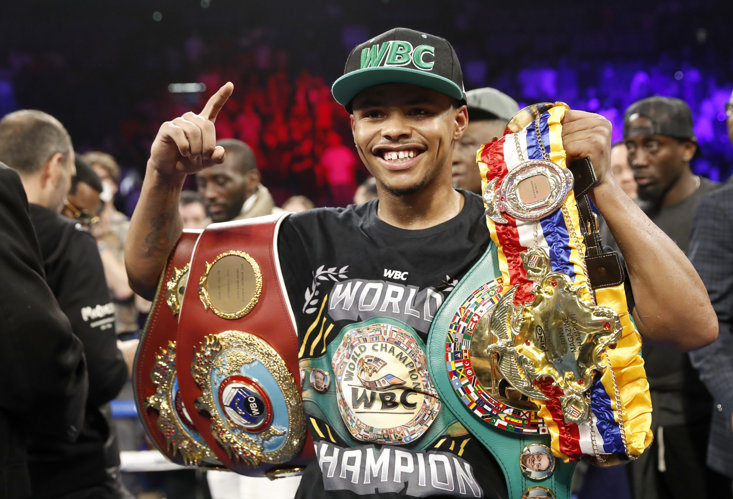 Can anyone stop Shakur? Already a two-weight world champion at the age of 25, the Olympic silver medalist makes boxing look easy. Having beaten Oscar Valdez in a title unification bout in April, a win over Conceicao would put him in Fighter of the Year discussions. Stevenson lost his titles on the scales at Thursday's weigh-in, coming in over the 130lb limit. But the championships will still be on the line for Conceicao.

Beating the Brazilian is easier said than done. Ask Valdez, who needed a controversial decision to defeat him last year. Conceicao has won his only outing since, when he inflicted the first loss of contender Xavier Martinez’s career. A lot of people talk about Conceicao as something of an uncrowned champion. Beating Shakur is his chance to change that for the better.

Serrano returns to the ring for the first time since her Fight of the Year battle with Katie Taylor back in April. ‘The Real Deal’ had been due to compete on the cancelled Jake Paul-Hasim Rahman Jr card. She now finds herself looking to unify her titles with IBF champion Mahfoud.

This is no soft-touch for Serrano. Mahfoud is unbeaten and looks to be peaking. This is Mahfoud’s first fight outside her native Denmark, while Serrano is debuting in the UK too. Another big women’s match-up in a year that has boasted a seemingly endless supply of them. Serrano has the edge here but don’t expect a walkover. 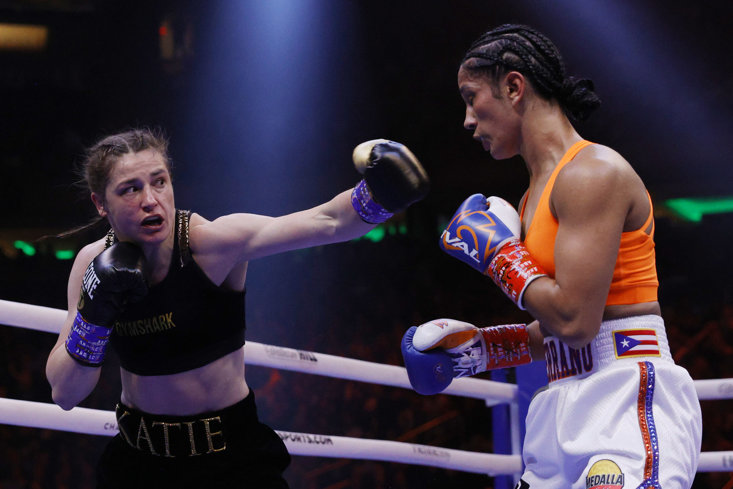 A moderate step up in class for the Olympic silver medalist, but one that Davis should negotiate. This fight isn’t on the list for its competitive parity. You should watch this bout because it is a chance to get in on the ground level with the 5-0 ‘Businessman’.

Davis looks set to be one of American boxing’s defining talents going forward. An immensely decorated amateur and close friend of Shakur Stevenson, the pair have spoken of their desire to hold world titles simultaneously in the future. With Davis operating just one weight class about Stevenson, one wonders if some friendly fire might be in their collective future.

x
Suggested Searches:
The Sportsman
Manchester United
Liverpool
Manchester City
Premier League
More
boxing
Welcome To Box-Tober: Boxing Puts Its Best Foot Forward This...
The nights are drawing in, the sun-drenched summer is behind us and the slow, inexorable march to morbid [ ... ]
boxing
Who Should Tyson Fury Fight Next?: The Sportsman Readers Have...
The Tyson Fury and Anthony Joshua saga has gone back and forth in the last few days. The Gypsy King [ ... ]
boxing
Invasion Of The Body Snatcher: Dillian Whyte On The Comeback...
Heavyweight contender Dillian Whyte has hooked up with legendary trainer Buddy McGirt in a bid to rebuild [ ... ]
boxing
Fury Vs Joshua: When Negotiations Robbed Us Of Dream Boxing...
Tyson Fury and Anthony Joshua have decided to see other people. Like any break-up, there are two sides [ ... ]
boxing
From Battlefields To The Boxing Ring: Meet 164-Fight Journeyman...
The alarm goes off at 5.30am on a typical Friday morning for one of British boxing’s most popular [ ... ]
boxing
45 Years Ago Today: Muhammad Ali Leaves It All In The Ring Against...
Muhammad Ali faced one of the toughest nights of his career on this day 45 years ago. ‘The Greatest’ [ ... ]
boxing
Nowhere Man: Where Does Anthony Joshua Go Next Without Tyson...
WBC champion Tyson Fury insists his proposed December bout with Anthony Joshua is now off. Despite negotiations [ ... ]
boxing
Anthony Joshua Out, Mahmoud Charr In: Has Tyson Fury Gone Too...
WBC champion Tyson Fury has revealed Anthony Joshua has missed the deadline for a potential fight with [ ... ]
boxing
Tyson Fury Confirms Anthony Joshua Fight Is OFF After Contract...
Tyson Fury has confirmed on his Instagram story that the planned meeting with fellow British heavyweight [ ... ]
boxing
Joe Joyce Is Ready For The World. Is The World Ready For Joe...
‘Juggernaut’ by name, ‘Juggernaut’ by nature. Joe Joyce ran down everyone in [ ... ]
boxing
Onto The Next One: Shakur Stevenson Says Goodbye To Super Featherweight
Shakur Stevenson said his farewells to super featherweight on Friday with a dominant unanimous decision [ ... ]
boxing
The KO Show: Joe Joyce Knocks Out Tough Joseph Parker In A Thriller
As the dust settled on Joe Joyce’s spectacular 11th round knockout victory over Joseph Parker, [ ... ]
boxing
Living Legend Amanda Serrano Defeats Sarah Mahfoud In Manchester
Living legend Amanda Serrano won a unanimous decision over Sarah Mahfoud at the Manchester Arena. ‘The [ ... ]
boxing
Joe Joyce Vs Joseph Parker: A Heavyweight Headliner Like No...
Joe Joyce and Joseph Parker’s Manchester throwdown on Saturday night is an unusual heavyweight [ ... ]
boxing
Shane Fury Exclusive: Tyson Would Beat Usyk And 'Made To Measure'...
Shane Fury, brother of WBC champion Tyson, has opened up on watching ‘The Gypsy King’ battle [ ... ]
boxing
Joe Joyce Vs Joseph Parker: Tale Of The Tape
Joe Joyce and Joseph Parker finally do battle this weekend at the Manchester Arena. Joyce has been in [ ... ]
boxing
Rocky And Larry: Marciano's 0 Will Never Go, But Holmes Came...
On this day in 1955, Rocky Marciano won the final fight of an unblemished professional boxing career. [ ... ]
boxing
Floyd Mayweather Confirms Exhibition Bout With KSI's Brother...
Floyd Mayweather has confirmed he is to fight YouTube star Deji Olatunji in a big-money exhibition in [ ... ]
boxing
Katie Taylor Puts Undisputed Title On The Line Against Karen...
Matchroom Boxing have announced an exciting card for October which will be headlined by undisputed lightweight [ ... ]
boxing
Floyd Mayweather Confirms That Conor McGregor Rematch Is Happening
Floyd Mayweather has confirmed that a rematch with Conor McGregor is in the works for 2023 and that [ ... ]
boxing
Everything You Need To Know Ahead Of Maxi Hughes Vs Kid Galahad
Former featherweight world champion Kid Galahad jumps up two weight classes this weekend when he takes [ ... ]
boxing
Claressa Shields Vs Savannah Marshall Card Officially Rescheduled...
Claressa Shields and Savannah Marshall’s highly-anticipated undisputed showdown has officially [ ... ]
boxing
See You At The Crossroads: What Next For 'Canelo' Alvarez And...
The dust has settled on the trilogy pitting Saul ‘Canelo’ Alvarez against Gennady ‘GGG’ [ ... ]
boxing
Everything You Need To Know Ahead Of Shakur Stevenson Vs Robson...
The undefeated Shakur Stevenson returns to New Jersey this weekend to defend his WBC and WBO super-featherweight [ ... ]
boxing
The Long Road Back: Will 'Canelo' Alvarez Ever Be The Same After...
Most people have decided how Saul ‘Canelo’ Alvarez’s undisputed super middleweight [ ... ]
boxing
Tony Bellew Reveals He Organised Usyk Fight While Drunk On His...
Tony Bellew has revealed that his November 2018 bout with current unified heavyweight champion [ ... ]
boxing
Floyd Mayweather Reportedly Set To Fight KSI's Brother Deji
Floyd Mayweather is set to fight YouTube star Deji Olatunji in a big-money exhibition in Dubai on November [ ... ]
boxing
Appreciate Gennady 'GGG' Golovkin While You Still Can, He Won't...
You’ll miss him when he’s gone. The highlight-reel knockouts. The granite chin. The fact [ ... ]
boxing
Vasiliy Lomachenko To Face Jamaine Ortiz Before Chasing The...
Vasiliy Lomachenko will face unbeaten prospect Jamaine Ortiz in New York on 29th October. The match [ ... ]
boxing
Chris Eubank Sr Weighs In On His Son Vs Conor Benn... And He's...
October’s new generation revival of the Benn-Eubank boxing feud has been thrown into disarray. [ ... ]