Goals from Raphinha and Rodrigo handed Leeds United a crucial 2-1 victory over Norwich City on Sunday, leaving the Canaries looking increasingly marooned at the foot of the Premier League.

It was a much needed result for Marcelo Bielsa’s side after a troubled start to the season had left them boasting only a single win from nine matches. But with Daniel Farke and Norwich having registered just two points so far, this was always going to be a contest Leeds were hopeful of winning.

The three points didn’t come easily for the Yorkshire side, as they were again undone by a set-piece goal immediately after they had taken a second-half lead, but Bielsa will be happy with how his team got over the line in the end.

In the continued absence of striker Patrick Bamford, the spotlight was on Leeds in an attacking sense, but they constantly asked questions of Norwich, particularly in the second half, and with their greater share of possession they were largely comfortable winners despite a valiant effort from the hosts.

The misery piles on for Norwich, though, and the pressure will intensify on Farke following this latest defeat. They now sit eight points adrift of safety, and supporters will once again be frustrated at how their side can seem to regularly shine in the Championship yet look toothless and devoid of ideas in the top flight.

The Sportsman
@TheSportsman
⚽️ Just 10 minutes after saying 'this game is awful' and Leeds are 2-1 up at Norwich...
@Radebe_Leeds | @AllLeedsTV 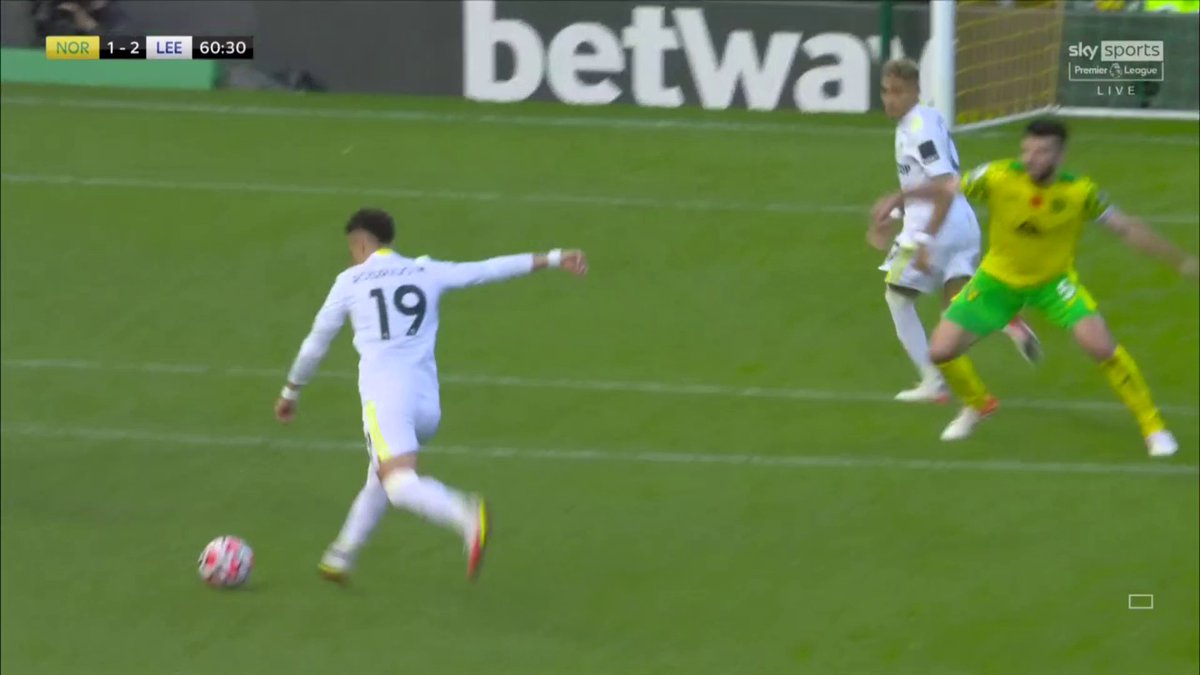 This match was billed as one of the season’s early crunch clashes between two sides floundering at the bottom of the table. And the lack of quality in the first half was all the evidence needed to showcase why they are both struggling this term. Leeds’ Dan James almost opened the scoring after rounding Tim Krul but his goalbound effort was cleared off the line by Grant Hanley, a golden opportunity spurned. There were a handful of half-chances for the two sides in the opening 45, but neither team looked threatening in the final third.

We were finally treated to some moments of quality in the second half. It took almost an hour, but the scoring was opened when Raphinha put Leeds ahead after working his way in from the right, getting the better of Andrew Omobamidele like he had done several times earlier, and drilling his shot through a crowd of yellow shirts to find the back of the net.

But it seemed as though going a goal down sparked the hosts into life as they replied instantly. Omobamidele rose highest to head home from a corner to swiftly wipe out the visitors’ lead. Yet in true footballing fashion, Leeds regained their lead straight after the leveller as Rodrigo curled his effort into the far corner after capitalising on an Ozan Kabak mistake, with Krul fumbling his attempt to prevent the goal.

The hosts pushed to find a response to Rodrigo’s strike but Leeds were able to hold out for three valuable points as they bid to kick-start their 2021-22 campaign.