Throughout her three-year career, Ebanie Bridges has had to answer allegations that she is a novelty fighter who skates by on her looks. Tonight, she can respond to such disrespectful claims by raising her IBF world bantamweight championship belt. ‘The Blonde Bomber’ silenced the doubters by defeating veteran champion Maria Cecilia Roman via unanimous decision to claim a world title at the second attempt.

The Australian’s performance was about skill in the first half and sheer will in the second. Bridges started fast, establishing the jab that has been honed under the tutelage of new trainer Mark Tibbs. Roman was content to tuck up and absorb the punishment, something that would become a running theme of the first half of the fight.

The 35-year-old mixed some bracing uppercuts into her attack in the second, as the champion struggled to get out of the blocks. The Argentinian finally opened up in the third, thudding a decent uppercut to Bridges’ body and firing off some solid left hooks. She did not sustain her attack in the fourth though as Bridges established distance. The fifth was closer, but the sixth saw ‘The Blonde Bomber’ throw her best shots of the night. The Aussie Leeds United fan doubled up brilliantly on her left hook, taking it to both body and head.

Down the stretch, the veteran instincts of Roman kicked in. The champion seemed to have kept energy in the bank for the later rounds, and she began to open up. Bridges had to eat a crunching right hook in the seventh, and the following round began with Roman ripping in a slick combination. The final two rounds were pure war, with the endless activity from both warriors making it hard to split them. Both boxers fought their hearts out, firing hooks at each other until the bell. The scorecards were wider than the bout warranted perhaps, but Bridges fully deserved her moment and her title. The crowd at the First Direct Arena could not have been happier to see their adopted daughter claim both. 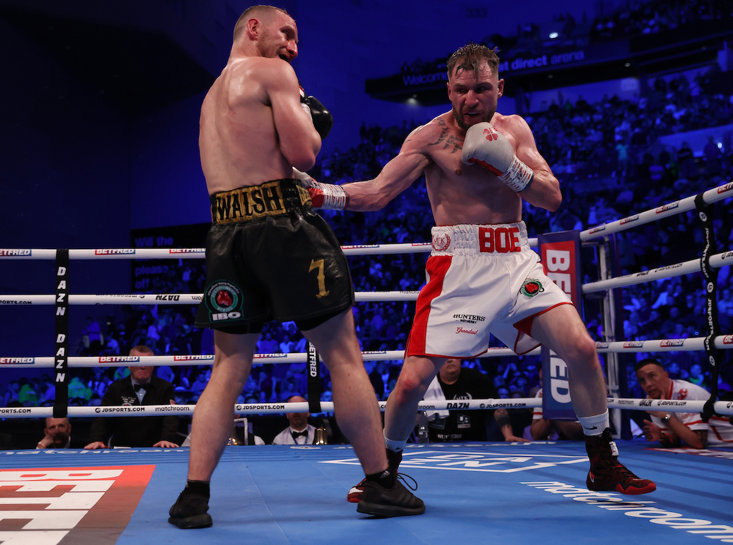 Maxi Hughes gained a measure of revenge tonight with a unanimous decision win over Ryan Walsh. Hughes’ last defeat came to Ryan’s twin brother Liam in 2019, and the Yorkshireman has been on a career-best run since. ‘Maximus’ successfully defended the IBO lightweight bauble he won last time out in an upset win over Jovanni Straffon.

Hughes found success in the early rounds with some well-picked counter-shots. A dipping left hurt Walsh early, and it was a shot Hughes would revisit throughout. A double jab/left cross combination in the third pushed Walsh back as the 35-year-old struggled to set himself. The straight left hand became Maxi’s greatest weapon, and he hooked well off it to control centre ring. Walsh tried switching to match Hughes’ southpaw stance, and banked a couple of late rounds doing so. The champion finished the strongest though, and took a wide points nod.

Super lightweight prospect Dalton Smith extended his unbeaten record to 10-0 against the game but outclassed ‘Sugar’ Ray Moylette. The Sheffield man flew close to the wind with his body shots at times, and had two points taken for a seventh round low blow. There were tense moments when an eighth round beltline shot stopped proceedings again, but the contest was rightfully allowed to continue.

Smith secured the stoppage in the tenth and final round, scoring two knockdowns before Moylette’s team threw in. The Irishman argued he should have been allowed to continue, but he was staggering in such a way that his corner were right to be concerned. A solid display from Smith, but he’ll need to keep his punches up next time out.

Australia’s Commonwealth gold medalist Skye Nicolson looked in complete control while outpointing Bec Connolly over six. The 26-year-old was fighting in her second pro outing, and still harbours ambitions of winning an Olympic medal at Paris 2024. She was in cruise control tonight, racking up points behind a solid southpaw jab and whipping in languid left-handed shots at will.