“There haven’t been too many like him in sport, and there certainly have been none like him in Irish sport,” writes Ewan MacKenna of his subject, the MMA combatant Conor McGregor.

Even so, if the sun ever decides to give up the day job, celebrities have all the dependability required for their rise and fall to stand in as a reliable timekeeper. No matter how high the arc, intense the glare, or unique the story, what goes up must eventually plummet past your office window. And McGregor, for all his vast wealth, is somewhere in the latter part of the cycle.

But if you’re here for the standard chronology or fanboy “pages of MMA analysis around each of his triumphs and disasters in the octagon”, the author has some advice for you: “Go away. Get out of here. Be gone.”

This project is much more ambitious than that. Loosely structured around the fortnight he spent in Las Vegas for the build-up to McGregor’s fight against Khabib Nurmagomedov in October 2018, MacKenna gets to grips with McGregor the megastar “as a representation of the ills of society, but also a creation of those ills. A microcosm of the anger and rage that has seen politics swerve so far to the right. A mirror of the need and the greed in a society where your earnings matter far more than your morals ever could.”

That means MacKenna, a former Irish Sportswriter of the Year, turning a novelist’s eye on the McGregor phenomenon to capture just how rancid the story has turned.

The fame may be global, “In Brazil, if you mention you are Irish, his is the name that comes up,” but the brand is dangerously unstable, from the star’s off-duty attacks on a rival’s bus and an old man at a bar, to his fans brawling in the streets (and one of them being so perplexed that his new tweed suit featured buttons where the zip should be that using the facilities ended in humiliation), to the organized crime his Venn diagram intersects with, and the investigations yet to come (or at least be reported on in Europe).

MacKenna knows the fighting industry and its employees and camp followers from Dublin to Vegas, but is aghast at just how polluted the air around McGregor has become. For while an opponent may eventually rise to smash a king’s face in, it’s nothing compared to what fame can add to the humiliation.

And while the author gives the impression he hasn’t enjoyed producing a single sentence of this book, it’s a superb piece of writing.

“There have always been those who think they can become so big that they can merely step over the chasm,” he writes. “Chaos” deserves to become a foundation text on what that chasm holds.

Chaos is a Friend of Mine, Ewan MacKenna. De Coubertin Books, £14.99 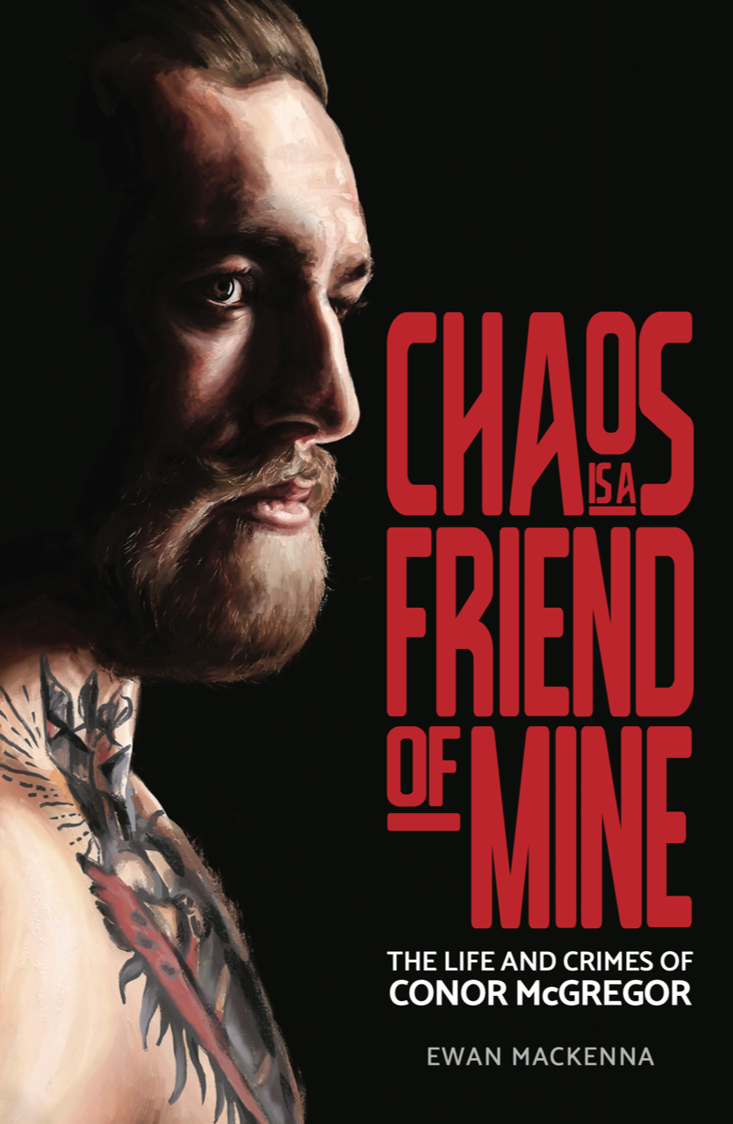 x
Suggested Searches:
Manchester United
Liverpool
Manchester City
Marcus Rashford
Premier League
More
ufc
Your Guide To UFC 263, As Israel Adesanya Takes On Marvin Vettori
UFC 263 rolls into Arizona this weekend, with the small matter of a rematch between Israel Adesanya [ ... ]
ufc
Charles Oliveira Could Fight Conor McGregor In Brazil After...
Brazilian superstar Charles Oliveira could take on Conor McGregor in his homeland after he pulled off [ ... ]
ufc
UFC 262 Preview: A New Heir To The Lightweight Throne Will Be...
It’s been more than three years since we have seen anyone other than Khabib Nurgmagomedov wear [ ... ]
ufc
UFC 261: Jorge Masvidal Suffers First Knock Out As Kamaru Usman...
If the build-up to UFC 261 was hyped up, the night itself exceeded all expectations. In a stunning main [ ... ]
ufc
Kamaru Usman Hints He Could Walk Away After UFC 261 Clash With...
UFC welterweight champion Kamaru Usman has suggested he could walk away from the Octagon after his main [ ... ]
ufc
UFC 261: All You Need To Know Ahead Of A Blockbuster Night In...
Fight fans are in for a real treat in the Octagon this weekend with UFC 261 serving up a blockbuster [ ... ]
ufc
Conor McGregor Cancels Dustin Poirier Trilogy Due To Dispute...
Conor McGregor has insisted his trilogy fight with Dustin Poirier is off after the pair were involved [ ... ]
ufc
New Lightweight Champion To Be Crowned At UFC 262 After Khabib...
It is looking increasingly likely that a new lightweight champion will be crowned at UFC 262 with Michael [ ... ]
ufc
UFC Set To Return In Front Of A Full Crowd With A Stacked Card...
After more than a year of coronavirus-induced capacity restrictions, the UFC is set to finally return [ ... ]
ufc
Four Champions And Three Undisputed Titles On The Line At UFC...
UFC 259 features four champions, as middleweight king Israel Adesanya moves up to 205lbs to battle the [ ... ]
ufc
Bold, Brash And Wealthy, Has Conor McGregor Simply Become Too...
Big and tough as he was, King Kong needed the Empire State Building; the big Silverback just wouldn’t [ ... ]
ufc
Everything We Know About Dana White And The UFC's Fight Island...
Ultimate Fighting Championship president Dana White has been vocal in his commitment to holding UFC [ ... ]
ufc
How Anime Fuelled Israel Adesanya's Ambition, Ability And Style...
Every so often, in every sport, a truly unique character arrives with seemingly the sole purpose of [ ... ]
ufc
Is Banking £1.5Million Per Second Enough To Keep Conor McGregor...
Find someone who looks at you the same way Dana White looks at Conor McGregor. Dana needs Conor. He [ ... ]
ufc
Donald 'Cowboy' Cerrone Is The Adrenaline Junkie Who Has Cheated...
Very, very few of us would dare take on Conor McGregor in a staring contest, let alone have the guts [ ... ]
ufc
''I Need MMA'' - Only The Octagon Can Bring Redemption For Conor...
Conor McGregor is back and, boy, is he glad. The Irishman returns to the cage this weekend to duke it [ ... ]
ufc
McGregor's Talk Of A Boxing Comeback Is Proof He's Running Out...
Conor McGregor is currently preparing for his comeback bout at UFC 246, which takes place at the T-Mobile [ ... ]
ufc
Conor Teams Up With His Boyhood Coach In Preparation For UFC...
Conor McGregor has turned back time as he looks to get the better of Donald Cerrone in UFC 246 on January [ ... ]
ufc
Masvidal Predicts Quick Win For Conor At UFC 246 To Set Up Blockbuster...
Jorge Masvidal, the number three ranked welterweight fighter in the UFC, has tipped Conor McGregor [ ... ]
ufc
Conor McGregor's Return Sells Out In 3 Minutes And Gate Reaches...
Tickets for Conor McGregor’s hotly-anticipated return to the UFC sold out within three minutes [ ... ]
ufc
Conor McGregor Calls Out ''Scurrying Rat'' Khabib Ahead Of His...
Conor McGregor is no stranger to a bit of trash-talking and he has ramped up his return to the UFC by [ ... ]
ufc
Conor McGregor Set To Duel It Out With 'Cowboy' Cerrone At UFC...
Conor McGregor will make his long-awaited return to the Octagon in the New Year by taking on Donald [ ... ]
ufc
Feeding The Canvas: Conor McGregor Responds To Dustin Poirier
Conor McGregor has hit back at former lightweight title challenger Dustin Poirier after the American [ ... ]
ufc
“Whatever Comes My Way, I Deserve It” Conor McGregor Breaks...
MMA superstar Conor McGregor has broken his silence on the video that emerged last week showing [ ... ]
ufc
UFC 239: Jon Jones: The Greatest?
As Jon Jones approaches his 32nd birthday and the tenth time in his career to defend his UFC Light Heavyweight [ ... ]
ufc
Former UFC Champion Conor McGregor In Hot Water Again After...
Conor McGregor, the former featherweight and lightweight Ultimate Fighting Champion, is in trouble with [ ... ]
ufc
The Craziest End To A UFC Fight Ever? Cody Garbrandt And Pedro...
Jon Jones stole most of the headlines at UFC 235 last night in Las Vegas but there is no doubt that [ ... ]
ufc
''Literally The Greatest Fighter Of All Time'' - Jon Jones Cruises...
Jon Jones retained his light-heavyweight championship at UFC 235 last night with a clear decision win [ ... ]
ufc
UFC 235 Preview And Fight Night Predictions: Jon Jones And Anthony...
The octagon returns home to the T-Mobile Arena in Las Vegas, with two titles up for grabs as Jon Jones [ ... ]
ufc
Bellator 217 Preview: James Gallagher Headlines Bellator’s Return...
Bellator continues its foray into European territory with a return to the 3Arena in Dublin, Ireland [ ... ]