He has been called the luckiest journalist in the world. When award-winning sportswriter Neil Harman decided in mid-2019 to shadow Wycombe Wanderers, unless he was a kosher medium or in possession of one of Thanos’ Infinity Stones, he couldn’t have predicted what a gold mine he had stumbled upon.

“The fear in starting something like this was that nothing would happen,” Harman stresses as this brilliant book for Football League lovers opens, “The team would be average, the season free of incident, the players failed to engage, the storylines were few and far between and the writer would have to overindulge in imagination. Trust me, I didn’t.”

Third-tier Wycombe Wanderers, the team “largely unheralded beyond junction four of the M40”, created the footballing fairytale of the year. Manager Gareth Ainsworth and talisman Adebayo Akinfenwa spearheaded a journey that began by simply avoiding relegation and - shudder - potential administration and ended up at Wembley and then the Championship. Even Bolton, starting with the 12-point deduction for falling into administration in May, had better odds of survival in League One than their ‘wandering’ brethren, Wycombe.

Wycombe Wanderers
@wwfcofficial
One month on!
38
368

Given access-all-areas to Wycombe’s threadbare but warm environment and providing personal insight, Harman documents the marvellous 19/20 campaign, as it happens, whilst exploring the relationships with and backgrounds of key individuals. Make no mistake, the experienced Harman is part of the narrative, and though not a Wycombe fan originally, evidently becomes enamoured with the club, the characters that punctuate it, and eventually considers the startling success surpassing some of the most sensational sporting stories he has been lucky to have observed throughout his career, with an emphatic, enthusiastic style of writing.

He is obviously in awe of Ainsworth, now the longest-serving boss in professional football, who Harman describes “as much groundsman as he was manager”. Having assured Wycombe’s survival with 53 points on the last weekend of the previous season, Ainsworth’s ultimate sign-off on the project was typically balls-to-the-wall: “Why not let the public that looked at football’s finances with utter incredulity appreciate what it took to manage a League One club that didn’t have a pot to piss in?

Harman takes us all the way back to the initial complaints of later July 2019 when all the players wanted were curtains for the briefing room at the training ground (the answer was no, so Ainsworth cut his own off and installed them there instead). It was a season that certainly promised ‘curtains’ for the Buckinghamshire side. Their second consecutive season in the third tier of English professional football was looking likely at beginning with a meagre seven outfield players and two goalkeepers. The prevailing mood, Harman describes, ‘was one of hopelessness.’ Instead, they ended it with entry into the second division of English football for the first time in their 133-year history. 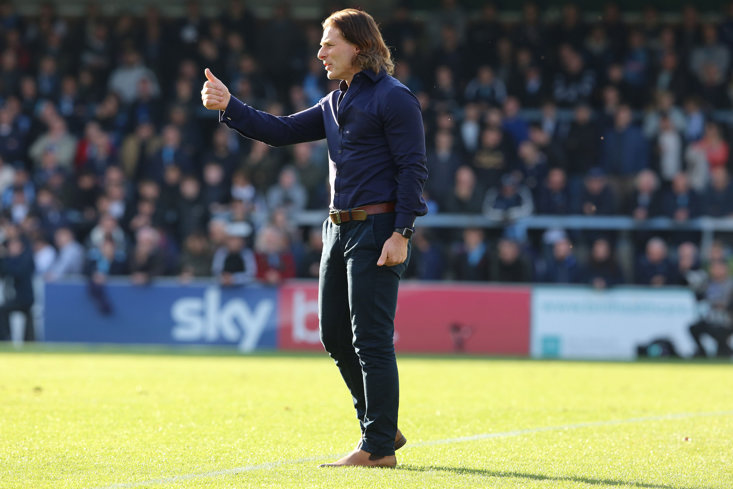 Though it becomes apparent that Harman’s stumbled upon a real underdog story, the project hit an unexpected snag midway through - namely a global pandemic. Harman still chronicles the players within the hiatus before returning to beat Oxford United 2-1 in the League One final at an empty Wembley Stadium.

Wycombe’s philosophy at the beginning of the campaign? “Let’s finish above 17th in League One this season.” They certainly achieved that.

Ultimately, despite the magnitude of their triumph, Close Quarters, a title referencing the club’s iconic quartered jerseys, emphasises the fine margins that mark success, including the morale-boosting takeover from American lawyer Rob Couhig that provides a major part of the narrative away from the pitch. Tragically, it could have been the now-defunct Bury to benefit, had it not for the owner Steve Dale being a ‘screwball’ in the words of Couhig’s nephew Pete. Indeed, that idea of being on a knife-edge even transcends this very book - Harman’s initial selection was his hometown Southend United (who eventually finished 22nd).

Harman, who has previously collaborated with Sir Andy Murray and David Beckham, makes you feel the sweat of both the dressing room and boardroom. ‘History is written by the victors’, but on this occasion, football is lucky that Harman was there along for the wild Wycombe ride to witness history in the making.