You may recognise the title of this book. You may even have belted it out yourself.

“In Sunshine or in Shadow” is a line from Danny Boy. It’s the song boxer Barry McGuigan’s father performed pre-fight by way of an anthem on the night his son fought Eusebio Pedroza for the world featherweight title in 1985.

McGuigan had trained with the legendary Gerry Storey in Belfast and although he came from the other side of the border, he didn’t want the Irish anthem sung – that might look like a republican endorsement. So the 27,000 spectators sang along to Danny Boy, many of their faces awash with tears, many of them from Ireland themselves, as the line caught in their throats.

“It was a communal recognition of the profound grief so many people had experienced for so many years – and yet it was mingled with the rare bursts of hope they felt on these extraordinary nights of boxing,” says Donald McRae.

The streets of Belfast, in contrast, “resembled a ghost town,” with everyone beside a television set to see if McGuigan could conquer the world. That fight is the culmination of this extraordinary book, about the work of a truly astonishing man – Storey – to show the positive impact of boxing in Belfast during the depths of the Troubles, beginning with Bloody Sunday in 1972.

For those who don’t remember, the “Troubles” doesn’t begin to do justice as an identifying label for the period. “The Atrocities” would be much more accurate.

In 1972 alone in Northern Ireland, 497 people died as a direct result of violence. Yet, “Boxing gave its fighters and trainers a form of diplomatic immunity to travel anywhere they chose,” says McRae.

And within boxing, Storey commanded such respect that he was able to move unmolested between Catholic and Protestant districts, often taking teams of boxers to areas their backgrounds would have made them fear to tread. As a trainer, he was peerless.

When his reputation came to the attention of the British Army, they sent a team of ten tough paratroopers to compete against Storey’s fighters. Storey’s men won every bout. Paramilitaries even take a break from shooting each other when Gerry Storey’s Cortina drives through the neighbourhood.

Of the hundreds, perhaps thousands of kids wanting to box pass through his Holy Family Boxing Club, McRae focuses on four.

Charlie Nash, who returned from a trip to fight in Dublin to find the Army had shot his brother Willie dead and wounded his father in the Bloody Sunday massacre in Derry, boxed for Ireland in the Munich Olympics just eight months later.

Davy Larmour, whose father was badly hurt by a republican car bomb, would travel from his Protestant Shankill Road home to train with Storey, a choice of training venue that made him “a candidate for an OBE – one behind the ear, as they said on the Shankill, with that ‘one’ being a bullet”.

Storey had to intervene and Loyalist leaders handed word down that Larmour was to be left alone. Hugh Russell, who often sparred and trained with Davy Larmour, fought against him in two epic contests for the British bantamweight title. 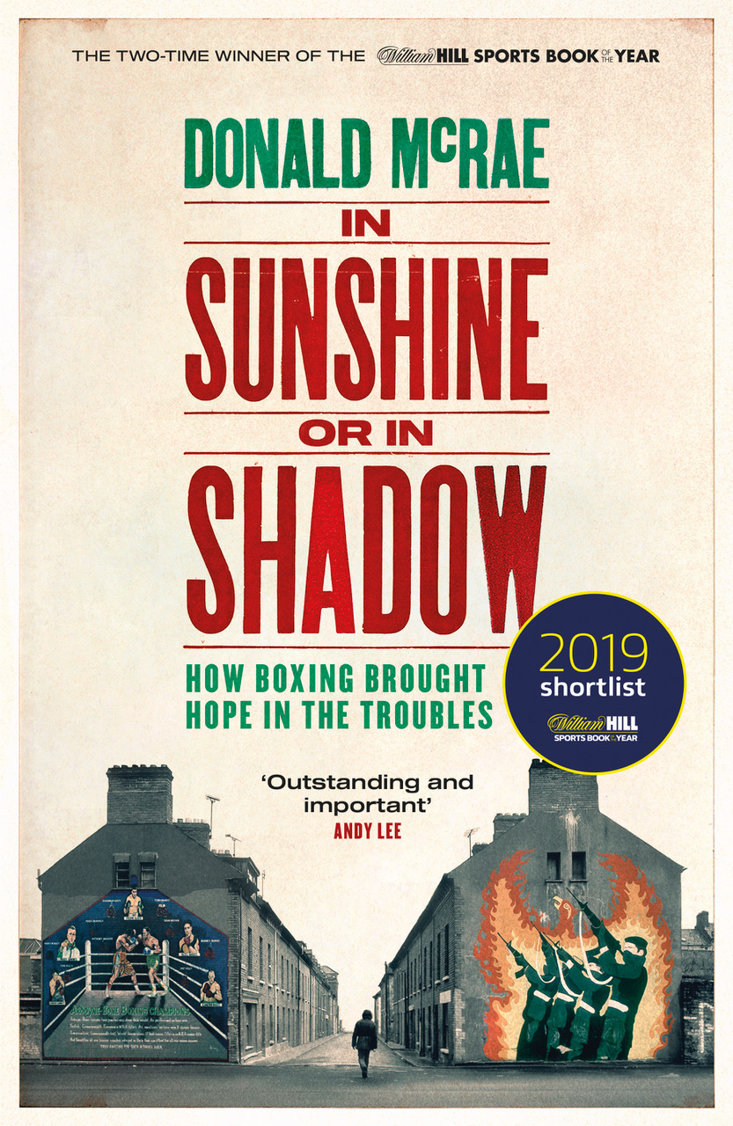 After the first, taxi driver Larmour has to drive himself to the hospital in Belfast to get stitched up. Russell’s trainer asks his if he wouldn’t mind giving Russell, also in need of a few stitches, a ride too. In the hospital, they are both assigned the same doctor, in adjoining cubicles.

“Eventually, a doctor walked in and came over to the bed. He took a long look at Davy’s face. ‘Oh my,’ he said. ‘You’ve been quite badly hurt. Who did this to you?’”

“Davy leant across and pushed the screen away. ‘He did,’ he said with a laugh as he pointed at Hugh who was also spread out, on the adjoining bed.”

The referee in that bout was in for an even bigger shock. His shirt had so much blood on it that the dry cleaner called the police, who suspected the referee may have murdered someone.

But it’s McGuigan who Storey picked as the man most likely to be a world champ one day.

From the first time he tried a boxing glove on in a derelict house, McGuigan found he could hit hard, and rapidly rose through smoky Northern Irish boxing halls against the political backdrop of the hunger strikes. Even training brought violent hazards – on a run through the notoriously lawless Divis Flats, a fridge launched from a high rise crashed down beside him. On another day it was an entire hind leg of a cow.

But things were rarely so picaresque.

"Boxing has a hardness and a coldness about it,” says McGuigan of the appeal of boxing to Ireland’s men of violence.

“Unlike any other sport, you risk your life in the ring. And to get to the top in boxing you have to endure immense pain. Boxers often come from very harsh backgrounds and the way they deal with adversity and hurt wins them massive respect with the paramilitaries. Boxing is a violent sport and it connected with these very violent people.”

Yet on that night against Pedroza in June 1985, at Queens Park Rangers’ football ground, it connected with everyone. McGuigan bestrode the world as a deserving and hugely popular champion. It would take years for the peace process to put an end to the era’s cycle of viciousness and suspicion, but within the worst of it, boxing was a beacon.

“The sadness was unbearable for so many,” says McGuigan, “but boxing gave people some light.

“That was the paradox," he says. "'Peace be with you' – and you were punching someone in the mouth. Boxing was an olive branch. Boxing allowed you to do things nobody else could do. It was a horrible, terrifying time. You look back and think: ‘Christ Almighty, did our neighbours and friends really do such barbaric things?’ But they did. It happened.”