Rugby
News
A meaty autobiography on one of rugby union's most amicable figures
Ed Needham
16:00, 19 Jan 2020

Halfway through this meaty autobiography, Warren Gatland, a confident and successful individual, comes across a figure he’s not entirely sure about - something called “the head of performance analysis and insight”.

Although describing this person as “outstanding” in his contribution to the Welsh national side, and the role of technological intrusions in his sport as inevitable, data sets and spreadsheets are not what has made Gatland the great improvisational coach of Ireland, Wales and the British Lions.

The Gatland school of thought is more thus: start with a bedrock of fitness, discipline and attitude, then find room for “instinct, for gut feeling, for the ability to reject orthodoxy and back hunch”. And having won, go for a beer.

You can measure aerobic capacity all you like, he says, “but it is difficult to know how the fittest of individuals will perform once they’ve taken a smack on the nose at the first ruck”.

Indeed, his chances of ever being a Ted-talking, CEO-in-waiting, flip chart and iPad type of coach were slim from the get-go.

Born in Hamilton, New Zealand, in 1963, he started playing rugby barefoot. And that was “proper rugby, not ‘tag’ or ‘touch’… always 15 players on each team, every one of them knocking lumps out of each other”.

Those were the days when a good spear tackle was applauded rather than severely punished, and after being knocked unconscious in one game and not knowing quite who he was sharing a field with, “It was up to me to come round quickly and get on with it”.

In his playing career, he was unlucky to have an even more granite hooker – Sean Fitzpatrick – ahead of him in the All Black pecking order and never went further than the bench against international opposition.

But his keen underdog spirit, amicable approach and innate ability to spot a team’s weaknesses and apply good ideas to fixing them really flourished when he became player-coach for Galwegians in the west of Ireland.

Fortunately, he had solutions in abundance, as the team only possessed two balls at the time (and one of them was flat), and the weather on the Atlantic coast was often so bitter the players had to rub each others’ backs to kickstart the circulation.

His ideas proved so transformative, however, that coaching jobs – and glory – with Connaught, Ireland and Wales followed. 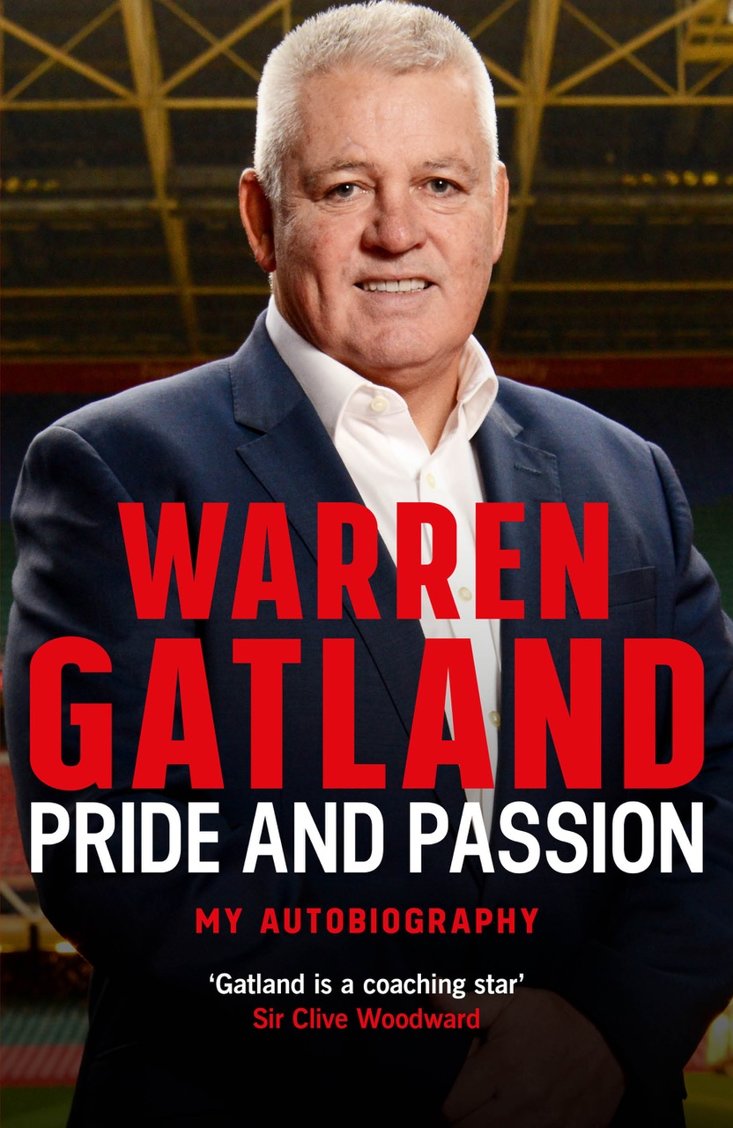 That natural rugby sense and willingness to back himself doesn’t pay off every time, but it only adds to his likability when he admits to his failures, such as when encouraging a pasty Irish touring side to boost their confidence with fake tan against South Africa.

When Paddy Johns, “the toughest of Ulstermen… ran on to the field in Bloemfontein, his face was bright orange,” he says. “It was like witnessing a second sunrise.” Johns is apparently yet to forgive him.

Yet amid the occasional farce, there is a lot of rugby, which coach Gatland is happy to describe in rich detail. Indeed, he gives the impression that “My Autobiography” could easily have stretched to several volumes, such is his command of the detail surrounding games.

For all his easy-going, let’s-have-a-Guinness, man-of-the-people charm though, he is more than capable of picking a squabble, with clueless administrators and the double-dealing press with their so-called “journalism” two of his more frequent targets.

But as rugby is sometimes also the pinnacle of perverse bloody-mindedness, there are some confrontations that not even the astute Gatland can come out on top of.

In 2017, after the Lions’ heroically tied series against the All Blacks, he found himself talking to one of the Welsh members of the victorious 1971 Lions tour to New Zealand, who described how he jumped up and shouted at the final whistle when Gatland’s team achieved their draw in the concluding match.

“I felt really happy that our success in squaring the series had brought him such pleasure,” says Gatland. But for once he’s misread an opponent. The old boy was happy Gatland hadn’t won, because that meant “We’re still the only team to have won a Lions Test series down there in New Zealand”. Cheers, mate.

More
rugby
Why Rugby League Is Desperate For Government Help Amid Coronavirus...
On Sunday, rugby league had a rare moment in the spotlight. With no football on, Sky Sports invited [ ... ]
rugby
Book Review: Rory Best - My Autobiography
The last few years have been among the sunniest in the Ireland rugby team’s history. Yet [ ... ]
rugby
Eyewatering! 857 Million People Across The Globe Tuned In To...
Approximately 200 years ago, the world’s population was estimated at around 800 million people.  [ ... ]
rugby
Eddie Jones Admits ''I Don't Enjoy Coaching'' As Talks Linger...
Eddie Jones was not giving anything away when asked about his England future but did admit he doesn’t [ ... ]
rugby
New Look Wales Are Vulnerable To England's Intelligent Six Nations...
It’s no secret that, on their day, England have a power game to match most teams in world rugby. [ ... ]
rugby
Eddie Jones Is Determined To Squeeze Every Last Drop Out Of...
Eddie Jones’ team selection for England v Ireland got a lot of headlines, with five locks and [ ... ]
rugby
Huge Fall In Concussions At Rugby World Cup After Successful...
Rugby’s new high-tackle rule saw a huge decrease in concussion incidents at last year’s [ ... ]
rugby
England Channelled Their Inner Tyson Fury To Pummel Ireland...
Onslaught. According to the Oxford English Dictionary, the definition is: “an onset, assault, [ ... ]
rugby
Six Nations 2020: The Recent History Of England And Ireland's...
In a tournament packed with fierce and historic rivalries, England vs Ireland is a doozy. The history [ ... ]
rugby
Six Nations 2020: Can Wales' Defence Be The Difference Vs Recent...
Two nations once renowned for the flair have, in recent years, been written about for rather different [ ... ]
rugby
Six Nations 2020: Italy And Scotland Fight To Avoid The Wooden...
The match between Italy and Scotland has often been dubbed “the battle for the wooden spoon” [ ... ]
rugby
Russell Vs Townsend Is The Talk Of The Six Nations But What's...
Forget the Le Crunch, Calcutta Cup, England vs Wales, and the battle for the wooden spoon. This Six [ ... ]
rugby
Huw Jones: How A Sleepless Night Was The Making Of The Scotland...
It was a stranger’s bout of insomnia which brought Huw Jones to live out his Six Nations dream. [ ... ]
rugby
Eddie Jones Turns Defeat Into Victory With His Very Own Six...
It ended up being a threat more than a promise, but Eddie Jones' decision to name six forwards on [ ... ]
rugby
Owen Farrell Is A Leader Of Men - But Is He The Best Man To...
Alun-Wyn Jones has always been a leader. Ask anyone. But, for years, the softly spoken Sam Warburton [ ... ]
rugby
Meet The Englishman Teaching France To Play Like Wales In The...
It was in the home coaching box of the Stade de France that Shaun Edwards found himself on Sunday afternoon [ ... ]
rugby
Shaun Wane: A Proud Englishman And The Perfect Leader Of A New...
In appointing Shaun Wane as head coach, England’s rugby league team have injected everything that [ ... ]
rugby
Six Nations Big Questions - Why Do Italian Rugby Fans Keep Coming...
Here’s a stat for you - Italy have played 98 games in the Six Nations since they joined in [ ... ]
rugby
Six Nations Gamechanger - Amazon Launch The Most In-Depth Live...
Ever wanted to know the likelihood of a fly-half making a conversion or see just how effective your [ ... ]
rugby
''Absolutely Outstanding'' - Eddie Jones On That Time Fergie...
England head coach Eddie Jones has revealed to the England Rugby Podcast: O2 Inside Line exactly what [ ... ]
rugby
Six Nations 2020: Is It Time To Limit The Number Of Subs In...
In the run-up to the Six Nations this week, Nigel Owens has added his Welsh lilt to the growing [ ... ]
rugby
34 Players, 11 Different Clubs, 8 New Caps - Eddie Jones' Six...
Eddie Jones has named his England squad for this year’s Six Nations with 10 absentees from last [ ... ]
rugby
How Greece Beat Their Own Government To Set Up England World...
Under the cover of darkness, the coaches slipped away from the hotel with the passengers on-board unaware [ ... ]
rugby
Inspirational Captain Kolisi Takes Top Rugby Writer's Accolade...
The Rugby Union Writers’ Club has awarded one of their highest accolades to South Africa’s [ ... ]
rugby
New Coach Warburton Calls for ''Cool Heads'' From Six Nations...
Sam Warburton hung up his boots at the age of 29 and is now immersing himself in the world of coaching. [ ... ]
rugby
Sinfield Blown Away As Sell-Out Crowd Celebrates Rugby League...
Former Leeds Rhinos and England captain Kevin Sinfield has hailed the “unbelievable" show [ ... ]
rugby
Oops! These Are The Clumsiest Players And Teams Lining Up For...
The Six Nations is less than a month away as England, Ireland, Wales, Scotland, France and Italy gear [ ... ]
rugby
Book Review - Rugby: Talking a Good Game
Ian Robertson, the former BBC rugby commentator and one of its last distinctive voices of sport, left [ ... ]
rugby
''Many Things Went Very Well'' Claims GB Chief After Lions Tour...
The chief of UK rugby league has stunned Great Britain supporters by claiming “many, many things [ ... ]
rugby
Canterbury Renew British & Irish Lions Kit Deal Ahead Of 2021...
Canterbury will again partner with British & Irish Lions and supply all kit and training wear for [ ... ]
This website uses cookies
Cookies help us and our partners provide statistics. By browsing this website, you consent to the use of cookies in accordance with our Privacy Policy and Cookies Policy.
Accept & Close