The last few years have been among the sunniest in the Ireland rugby team’s history. Yet as the brain’s sporting memory function struggles to perceive much beyond recent results, a disappointing 2019 World Cup tends to ruin attempts to look back with satisfaction over the achievements of the last five years.

Push through the gloom though, and the glories come thick and fast. Ireland’s first-ever victory over the All Blacks in 111 years, at Soldier Field in Chicago in 2016. Winning in South Africa for the first time ever that same year. Winning the Grand Slam at Twickenham in 2018 to set a new Irish record of 12 wins on the trot, then beating the All Blacks again later that year to record a first-ever victory against them in Ireland.

The sensation may have been an unfamiliar one, but this was a team that deserved its ranking as World Number One. And leading them onto the field for that string of extraordinary landmarks was a slightly improbable “shy, fat farm boy” from Poyntzpass, Armagh, the very modest hooker Rory Best.

By the time he retired at 37, after Ireland’s last game in the World Cup last year, given short shrift by New Zealand in the quarter-finals, he had amassed 124 caps, 38 as captain, the kind of numbers that hint at being a bit of a Big I Am. My Autobiography, however, tells a different story.

This is a man with self-doubt to spare and who constantly needs reminding, by self and others, that he’s there on merit. There’s no questioning his love of the sport or commitment – in 2013 he famously broke his arm tackling an All Black and piled back in, arm flapping, for more defensive heroics before the team doctor had to gently tell him his game was over.

But whereas elite performers tend to display a single-minded focus on seeing how far their talent can take them, Best is a one-club man, staying put at trophy-deprived Ulster because he couldn’t bear the thought of not being there were they to win anything. And even being made captain of the national side comes with a large dose of panicked reflection. 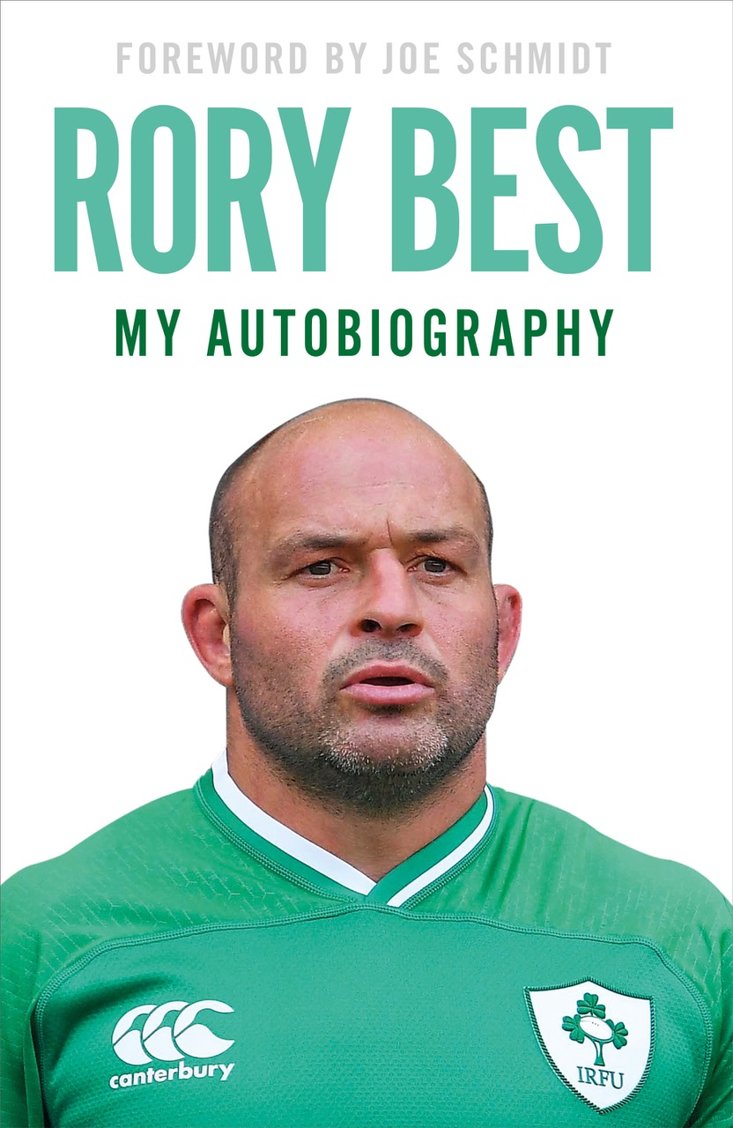 Initially elated, “It wasn’t long before that feeling gave way to one of dread,” he says, and the daunting prospect of telling a dressing room of stars what he expects of them keeps him awake all night. His response early on to criticism of his line out throwing (a sore point throughout his career) was to turn an enormous piece of old heavy agricultural machinery into a “throwing machine”. No sports psychology or specialist coaching there.

Indeed, there’s something of the throwback about his entire career, both off the field, where he identifies just two interests (family and beer, the latter being very much of the “up till 6am, found some old boots to drink out of” variety) and on it.

As recently as 2007, he says, “It is frightening how unprepared we were as a pack of forwards. We didn’t even have a scrum coach. All we did was try to push harder than the opposition.”

He is generous with his praise for the great leaders he worked under, most of all Joe Schmidt, the architect of much of Ireland’s recent success, and is classy enough to keep it dialled down on the pages regarding Irish rugby politics.

The most abiding image though, is the one of him being given a guard of honour by the All Blacks following that World Cup exit – an honour few in rugby can have experienced – and Best not knowing where to look. So to anyone from a farming background who has weight and confidence issues and is wondering when life is going to start, remember: all is not lost.

x
Suggested Searches:
Tyson Fury
Manchester United
Marcus Rashford
Lewis Hamilton
F1
Air Jordan
More
rugby
Poor Officiating Puts Dampener On Wales Win Over England That...
Wales have kept their hopes of a Grand Slam alive, secured a bonus point and won the Triple Crown, with [ ... ]
rugby
England Need To Be Cool, Calm And Composed Against Wales In...
Eddie Jones is imploring his England side to be on the alert for any scheming from Wales captain Alun [ ... ]
rugby
France v Scotland Six Nations Game Called Off After Latest Positive...
France’s upcoming Six Nations match against Scotland, due to take place this Sunday, has been [ ... ]
rugby
Jack Nowell Aiming For England Recall When He Returns From Injury
England and Exeter winger Jack Nowell looks set to return to action in March after being sidelined for [ ... ]
rugby
Can Eddie Jones Really Blame A Lack Of Fans For England's Six...
England’s start to the Six Nations has been underwhelming to say the least. An opening day defeat [ ... ]
rugby
It Wasn’t Pretty But England Get Back On Track In The Six Nations...
It wasn’t pretty and wasn’t as easy as past England triumphs over Italy but Eddie Jones’ [ ... ]
rugby
How The Six Nations Has Become A Pivotal Moment In Eddie Jones'...
England’s shock defeat to Scotland last weekend certainly threw up more questions than answers [ ... ]
rugby
Six Nations Blown Wide Open With Scotland's First Win At Twickenham...
This year is different. How many times have we heard that over the last twelve months? The global pandemic [ ... ]
rugby
Eddie Jones' Mind Games Can Only Help To Fuel Scotland's Fire...
Eddie Jones has been at the mind games, but it feels like he needn’t really bother. Scotland arrive [ ... ]
rugby
Betfred Super League To Return Without Scrums Due To Covid-19...
The Betfred Super League season will begin without scrums following confirmation from the RFL board [ ... ]
rugby
Three Reasons Why England Winning The Six Nations Isn't A Foregone...
England go into the 2021 Six Nations in imperious form. The defending champions have finished outside [ ... ]
rugby
England’s Beno Obana And Maro Itoje Tackle Race In Rugby In...
Rugby Union has a race issue. It’s uncomfortable to talk about or even acknowledge but it’s [ ... ]
rugby
Hard Men Of Rugby, The Book That Revels In The Legendary Tough...
The famous maxim goes that 'football is a game for gentlemen played by hooligans, and rugby union [ ... ]
rugby
‘Rob Burrow: My Year With MND’ Is Emotional, Educational And...
“I’ve too many reasons to live. I’m not giving in ‘til my last breath.” [ ... ]
rugby
The Rugby Playing Ninja DJ, Welcome To The Many Lives Of James...
Sport, and rugby in particular, needs James Haskell. Brash, outspoken and at times just plain crackers, [ ... ]
rugby
Book Review - Pride And Passion By Warren Gatland
Halfway through this meaty autobiography, Warren Gatland, a confident and successful individual, comes [ ... ]
rugby
Eyewatering! 857 Million People Across The Globe Tuned In To...
Approximately 200 years ago, the world’s population was estimated at around 800 million people.  [ ... ]
rugby
Eddie Jones Admits ''I Don't Enjoy Coaching'' As Talks Linger...
Eddie Jones was not giving anything away when asked about his England future but did admit he doesn’t [ ... ]
rugby
New Look Wales Are Vulnerable To England's Intelligent Six Nations...
It’s no secret that, on their day, England have a power game to match most teams in world rugby. [ ... ]
rugby
Eddie Jones Is Determined To Squeeze Every Last Drop Out Of...
Eddie Jones’ team selection for England v Ireland got a lot of headlines, with five locks and [ ... ]
rugby
Huge Fall In Concussions At Rugby World Cup After Successful...
Rugby’s new high-tackle rule saw a huge decrease in concussion incidents at last year’s [ ... ]
rugby
England Channelled Their Inner Tyson Fury To Pummel Ireland...
Onslaught. According to the Oxford English Dictionary, the definition is: “an onset, assault, [ ... ]
rugby
Six Nations 2020: The Recent History Of England And Ireland's...
In a tournament packed with fierce and historic rivalries, England vs Ireland is a doozy. The history [ ... ]
rugby
Six Nations 2020: Can Wales' Defence Be The Difference Vs Recent...
Two nations once renowned for the flair have, in recent years, been written about for rather different [ ... ]
rugby
Six Nations 2020: Italy And Scotland Fight To Avoid The Wooden...
The match between Italy and Scotland has often been dubbed “the battle for the wooden spoon” [ ... ]
rugby
Russell Vs Townsend Is The Talk Of The Six Nations But What's...
Forget the Le Crunch, Calcutta Cup, England vs Wales, and the battle for the wooden spoon. This Six [ ... ]
rugby
Huw Jones: How A Sleepless Night Was The Making Of The Scotland...
It was a stranger’s bout of insomnia which brought Huw Jones to live out his Six Nations dream. [ ... ]
rugby
Eddie Jones Turns Defeat Into Victory With His Very Own Six...
It ended up being a threat more than a promise, but Eddie Jones' decision to name six forwards on [ ... ]
rugby
Owen Farrell Is A Leader Of Men - But Is He The Best Man To...
Alun-Wyn Jones has always been a leader. Ask anyone. But, for years, the softly spoken Sam Warburton [ ... ]
rugby
Meet The Englishman Teaching France To Play Like Wales In The...
It was in the home coaching box of the Stade de France that Shaun Edwards found himself on Sunday afternoon [ ... ]