Starter for ten: in which sport might this paragraph be found early in the historical record of an extraordinary athletic career?

“Tanya rolled up early in the afternoon. ‘Hiya, Sherman,’ she hollered, her voice ringing with affection as she climbed out of the truck. ‘How are you, little man?’ To me, her tone was a little more grave. ‘He’s going to need a sheath cleaning right away.’”

Tricky one, right? You’d be on the right track with something equine, although even the author is baffled, guessing that “the sheath” refers to some sort of horse blanket, except he doesn’t have one. “I guarantee you, he’s got a sheath,” says Tanya. “I’m looking at it right now. It’s his penis.”

Not even in the wide world of sports, which has room for shin kicking and rabbit show jumping, is there a place for competitive genital hygiene. Yet there is room for distance burro racing, and as Sherman is a burro – a donkey – and his new owner eager to try this strange event, the stars align for both man and beast in this moving and unusual book.

Before that path of sporting magnificence can show itself though, Sherman comes to writer Christopher McDougall in a lamentable state. Rescued from the squalid and traumatising possession of a mentally ill owner, his hoofs have grown out longer than a man’s foot and first need trimming with a hacksaw (there are pictures). Barely able to walk, poor old Sherman’s prospects are initially grim.

But nurtured tenderly back to some sort of donkey equilibrium at the author’s farm in one of Pennsylvania’s most eccentric Amish counties, man and beast find they make the ideal couple for burro racing, which McDougall discovered while in Colorado to cover an ultramarathon. 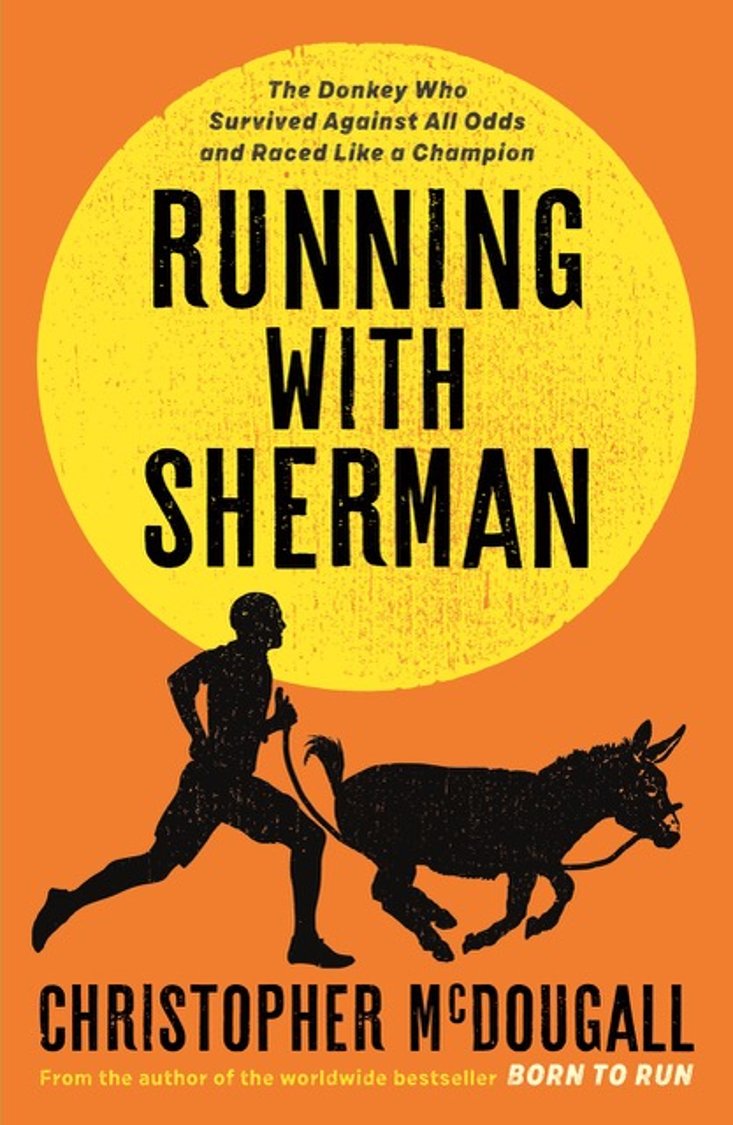 The town of Leadville, high in the Rockies, had saved itself from extinction following mine closures by rebranding as a sort of centre of extreme western adventure sports. In burro racing, which makes no gender distinctions, the human runs alongside the animal as if trotting beside a giant dog, although some of the donkeys are the size of horses and all combine awesome strength with unpredictable personalities.

Fathoming the depths of the donkey psyche are key to this book – and success in this sport – as McDougall learns, step by improvisational step, how to work with his new pal’s fears and motivations. How does one coax movement from a creature determined to mimic a block of concrete? How does one combine with a mind that is terrified of a puddle on a road, especially knowing that the Colorado route involves crossing white water creeks?

These lessons and many others have to be learnt by trial and error, attempting solutions suggested by dreams, studying Sherman’s interactions with his fellow distance-running donkeys, and soaking up the wisdom of experienced burro racers, many of whom are hard as nails.

Local Amish distance runners, who compete in long black trousers and braces (men) and ankle-length skirts (women), are fairly tasty at roadwork with a speeding donkey too, and happily share their insight. If this all sounds comic and faintly ludicrous, especially as the competitive donkeys have to be loaded with Buckaroo style gold-mining items in reference to their working past, it’s not without its whimsy.

But it’s also full of people who know they need help – economic, physical and most especially with the full range of mental health challenges that the 21st century has to offer – and who find enlightenment, inspiration and support in this bizarre activity.

Besides bringing the story of Sherman and those he touches vividly to life, McDougall is also very strong on dismantling Amish stereotypes and covering the immense advantages that come from human/animal interaction.

And if you really need to know just what’s needed to keep your donkey’s most tender plumbing fresh, there’s guidance there too.