Boxing
News
Here are five stories you might have missed in a busy week of boxing
Kieran Spratt
09:00, 06 Nov 2020

Dillian Whyte’s 2020 has taken another turn for the worst, the boxing world reacts to that sensational video from Deontay Wilder, and another star of the super exciting lightweight division gets ready to make a statement this weeknd. Here are five boxing stories you might have missed...

“Stop Being A B*tch,” Boxing World Reacts To THAT Deontay Wilder Video

American heavyweight Deontay Wilder really chucked the cat amongst the pigeons at the weekend when he released a sensational video on social media in which he blamed everything from tampered gloves to a water bottle laced with a muscle relaxer for his defeat to Tyson Fury in February.

Unsurprisingly, in the big, bad world of boxing, fighters tend to turn their noses up at another fighter’s excuses, and Wilder’s meltdown was no different. Teofimo Lopez, who recently stunned the world by defeating Vasyl Lomachenko, told Sirius XM, "I think Wilder has had too much time on his hands. He needs to focus on his own damn self, go back in the gym, get ready for a fight. Stop talking about a dent in your head. You're a grown-ass man, stop being a bitch."

Joshua, on the hand, couldn’t help but feel a little vindicated after Wilder let slip in the video that he’d been offered more money to face the 2012 Olympic gold medallist instead of Fury, despite saying otherwise at the time. Speaking to Sky Sports, Joshua said, “When time goes by, naturally the truth will always reveal itself. He admitted it. We made him a lucrative offer, but he wanted to face Fury. If that's what he wanted, fine. But he dragged my name through the mud.”

Whyte, who has gone back and forth with the Alabaman a lot over the years, told Sky Sports he doesn’t expect to see Wilder fight again, "I don't think we'll see him in the ring ever again. He's a coward and a disgrace. The way he's acted, blaming everyone apart from himself, getting rid of the only person in his corner who knows boxing? It's weird.”

Dillian Whyte vs Alexander Povetkin Rematch Pushed Back To 2021

Dillian Whyte just doesn’t seem to be able to catch a break does he? He spends over 1,000 days as WBC mandatory only to be blitzed by Alexander Povetkin and have his title hopes extinguished. Now, the rematch with Povetkin scheduled for November 21, has been pushed back until early 2021, likely January 30, with the Russian heavyweight having tested positive for Covid.

Incredibly, having only fought Oleksandr Usyk at the weekend, Dereck Chisora threw his hat in the ring to face his old rival Whyte for a third time, despite only having mere weeks to prepare for it. However, as exciting as that would be, it seems very unlikely we’ll see Chisora vs Whyte III materialise out of nowhere this month, instead Conor Benn will headline the now non-PPV card against Sebastian Formella.

Since turning pro in 2017, on the back of his Team GB appearance in Rio in 2016, Lawrence Okolie’s accent to the top has been a swift one and on December 12, on the undercard of Anthony Joshua’s heavyweight showdown with Kubrat Pulev at the 02, he will square off with WBO cruiserweight world champion, Poland’s Krzysztof Glowacki.

The shot at the world title will be the unbeaten Okolie’s 15th professional fight and Glowacki, whose only defeats in 33 fights came on the scorecards to the uber-talented pairing of Oleksandr Usyk and Mairis Breidis, will certainly be 27-year-old’s toughest test so far.

"It has been a long and hard road to get here," said Okolie. "I'm very excited and blessed to have this opportunity; I'll be grabbing it with both hands. I will become Britain's next world champion on December 12.

"He's a former two-time world champion and has only lost twice to two elite opponents. He's going to be my biggest test on paper as a professional. He is a consummate professional and will do everything in his power to win.

Daniel Dubois vs Oleksandr Usyk Could Be “Made In A Heartbeat” 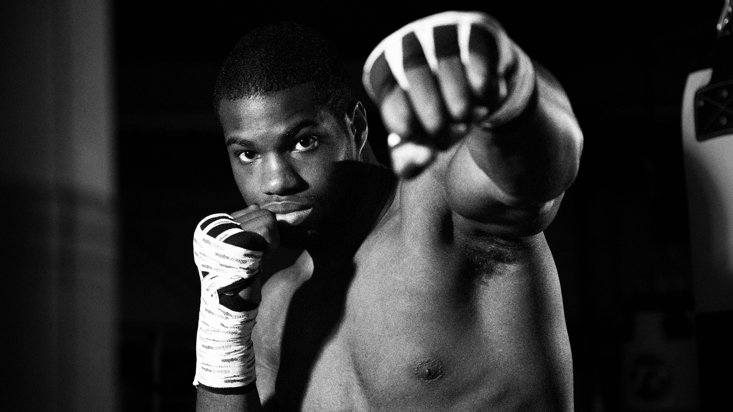 And so the heavyweight merry-go-round spins on and on. Now, Daniel Dubois, who faces fellow British heavyweight Joe Joyce on November 28, has been described by his promoter Frank Warren as a potential contender for the WBO crown in the near future, with Ukrainian wizard Usyk mooted as an opponent.

Speaking to TalkSport, Warren said, "Daniel Dubois is ranked number two by the WBO now, Usyk is the [WBO] mandatory and Joshua is talking about vacating the title. If he does, Daniel will fight Usyk, providing he beats Joyce on Nov 28th. If that fight's there, I would do that in a heartbeat."

Jam-packed with talent, the lightweight division is arguably the most exciting weight class in boxing right now and after Teofimo Lopez stunned the world against Lomachenko and Gervonta Davis made an emphatic statement against Leo Santa Cruz with a devastating uppercut, it means the pressure is on Devin Haney in Florida this weekend.

‘The Dream’ faces veteran Cuban and wily operator Yuriorkis Gamboa on Saturday night knowing that not only does he have to win, but he needs to win emphatically if he wants to stand out from the crowd.

“I don’t just want to win; I want to win spectacularly,” said Haney. “I want to beat Gamboa worse than anyone has to date. I want to show him that I am the best fighter in the world and better than anyone he’s ever faced.

“I have to make a statement. The eyes of the boxing world are all on me again. They’ve heard me talk the talk, and now it’s time to walk the walk.

x
Suggested Searches:
Tyson Fury
Manchester United
Marcus Rashford
Lewis Hamilton
F1
Air Jordan
More
boxing
We Will See The Best Of Billy Joe Saunders Against Canelo, Says...
With disputes over ring size looking to have been finally put to bed, having nearly derailed fight week [ ... ]
boxing
Billy Joe Saunders Follows Tyson Fury's Blueprint As Canelo...
One of the biggest fights of 2021 looks to be back on the cards after the ring dispute has been ‘sorted’ [ ... ]
boxing
Billy Joe Saunders Threatens To Walk From Canelo Fight Over...
Billy Joe Saunders has said he will walk away from his fight with Mexican superstar Canelo this weekend, [ ... ]
boxing
Tyson Fury ''Frustrated'' By Delays To AJ Unification Bout,...
Ahead of Tyson Fury’s epic heavyweight showdown with Anthony Joshua, his co-trainer Andy Lee believes [ ... ]
boxing
Eddie Hearn Believes “Maverick” Billy Joe Saunders Can Beat...
WBO super-middleweight world champion Billy Joe Saunders is in action against pound-for-pound superstar [ ... ]
boxing
Lennox Lewis Confirms He’s “Talking” With Mike Tyson Over Exhibition...
When Mike Tyson and Lennox Lewis finally fought as professionals in 2002, it might have happened far [ ... ]
boxing
Joseph Parker Beats Derek Chisora Amid Controversy As Katie...
Joseph Parker has beaten Derek Chisora by a split decision in Manchester (115-113 Chisora, 116-111 Parker, [ ... ]
boxing
Eubank Jr Needed Someone He Trusted Says Trainer Roy Jones Ahead...
Chris Eubank Jr steps into the ring for the first time since the end of 2019 when he takes on Marcus [ ... ]
boxing
Eddie Hearn Says Bob Arum Has Been Putting On The Pressure Over...
Promoter Bob Arum has been a key figurehead in boxing for more than half a century and has been involved [ ... ]
boxing
Bob Arum Makes Joshua vs Fury Claim - Five Boxing Stories You...
There's a busy weekend of boxing on the way with Derek Chisora taking on Joseph Parker in Manchester [ ... ]
boxing
Derek Chisora Insists He 'Puts The Fear Of God' Into Joseph...
Derek Chisora believes former WBO Heavyweight world champion Joseph Parker will run when the two fight [ ... ]
boxing
Natasha Jonas Says She Has ''Unfinished Business'' With London...
Liverpool super-featherweight Natasha Jonas says she has "unfinished business" with former [ ... ]
boxing
Everything You Need To Know About The Joseph Parker Vs Dereck...
This weekend Joseph Parker will be looking to make himself a contender for a world title once [ ... ]
boxing
''Cinderella Man'' Steve Robinson Now Aiming To Transform The...
As rags-to-riches sports stories go it takes some beating. One day Steve Robinson was stacking shelves [ ... ]
boxing
Lucas Browne Blitzed By NRL Legend, Five Boxing Stories You...
A former heavyweight contender was blitzed inside a round by a former rugby legend, Conor McGregor’s [ ... ]
boxing
Floyd Mayweather vs Logan Paul: Everything You Need To Know
It’s the fight we’re pretty sure nobody asked for but Floyd Mayweather’s bout against [ ... ]
boxing
Ben Askren Says He 'Let The World Down' After Losing Jake Paul...
Former UFC fighter Ben Askren has said he ‘let the world down’ after losing Saturday’s [ ... ]
boxing
Middleweight Marcus Morrison Answers the Call That Could Change...
It was many happy returns for Marcus Morrison when he received the phone call that could change his [ ... ]
boxing
Everything You Need To Know About Jake Paul And Ben Askren's...
After months of trash talk, the battle between YouTuber Jake Paul and former MMA star Ben Askren finally [ ... ]
boxing
Claressa Shields Fight Could Happen At End Of Year, Says Savannah...
It’s one of the biggest fights to be made in women’s boxing and according to WBO middleweight [ ... ]
boxing
Tyson Fury And Anthony Joshua Agree To Fight In Saudi Arabia,...
Anthony Joshua and Tyson Fury have agreed to fight in Saudi Arabia, according to reports. With the winner [ ... ]
boxing
De La Hoya In ''Talks'' With Eddie Alvarez, Five Boxing Stories...
Oscar De La Hoya has found his “big name” UFC opponent, Anthony Joshua and Tyson Fury’s [ ... ]
boxing
Claressa Shields Finds Opponent And Venue For MMA Debut In June
Two-time Olympic gold medallist Claressa Shields has found an opponent and venue as she makes the swap [ ... ]
boxing
Chris Eubank Jr Wants ''End Game'' Gennady Golovkin And Targets...
Chris Eubank Jr may have been out of the ring for the entirety of 2020 but he returns on May 1 in Manchester [ ... ]
boxing
Paintball, Pogba and Me: Marcus Morrison Talks Football And...
Marcus Morrison will soon take aim at Chris Eubank Jr, but it won’t be the first time he has had [ ... ]
boxing
Evander Holyfield, 58, Set To Take On Former Mike Tyson Foe...
Heavyweight legend Evander Holyfield looks to have found an opponent for his long speculated return [ ... ]
boxing
Conor Benn Destroys Samuel Vargas In Just 80 Seconds And Calls...
Conor Benn was in explosive form on Saturday night, blitzing Samuel Vargas with a swathe of shots which [ ... ]
boxing
“Mature” Conor Benn Confident He’ll Rise To The Challenge Against...
Conor Benn takes another step up in his promising career on Saturday night when he takes on grizzled [ ... ]
boxing
Whyte Willing To Go To Alabama For Wilder Fight, Five Boxing...
Dillian Whyte is willing to go to Alabama to set up a clash with Deontay Wilder, Claressa Shields is [ ... ]
boxing
Eddie Hearn Would Love To See A Two-Fight Series Between Ngannou...
Last week, newly-crowned UFC heavyweight champion Francis Ngannou announced his long held desire to [ ... ]