Horse Racing
News
We should be in for a remarkable evening of racing
Paul Quigley
13:02, 05 Nov 2021

The Breeders' Cup gets underway on Friday night at Del Mar in Southern California, with a brilliant couple of days' racing guaranteed. Day one should see a few chances to get ahead...

Trainer Wes Ward has won the last two running’s of this race with Saturday’s Turf Sprint favourite Golden Pal taking this last year. He’s is triple-handed here with Averly Jane and Twilight Gleaming heading the market. The first-named is perfect in four career starts including a three length success over Kaufymaker in a stake at Keeneland last month. Twilight Gleaming went close in The Group 2 Queen Mary at Royal Ascot before landing a listed race at Deauville in August. She’s fresh and should appreciate getting back on sound surface. At about 4/1, she may be the best play of The Ward team.

There are plenty of British and Irish trained runners in this race that could contend. Twilight Jet has been well-backed ante post. The Group 1 Middle Park placed Armor comes out of the best race. The pair are worth considering but maybe a small wager on Hierarchy at about 16/1 is the way to go. The mount of Oisin Murphy has improved in each of her four career starts. She needs to take another step forward here but has a look of a work in progress for trainer Hugo Palmer.

Echo Zulu is the first of quite a few short prices in dirt races over Breeders’ Cup weekend. Steve Asmussen’s filly has won all three careers starts. The last two were Grade 1’s by open lengths at Saratoga and Belmont. In the first, she beat Tarabi. What stamped her as a worthy favourite for this race was a seven plus win over a mile early last month. She probably has the early speed to make the lead here but draws well to sit just behind any runner who is gunned for the front.

Echo Zulu ticks all the boxes except for she is unproven over two turns. If her stamina does run out, Hidden Connection and Juju's Map may be able to take advantage. Both have graded stakes victories in Kentucky over today’s trip. Hidden Connection put a weakish field to the sword at Churchill. Juju's Map won in Grade 1 company nicely at Keeneland.

Trainer Chad Brown has won the Breeders’ Cup Juvenile Fillies’ Turf a record five times and this year relies on two smart types, Haughty and Consumer Spending. The former won a Keeneland maiden in taking style when last seen, meanwhile the latter looks to be Brown’s main hope and looked potentially top class when easily winning at Laurel Park last month. The daughter of More Than Ready is drawn in seven and is the selection at the prices.

There are a number of dangers however, including the likes of Arnaud Delacour’s Koala Princess who is unbeaten as well as Bubble Rock for Brad Cox who won this race last year with Aunt Pearl.

Surprisingly the Europeans have only ever won two renewals but have four contenders in the line-up this year, with Mise En Scene looking like the main hope. Trained by emerging trainer James Ferguson, the Qatar Racing-owned filly ran well in the Fillies’ Mile when last seen at Newmarket and if she can break well, she could go close.

Ernie Belmonte
@ErnieBPhoto93
Echo Zulu galloping this morning in preparation for the BC Juvenile Fillies. #BC21 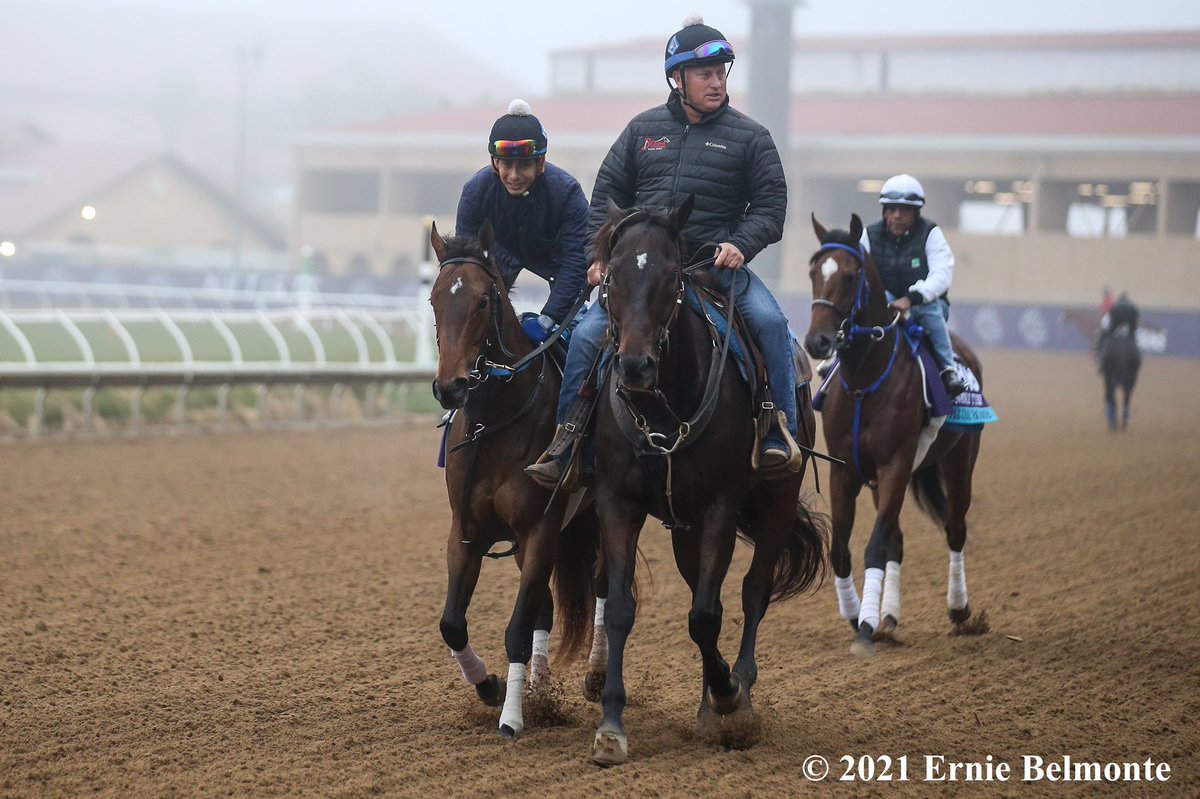 Many will have Chad Brown’s Jack Christopher as one of the bankers of the meet. Based on his clear-cut victory in Belmont’s Grade 1 Champagne Stakes, it’s hard to argue with them. It followed a wide margin maiden win on debut. He stalked a quick pace and still won by almost three lengths. That despite carrying the baton through swift fractions in the middle part of the race. The only possible knock on him is whether this extended mile may be find him out, if he is chases the pacesetters hard here.

Commandperformance had strictly no excuses when runner up to Jack Christopher last month. The chances are the late runner gets a similar pace set up. He looks a solid each way play at about 5 or 6/1. If the rail-drawn runner cracks a little late on, he could run him and the rest down. He’s not the only viable alternative to the favourite. Bob Baffert has three possibilities. Pinehurst and Corniche are Grade 1 winners in California. The last named was too good for Pappacap and Oviatt Class last time.

Selection: No10 Commandperformance (each way)

The Breeders’ Cup Juvenile Turf has often been won by the Europeans, with Aidan O’Brien winning a record four renewals and the master of Ballydoyle has just one contender this year. Last seen winning a Group 3 contest in Ireland, Glounthaune was slightly disappointing when sixth in the Group 1 Dewhurst at Newmarket and will need to considerably improve to be competitive.

Hugo Palmer’s Dubawi Legend also ran in the Dewhurst and pushed the eventual winner all the way by finishing second. Having been sent off as the market leader for the Acomb Stakes, the son of Lovely Pass disappointed at York but looked back to his best at HQ and should go close at Del Mar despite having a bad draw.

Godolphin have won this twice with Outstrip and Line Of Duty, who were both trained by Charlie Appleby and the Derby winning trainer has two chances in the race this time around. Modern Games is considered by many to be his main hope after taking the Tattersalls Stakes in impressive style when last seen, meanwhile Albahr won the Grade 1 Summer Stakes at Woodbine back in September and will have Frankie Dettori on board once again.

The selection however is Tiz The Bomb. Owned by Phoenix Thoroughbreds, the son of Hit It A Bomb (who won this race in 2015) recently won the Grade 2 Bourbon Stakes, which is often seen as a good trial for the Juvenile Turf and with a perfect draw in four, the Kenneth McPeek-trained could run a big race at a decent price.

Selection: No4 Tiz The Bomb