Defending champion Gamine will be odds on to make it two in a row. Bob Baffert’s filly has reigned supreme in one turn races in the last 18 months or so. Since her victory at Keeneland, she has justified odds-on favouritism in a quartet of starts. She stalked a hot pace set by a speedy rival in 2020 and may do here again. Bella Sofia is a fast improving three-year-old. She won a Grade 2 and Grade 1 in New York since upped in class. There is a chance she is used up trying to put it up to Gamine.

If the favourite is at her best, she won’t be beaten. If Bella Sofia can take her out of her comfort zone early, Ce Ce has a chance of running the pair down late. She couldn’t do it at Saratoga in August but the favourite may be pushed through faster fractions here. A small wager on her at 6/1 and a forecast to be second to Gamine may be the way to play this race.

Selection: No4 Ce Ce plus a forecast No5 Gamine to beat No4 Ce Ce

Wesley Ward is still searching for his first win The Breeders’ Cup Turf Sprint and has an excellent chance of breaking his duck this year with the explosive Golden Pal. Having won his last four races whilst on home soil, the son of Uncle Mo is the one they all have to beat and his trainer has been very bullish ahead of the race.

There are several dangers from Europe though, with Glass Slippers looking to defend her crown as well as Kevin Ryan’s other contender, Emaraaty Ana, who ran a career best last time out to win the Haydock Sprint Cup.

Another from Europe is A Case Of You for Adrian McGuinness who won the Prix de l'Abbaye at Longchamp last month and could go well at a decent price.

Extravagant Kid won the Al Quoz Sprint at Meydan earlier this year but will have his work cut out from stall 12.

Life Is Good has continued his super form with trainer Todd Pletcher since moving from Bob Baffert. His only loss came by a neck in a Grade 1 won by Breeders’ Cup Sprint favourite Jackie's Warrior. He was five lengths too good for a Grade 2 field at Belmont in his prep for this in late September. He’s the most likely winner in here but Irad Ortiz may have to ride him differently, from just off the pace.

Silver State met a good one when on his game in a Grade 1 in Pennsylvania last time. He’s a talented closer who could get decent early fractions to chase down. At about 4/1, he may be the play at the odds here. He’s not the only runner who may be able to eclipse the favourite. Eight Rings looked great on the lead at Santa Anita last month. Horse for course Ginobili has been freshened up since a win in a local Grade 2.

Love looked like one of the best horses on the planet last year when winning the 1000 Guineas before bolting up in the Oaks and with quick ground a certainty at Del Mar, the Aidan O’Brien-trained mare will take all the beating. Having won at Royal Ascot back in June, the flashy chestnut has disappointed since with defeats in the King George and the Juddmonte. However, against her own sex, she looks to have a very big chance and has a nice draw in six.

James Fanshawe’s Audarya was a surprise winner in this race last year but hasn’t won since and was recently beaten by Rougir in the Prix de l'Opera at Longchamp.

The Japanese mare Loves Only You, who won a Group 1 in Hong Kong back in April, could give Japan their first ever win at the Breeders’ Cup meanwhile the home side look to have a big chance with War Like Goddess. Trained by Bill Mott, the daughter of English Channel has won four of her five career starts and has been trained with this race in mind.

Jackie's Warrior has not looked back since trainer Steve Asmussen cut him back to one turn races. His only loss was by a neck to another crack sprinter in June. Only Life Is Good who runs in The Dirt Mile has given him a race since. He has the speed to lead or sit close to the pace. On paper, he has no obvious weaknesses.

Jackie's Warrior is likely to be around even money. There may be some upside in a few of his rivals. The California based Dr. Schivel is the local favourite. He won a Grade 1 over course and distance and a Grade 2 at Santa Anita with a broken reign. He has to be respected but C Z Rocket has a chance of reversing the form from those races. He’s a late runner who may get more pace to chase down. He’s a seven year who fires every time including running second in this race last year.

Following Sea was too much for last year’s third Firenze Fire at Belmont last month. Special Reserve and Aloha West ran one-two in a swiftly run Grade 2 at Keeneland.

The Breeders’ Cup Mile has been won by the like of Miesque, Goldikova and of course Wise Dan and this year it looks like Space Blues could add his name to the illustrious list of winners. Having won impressively in the Prix Foret at Longchamp last month, Charlie Appleby has confirmed that this will be last race for the multiple Group 1 winner and the Godolphin trainer also confirmed that this is his best hope of a winner at the meeting this year. The master trainer also saddles Master Of The Seas who finished second in the 2000 Guineas but has a bit to find on his stablemate.

Aidan O’Brien, who won the race for the first time last season with Order Of Australia, relies on Mother Earth who was a surprise winner of the 1000 Guineas earlier this season and wasn’t beaten far last time out in the QEII stakes at Ascot.

As for the home team, well the best chance looks likely to be Peter Miller’s Mo Forza who is looking for a fifth successive victory meanwhile Chad Brown, who won the race with Uni a couple of years ago has Blowout, who looked back to her best when winning the First Lady Stakes when last seen.

One other that deserves a mention is the Japanese star, Vin De Garde. Trained by Hideaki Fujiwara, the five-year-old mare finished second in the Dubai Turf back in April and could hit the frame again at a big price.

By this race, there may the prospect of Letruska being the fourth short-priced winner of Breeders’ Cup dirt race on this card. She’s a very progressive mare. The five year old has won back to back Grade 1’s since returning from a midsummer break. Without question she can win this race. Whether odds of about 6/4 quoted at the time of writing reflect her chances is another matter. She faces the deepest field she has ever encountered and is likely to have company on the front end.

This may be a spot to look for a gal who can finish. There are a few in here that fit that bill. Of the older mares, The Chad Brown trained pair of Royal Flag and Dunbar Road are of interest. Slight preference is for the three year olds Malathaat and Clairiere. The last-named is by far the bigger price of the two so gets the nod.

Shedaresthedevil could find herself in a nice spot early, stalking the leaders but getting first run on the closers. 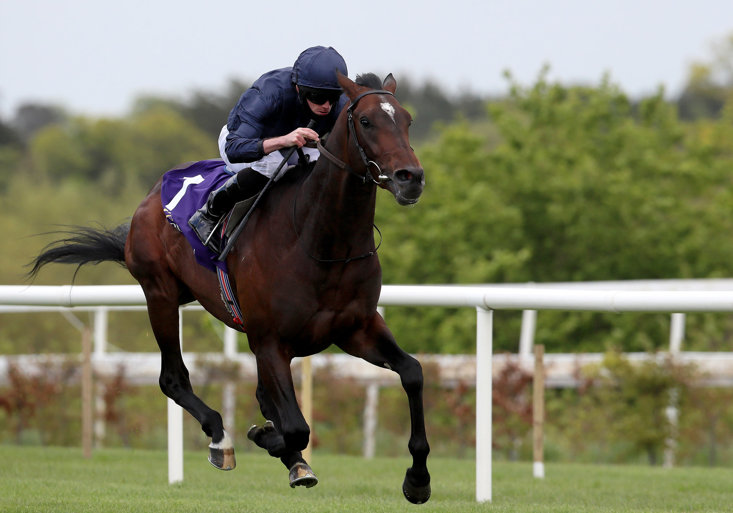 Dermot Weld’s Tarnawa is back to defend her crown and despite her undoubted quality, she has to be taken on at the prices. The five-year-old has been handed a tough draw and is coming into the race on the back of a brutal second in the Qatar Prix de l'Arc de Triomphe. The ground was heavy in Paris last month and there is every chance that the race will have left a big mark.

Aidan O’Brien, who has won the race a record six times has three chances, with Japan, Broome and the one-time Derby favourite Bolshoi Ballet, all set to take their chance. The latter won the Belmont Derby earlier this season and with Ryan Moore set to be on board, there is every chance that he will run a very big race and is the selection.

Godolphin have two contenders with Yibir and Walton Street but both will need career best performances to be competitive, meanwhile Roger Varian’s Teona, who won the Prix Vermeille when last seen will relish the quick conditions and could go close.

The German Derby winner Sisfahan is also in the line-up but once again, will have to produce a career best run to be in the mix.

There will be a big difference of opinion about this race from either side of The Atlantic. Over here, many will be considering turning it in for the night rather than waiting an hour after The Breeders’ Cup Turf. In America, this is THE RACE of the meet if not the year and not to be missed.

Knicks Go is back on track after below par runs in February and June. He’s beaten good but not top-notchers in his last three starts. The Brad Cox trained runner set sprint fractions and still managed to win The Breeders’ Cup Dirt Mile last year. The question with him is this ten furlong distance. That is especially true if any of his rivals try to push him hard early on. His trainer seemingly has all bases covered is he has the best closer in Belmont and Travers Stakes winner Essential Quality. If Knicks Go is softened up, he is the logical horse to run these down.

Medina Spirit, Hot Rod Charlie and Essential Quality are closely matched from The Kentucky Derby. Medina Spirit may be best when he can be the boss from the outset. Hot Rod Charlie has ran big since including being first past the post in back to back Grade 1’s. He didn’t stay the mile and a half as well as the winner Essential Quality in The Belmont Stakes. At about 5/1, he gets a tepid vote.