Football
News
The Brentford fans roared their side to a 2-0 win over Arsenal on the opening night
Simon Lillicrap
21:58, 13 Aug 2021

The crackling atmosphere that fizzed around Brentford’s new stadium was reciprocated by a stunning performance from their side on the pitch as they dispatched Arsenal 2-0 thanks to goals from Sergi Canos and Christian Norgaard. This was the perfect start to the new season as their fans relished being in the Premier League for the very first time. England’s biggest division is a richer place now the Bees have arrived.

Peter Gilham, Brentford’s stadium announcer for 51 years, was able to christen the new stadium with a rousing introduction to both teams as fans returned to Premier League football for the first time in over a year. This was a new era for Brentford, their first top flight game in 74 years, as the 50th club to play in the Premier League opened the curtain on the 30th Premier League season.

If this was the opening stanza of this season’s Premier League play, Brentford took centre stage as the hero and Arsenal were perfectly cast as the unfortunate villain. New stadiums can often feel stagnant and lack the heritage of their predecessors but having put up with an entire season of football with no spectators, this felt like a completely different entity.

No more fake crowd noises, no more cardboard cutouts. This time they were living, breathing, impassioned Brentford fans, delighted at what their side were producing on their biggest stage. Even VAR was barely noticeable, exactly how we like it.

33 goal man Ivan Toney had a relatively quiet night in front of goal on his return to top flight football, but he was still an important part of the Brentford collective that won this match. Although Arsenal dominated possession in the early stages, Bryan Mbuemo had the best chance of the game early on as he saw his effort come back off the upright after an excellent flick from strike partner Toney.

Then the breakthrough did arrive for the hosts after they showed the Premier League their attacking corner routine, which involves all ten outfield players in and around the opposition’s penalty box. The ball came out to Sergi Canos, who jinked into the box and fired the ball through the legs of Calum Chambers and past Bernd Leno at the near post. 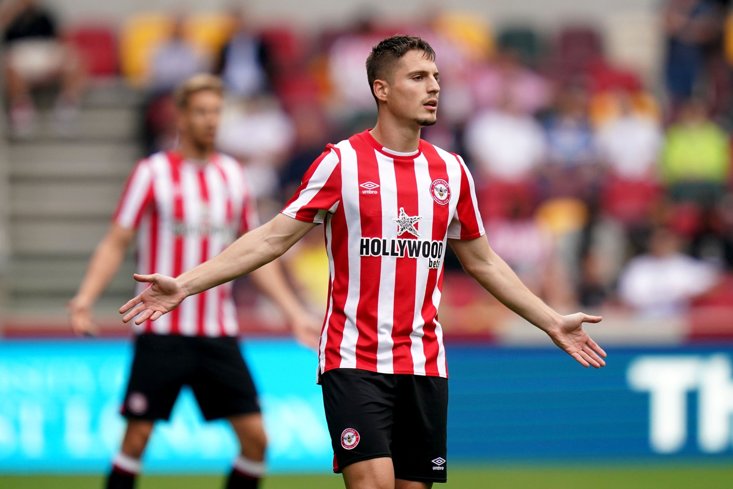 That goal sparked wild scenes in the stands. Scenes we haven’t seen in so long and that make up such a big part of our game. Without fans, English football has felt sterile. Now, the lifeblood of our game has returned.

In the second half, the Brentford fans came to the fore again as Arsenal’s Bukayo Saka was introduced from the bench. Having missed the decisive penalty in England’s Euro 2020 shootout, the teenager was racially abused online, and the response of these Bees fans, following in the footsteps of Spurs last week, was touching.

Arsenal did press after that substitution as Granit Xhaka blazed over on the half volley, but it was Thomas Frank’s side who doubled their lead. They may have a new £50m defender in Ben White, but Arsenal’s soft underbelly was exposed once again as a long throw wasn’t dealt with, and Norgaard was there to nod home.

Mikel Arteta’s side, without the ‘ill’ Pierre-Emerick Aubameyang and Alexandre Lacazette lacked any form of leadership and looked like a side well beaten on the night. But this is isn’t about Arsenal’s negativity.

This was Brentford’s night. This was always going to be Brentford’s night as they announced themselves to the Premier League in style. But more importantly, this was the fans’ night. From now on, they’ll never be taken for granted again.