Brentford will deservedly get another crack at reaching the Premier League in next week’s Championship play-off final after finally seeing off Bournemouth 3-1 on Saturday in a rip-roaring semi-final second leg at the Brentford Community Stadium.

Trailing 1-0 from the first leg, Thomas Frank’s Bees conceded first in the home leg but then responded brilliantly against a Bournemouth side who appeared hell-bent on breaking the game up by any means necessary.

The Cherries’ failure to reach the final means there will be no immediate return for a third relegated side from last year’s Premier League following the promotion of Norwich City and Watford, which was a scenario feared by many Championship fans hoping to see a greater flow of clubs between the top two divisions.

Had Bournemouth gone up it would have been the first time all three clubs had gone straight back up, and on the back of the European Super League proposals would have prompted more questions about the quasi-closed shop nature of the Premier League in its current format. But Marcus Forss capped a great Brentford comeback to set up a second successive visit to Wembley for the promotion final after last year’s loss to Fulham.

While Brentford had done what they could to whip up a great atmosphere beforehand, it took less than six minutes for their defence to put a pin in proceedings by leaving Arnaut Danjuma with a clear 80-yard run to goal from a Bees corner to slide the ball home with ease and double Bournemouth’s aggregate lead.

The home side soon pegged one back when Ivan Toney slotted home from the spot after a controversial award by referee Jarred Gillett when Emiliano Marcondes‘ cross was inadvertently deflected away by Lloyd Kelly‘s outstretched hand as he slid in to challenge. 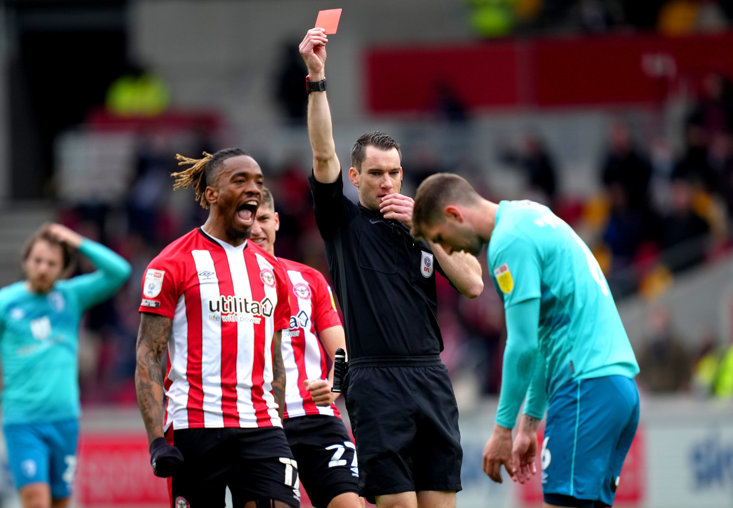 Chris Mepham’s red card for pulling down Bryan Mbeumo as the last man after a heavy touch further tilted the balance back in Brentford’s favour, and shortly after half-time they were level on aggregate when Vitaly Janelt tried to get what he could on the ball in a three-man challenge and somehow steered the ball beyond Asmir Begovic.

And the turnaround was complete with nine minutes to go when Forss threw himself at Marcondes’ left-wing cross to beat his marker to the ball and steer past Begovic. Down to 10 and suddenly needing to change their previously bitty, defensive-heavy approach, Bournemouth never looked particularly likely to change the narrative as 4,000 returning home fans roared their side to victory in what for many will have been their first visit to the club’s new stadium.

For the Cherries there are now some decisions to be made in the summer regarding the future of interim manager Jonathan Woodgate and many of their players, but for Brentford there is one more chance at the top flight following late heartbreak last term. They have thoroughly deserved another shot, and their ability to keep the likes of Toney, Marcondes and Forss might depend on what happens at Wembley next Saturday.