Football
News
The Spaniard has taken no time to find his feet in the Premier League since joining from La Liga side Getafe
Conor Keane
18:55, 15 Oct 2021

Brighton & Hove Albion have enjoyed a brilliant start to the season in the Premier League, having recorded their best start in the division since their arrival in 2017. Graham Potter has worked wonders in Sussex so far and his Seagulls are flying high. There have been many top performers in blue and white this season, but the club’s catalyst has been their summer signing Marc Cucurella.

The Spaniard took no time to find his feet in the English top flight after joining from La Liga side Getafe after having his £15 million release clause triggered. He penned a five-year contract on the south coast and the supporters will be glad that he’s tied down for the future.

As Brighton have got off the mark quicker than in previous campaigns, Cucurella has played a key role in the demanding wing-back role. He has not shied away from getting stuck into the defensive and offensive work and has already realised how much work is needed in the Premier League, admitting that he was “exhausted” after playing 90 minutes for the first time in a while against Leicester City. His lethargy reflects the amount of work he is putting in on the grass as he looks to help the club keep pushing in the top half of the table.

Cucurella is very comfortable on the ball and his ability to drive the ball forward from defence has made him the spark in Potter’s side. He was the best player on the pitch in the 0-0 stalemate with Arsenal in the last game before the international break, scooping up the Man of the Match award in the process. At any point Brighton went on the attack, it all went through him and his capacity to carry the ball at speed was proving to be a constant problem for Mikel Arteta’s side.

In his four appearances in the Premier League so far, the 23-year-old has not tasted defeat (two wins and two draws). He has implemented his attacking qualities as a wing-back as he has produced 17 crosses into the box for his teammates as he looks to grow into an even greater attacking threat down the left wing. 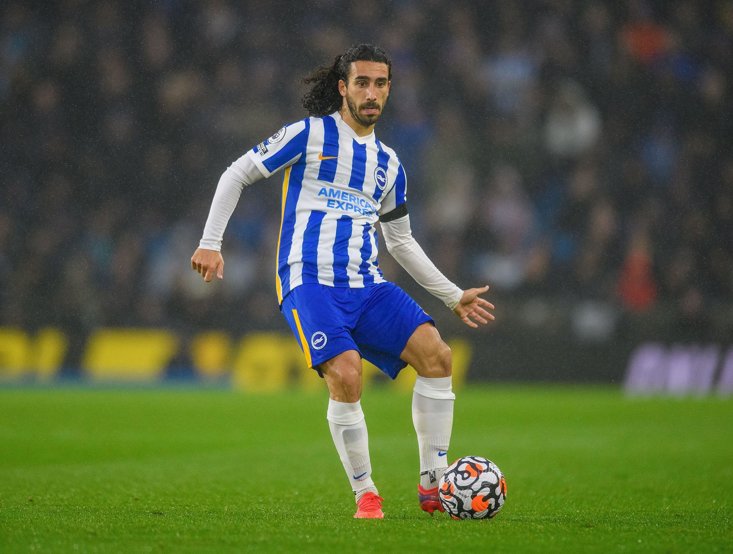 Cucurella has shown how he operates to jolt his side into life on the break, having made six accurate long balls as well as delivering three through balls to his attacking teammates. He has also shown his qualities in defence, so far winning 14 tackles, giving him a 57% success rate. The wing-back has also made two interceptions, completed eight clearances, and made 24 recoveries. His manager will be delighted with how well he has started his career at the Amex, and he will know how he can further develop his game to have a greater influence on the attack and defence.

He is a very exciting young talent, and you would expect he is only going to improve with more minutes on the pitch. With a bright start to his Brighton career, he is looking to be one of the signings of the summer, alongside Everton duo Demarai Gray and Andros Townsend.

The next test for the Seagulls is struggling Norwich City at Carrow Road. With the Canaries having only a single point to their name so far this term, Brighton head into the game as favourites and Cucurella will be looking to heap more misery on the side rooted to the bottom of the table.

Betfred are offering 23/20 on Brighton to beat Norwich on Saturday.