At what point do we take Brighton & Hove Albion seriously? When do Graham Potter’s men go from a novelty guest in the European places to a side recognised for earning their standing on merit? The Seagulls currently sit fifth in the table, above Manchester City albeit having played a game more. But after comprehensively outplaying Arsenal, and deserving to win in a game they dominated, surely Albion cannot wait much longer for acknowledgement?

Seven games is a small sample size, and they are yet to play any of last season’s top four sides. But tonight was an acid test against an improving Arsenal who had won last weekend’s North London Derby. Coupled with their excellent win over Leicester City, this draw helps build a case for Brighton as a genuine top-half prospect this season.

Arsenal started on the front foot, with Pierre-Emerick Aubameyang threatening down the left flank early on. The Gunners saw a lot of the ball, but did not play at a high enough tempo to really trouble Graham Potter’s side. Bukayo Saka did fashion a good chance when he was played in down the line by Takehiro Tomiyasu. The England star crossed for Aubameyang, whose header struck the post before being cleared off the line.

This was the highlight of the first period for Mikel Arteta, as he saw his team overrun for the rest of the half. Brighton had already gone close, when Shane Duffy collected a spillage from Aaron Ramsdale, leading to Lewis Dunk firing over with the goal gaping. They spent the rest of the first half piling on the pressure.

Neal Maupay scooped a pass over to Jakub Moder, who saw a dangerous centre cleared over the crossbar, narrowly avoiding the Arsenal net. Adam Lallana made a number of clever passes forward, and also had the Arsenal defence scrambling when Tomiyasu was caught in possession. Maupay headed wide late in the half as Brighton created chance after chance, with an overhit Thomas Partey shot at the other end providing the only Arsenal respite. 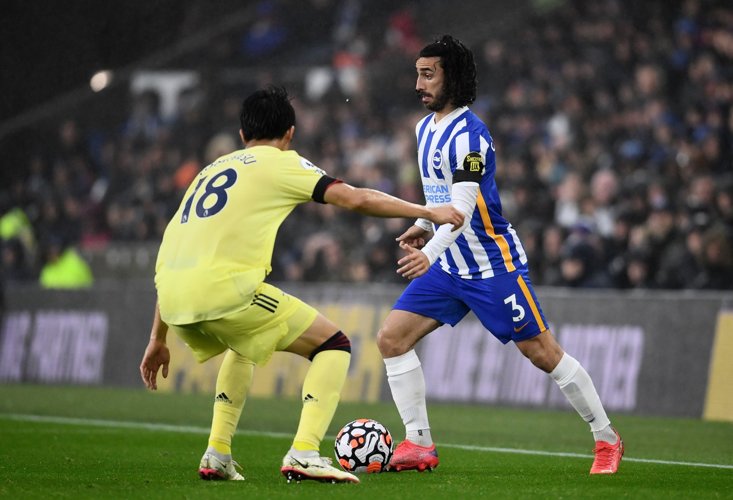 The second half began well for Arteta’s side, and the first ten minutes of the period probably brought Arsenal’s best work of the game. Aubameyang went clean through, only to be brought down by Duffy. Before the roars of injustice had floated away into the night air, the flag went up to indicate the Gabon international was offside. Just when it appeared that they had taken the sting out of Brighton though, Potter’s side retook the initiative.

Moder put shots wide and over, and you began to wonder if The Seagulls would be left to lament poor finishing, as they continued to create chances they could not take. Arteta shuffled his pack, bringing Nicolas Pepe on for the quiet Martin Odegaard, and later replacing his captain, Aubameyang, with Alexandre Lacazette. These attacking changes did little, and the best player on the pitch going forward was indisputably Marc Cucurella. A constant threat from wide on the left, he beat Tomiyasu time and again to get dangerous balls into the box. The fact his teammates could not finish them does not detract from a breakout display from the Spaniard.

All Brighton’s classy play was almost for naught when Emile Smith-Rowe did excellently well to break through and test Robert Sanchez, who saved brilliantly. At the other end, Cucurella gave Ramsdale an unwanted opportunity to top Sanchez’s stop, which he did when palming away a cross-shot hybrid that was swerving trickily towards him. Leandro Trossard and Solly March would test Ramsdale further, but in a limp Arsenal display he proved to be the player who can emerge with the most credit.

For The Gunners, they will view this as an opportunity squandered, a frustrating failure to build on the Tottenham Hotspur win. Brighton on the other hand, may also feel a little uneasy. While a point against Arsenal is not to be sniffed at, they currently sit four places above them in the table and perhaps deserved to win on balance. They enjoyed 20 shots to Arsenal’s eight, while also claiming the lion’s share of possession. On a day where everything went their way, the only thing that deserted them was their finishing. If Graham Potter can sharpen Brighton’s finishing touch, perhaps his team’s lofty position will go from early-season novelty to end of season achievement.