Football
News
It was far from a classic but the draw may well help the Seagulls come May
Elliott Bretland
22:18, 12 Apr 2021

Brighton’s Blue Monday curse continued at home to Everton as their failure to win in the Premier League on this day extended to ten games.

The Seagulls have never claimed a victory on the first day of the week in recent top-flight history, losing three and now drawing seven, but the point they earned against the Toffees after playing out a goalless stalemate could prove crucial in their battle against relegation as they edged further from the drop. For Carlo Ancelotti’s men, a share of the spoils was probably the most they deserved though it was a further setback in their meek pursuit of a top four place.

In the opening 45 minutes, Lucas Digne’s throw-in for the visitors failed to come into play and it was a short passage which perhaps best summed up a turgid first half. Brighton passed it around nicely without really probing a great deal while Everton looked disjointed. Barring a sumptuous turn and perfectly weighted through ball by James Rodriguez, they failed to impress during a forgettable tussle.

To be fair to Everton, they took to the field with a patched up side a million miles from their strongest starting XI. Of course, every club is suffering with fitness problems and injury worries during this strange campaign but in the 24 hours leading up to this clash, top scorer Dominic Calvert-Lewin was ruled out with an abductor issue while Jean-Philippe Gbamin, who only returned last week after 19 months on the sidelines, picked up a fresh knee problem

Everton have been decimated recently and it was clear to see on Monday evening as they had to delve deep into their youth side to fill the bench. When centre-back Yerry Mina went down and had to go off in the second half, Blues will have shook their head with bewilderment. 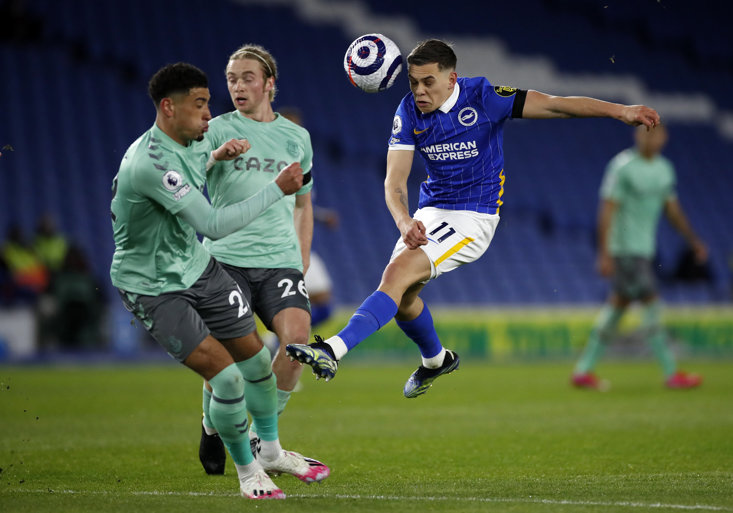 Brighton though, failed to take advantage despite showing plenty of craft and endeavour. Jakub Moder looked lively for the hosts and took a few punts at goal from range but didn’t really test Robin Olsen in the Everton net. James also tried to bend a free-kick home from distance for the travelling Toffees early on but it sailed high over the bar.

On 75 minutes, centre-back Ben Godfrey blocked brilliantly to deny Danny Welbeck before Yves Bissouma worked the ball into the area and found Neal Maupay who opened his body but toe-poked his effort wide. Gylfi Sigurdsson also had an effort stopped before Davies failed to hit the rebound on target.

In the final minute, space opened up for Iwobi on the edge of the area but the Everton midfielder's shot was wayward and the game ended all square.

For the Seagulls, it was a match which summed up much of their season. They played well, they were entertaining in parts and were diligent in possession but they didn’t get the three points. However, they did take one point and moved seven clear of the drop zone. The draw will have frustrated them but could prove huge come May.

It was more dropped points for Everton, too, who have lingered around the top four for months but have continually failed to take the leap when the opportunity has arose. Failure to win on the South Coast means they have probably now lost too much ground on West Ham, Chelsea and Liverpool though a spot in the Europa League could still be possible having closed the gap on Tottenham with a game in hand.

It’s a stalemate neither side will be happy with but a gain that will have proved very useful when the 38 games are played and the season is done and dusted.