Rugby
News
The Lions take on Japan this weekend as their head coach targets a trio of tour triumphs
Gary Maiden
15:01, 25 Jun 2021

Warren Gatland will take his British and Irish Lions squad to South Africa this summer for his third tour as head coach, although this one will have a unique feel to it.

The Springboks were only confirmed as the Lions’ opponents as recently as March, with the global pandemic reaping havoc on the sporting calendar. In these Covid-19 times, the tour will be completely different for the players and fans alike, with those wanting to watch their heroes in the flesh unable to do so this time around.

Let’s focus on the players first. Rugby union is one of the few remaining sports with a reputation for its stars enjoying the nightlife of places that their travels take them on. Not this year. For a tour lasting six weeks, Gatland and his team are going to have to find ways to prevent the 37-man squad from suffering with cabin fever.

37 boisterous men staying inside the same bubble for pushing two months is a recipe for disaster, and is just another factor that the coaching team are going to have to contend with.

Then there are the supporters. Lions fans travel in their thousands to take in the spectacle of a tour that visits all corners of the globe. Many see the tour as their own opportunity to experience a holiday like no other, with them having to wait another four years for the next chance to follow their union stars.

Unfortunately for those that would be looking to make the trip, the current rules state that the Cape Town opener will be played behind closed doors, and it is looking increasingly likely that the remaining two in Johannesburg will follow suit.

While that may be an advantage for the British and Irish troops who now don’t have to worry about playing in front of a menacing South African crowd, both sides are going to have to get used to performing without the added motivation of spectators roaring them on.

Gatland, who defeated Australia on his tour debut eight years ago before guiding his side to an unlikely series draw in his native New Zealand four years later, has had to contend with an awful lot in his coaching career, but this may just top the lot.

He’s already one of the most successful coaches that the Lions have had, but avoiding defeat against the reigning world champions would elevate him to iconic status. That is the view of former Lions captain Sam Warburton, who played under the New Zealander in both of his previous tours as head coach. 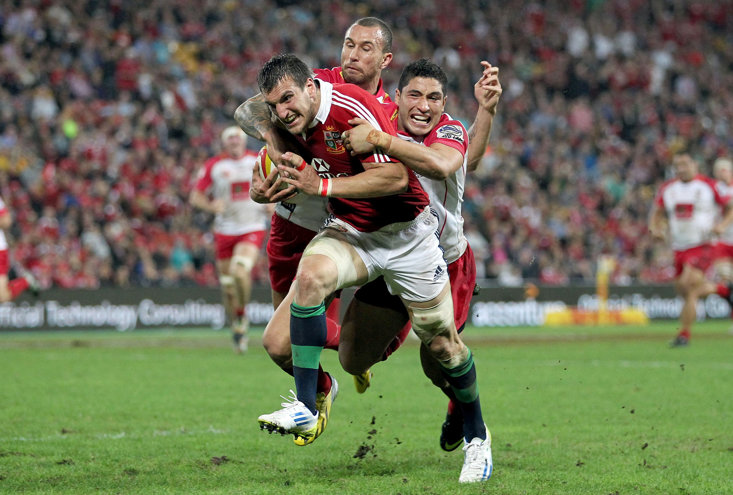 Warburton captain the Lions under the current boss

"Even now he is probably the most successful Lions head coach with two undefeated tours," Warburton claimed.

"To do three would see him cement himself as an icon of Lions rugby.

"He is already a Lions great but to have three unbeaten Test tours under his belt would be tough to beat and a record that would probably stand for a long time.”

In avoiding a series defeat in South Africa, this generation of British and Irish Lions would become the first to do so in three successive attempts – a feat that hasn’t been managed since 1899.

Before heading out to Johannesburg to take on the Emirates Lions on 3rd July, there is the small matter of a match against a Japan outfit who miraculously topped their 2019 World Cup group containing Ireland, Scotland and Samoa.

Once in South Africa, warmup games against the likes of Cell C Sharks, Vodacom Bulls and DHL Stormers should acclimatise captain Alun Wyn Jones and his men to the style and conditions, before the first of three tests against the world champions kicks off on July 24th in Cape Town.

Perhaps surprisingly, Betfred have the Lions as 8/11 favourites to win the series, with the hosts priced at 6/5. After the 2017 series with the All Blacks finished as a tie for the first time since 1955, the same outcome can be backed at an interesting 22/1.

There will be an awful lot of enforced changes surrounding the entire tour, but after the Springboks battered and bruised England in a 32-12 World Cup final victory, expect one thing to stay the same…

It will be brutal.

x
Suggested Searches:
Manchester United
Liverpool
Manchester City
Marcus Rashford
Premier League
More
rugby
Morne Steyn Breaks British and Irish Lions' Hearts Again With...
Morne Steyn has broken the British and Irish Lions hearts once again with a last-gasp penalty that secured [ ... ]
rugby
British & Irish Lions' Time Concerns Are A Problem Across The...
Sport as a whole is struggling to come to terms with the concept of time right now. As The Hundred reshapes [ ... ]
rugby
Pollard Kicks Five Penalties As South Africa Level Lions Series
It was scrappy and bad tempered at times. It was difficult to watch, even. But two second-half tries [ ... ]
rugby
Rassie Erasmus Needs To Be Sanctioned Heavily, However Justified...
It took 62 minutes for Rassie Erasmus to rip apart the refereeing performance in the British Lions’ [ ... ]
rugby
Warren Gatland Inspires British And Irish Lions Comeback Win...
The British and Irish Lions’ incredible second-half renaissance stumped world champions South [ ... ]
rugby
England Emerge Victorious At Twickenham Despite Spirited Display...
England were pushed further than they probably would have expected when they took on the USA in [ ... ]
rugby
Alun Wyn Jones To Captain British & Irish Lions On South Africa...
Wales legend Alun Wyn Jones will captain the British and Irish Lions squad ahead of their tour in South [ ... ]
rugby
England Dig Deep Against France To Claim Fourth Six Nations...
It wasn’t pretty but England got the job done, beating France 10-6 in a gripping low-scoring classic [ ... ]
rugby
Eddie Jones' 2021 Failures Could Set England Up For World Cup...
After a review by the RFU into England’s woeful Six Nations performance, Eddie Jones has kept [ ... ]
rugby
Wales Win Six Nations Championship After Scotland's Late, Late...
Wales have regained the Six Nations Championship they last won in 2019 after France went down to a dramatic [ ... ]
rugby
Can History Repeat Itself? When Wales And France Shared The...
Wales are still favourites to win the Six Nations championship despite missing out on the Grand Slam [ ... ]
rugby
What Do Wales Need Scotland To Do Against France To Win The...
This is an unprecedented Six Nations campaign. For the first time we have an extra game being played [ ... ]
rugby
Six Nations: Last-Gasp France Try Cruelly Denies Wales Grand...
It promised to be a ‘Super Saturday’ unlike any other and it’s safe to say it delivered [ ... ]
rugby
England's Final Six Nations Game Against Ireland Is More Than...
You’d be forgiven for thinking England’s final Six Nations game against Ireland was a dead [ ... ]
rugby
Late Maro Itoje Try Gives England A Much-Needed Win Over France
England got back to winning ways in the Six Nations Championship by the finest of margins on Saturday [ ... ]
rugby
The Stats Don't Lie, Ill-Discipline Has Cost England The Six...
We’ve all seen the headlines. Too many mistakes and too many penalties have cost England in a [ ... ]
rugby
Alun Wyn Jones' Has Shown In The Six Nations Why He's A Lions...
146 caps, fifteen years of service and one cheeky smile, Alun Wyn Jones has been the beating heart of [ ... ]
rugby
Poor Officiating Puts Dampener On Wales Win Over England That...
Wales have kept their hopes of a Grand Slam alive, secured a bonus point and won the Triple Crown, with [ ... ]
rugby
England Need To Be Cool, Calm And Composed Against Wales In...
Eddie Jones is imploring his England side to be on the alert for any scheming from Wales captain Alun [ ... ]
rugby
France v Scotland Six Nations Game Called Off After Latest Positive...
France’s upcoming Six Nations match against Scotland, due to take place this Sunday, has been [ ... ]
rugby
Jack Nowell Aiming For England Recall When He Returns From Injury
England and Exeter winger Jack Nowell looks set to return to action in March after being sidelined for [ ... ]
rugby
Can Eddie Jones Really Blame A Lack Of Fans For England's Six...
England’s start to the Six Nations has been underwhelming to say the least. An opening day defeat [ ... ]
rugby
It Wasn’t Pretty But England Get Back On Track In The Six Nations...
It wasn’t pretty and wasn’t as easy as past England triumphs over Italy but Eddie Jones’ [ ... ]
rugby
How The Six Nations Has Become A Pivotal Moment In Eddie Jones'...
England’s shock defeat to Scotland last weekend certainly threw up more questions than answers [ ... ]
rugby
Six Nations Blown Wide Open With Scotland's First Win At Twickenham...
This year is different. How many times have we heard that over the last twelve months? The global pandemic [ ... ]
rugby
Eddie Jones' Mind Games Can Only Help To Fuel Scotland's Fire...
Eddie Jones has been at the mind games, but it feels like he needn’t really bother. Scotland arrive [ ... ]
rugby
Betfred Super League To Return Without Scrums Due To Covid-19...
The Betfred Super League season will begin without scrums following confirmation from the RFL board [ ... ]
rugby
Three Reasons Why England Winning The Six Nations Isn't A Foregone...
England go into the 2021 Six Nations in imperious form. The defending champions have finished outside [ ... ]
rugby
England’s Beno Obano And Maro Itoje Tackle Race In Rugby In...
Rugby Union has a race issue. It’s uncomfortable to talk about or even acknowledge but it’s [ ... ]
rugby
Hard Men Of Rugby, The Book That Revels In The Legendary Tough...
The famous maxim goes that 'football is a game for gentlemen played by hooligans, and rugby union [ ... ]