In the sleepy villages of Northamptonshire lies one of the world’s most iconic racetracks. Steeped in heritage from apex to barrier, the hallowed asphalt has been a mainstay of the Formula One calendar, whether in rotation or annually, since 1948.

The former RAF base has been a successful stomping ground for Lewis Hamilton, winning seven of the last eight races at the venue, with only Sebastian Vettel in 2018 taking the trophy out of his hands thanks to a spin on the first lap by Kimi Raikkonen.

Last year saw Hamilton win despite being handed a 10-second drive-through penalty that was served in the pits after he collided with Max Verstappen through Copse corner and sent the Dutchman flying into the barriers, widely regarded as the first chapter in what was the most chaotic title race of the modern F1 era.

This season it’s looking like Max Verstappen will be amongst the top candidates again without any similar kind of incident happening again, with Sergio Perez and Charles Leclerc not far behind. However we’re anticipating Mercedes to finally raise their game for the home race of their drivers.

Toto Wolff isn’t a man that lacks ambition. His team have dominated the sport for the best part of eight years and have shared the crown with Red Bull for the past 11 years. Mercedes’ problems, no matter how bad they seem, won’t last too long and with a car that claimed third and fourth in Canada just a week ago, the momentum gained with so many points as well as George Russell’s great form this season anchoring their spot in the top three of the constructor’s championship. 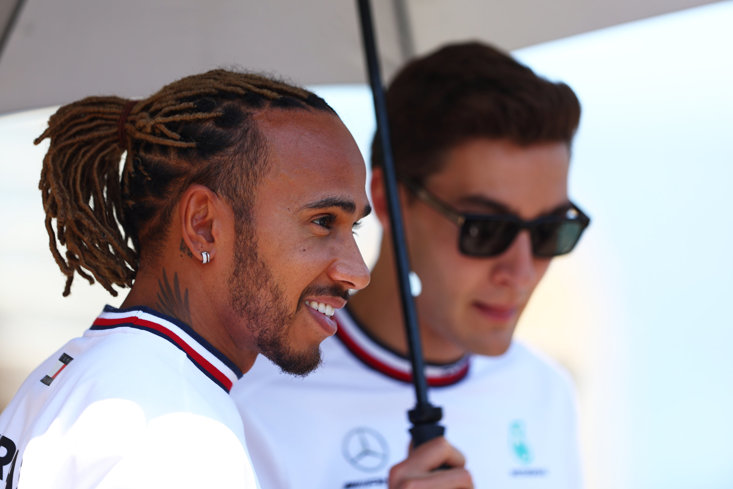 The team has also confirmed that they will be bringing an upgrade package to the British GP with them, with Technical Director Mike Elliott saying: “We will be bringing new bits to Silverstone, we will be trying to push the car forward, trying to get some pace from the car we've got or from the package we've got as well as the new bits we are going to add to it.”

In terms of the chasing pack, expect Aston Martin to qualify well, with Vettel knowing this track so well thanks to his years of experience alongside Silverstone being the test track for the team.

Alpine continue to perform well and Fernando Alonso is having a superb season, qualifying in second back in Canada, and could benefit from further development of the A521, with the reigning Hungarian GP winner Esteban Ocon sharing that the Alpine should return to form at Silverstone.

"We have quite a bit of upgrades normally coming so there should be a good step for us,” said Ocon when speaking to Motorsport.com.

“So yeah, big hopes, it's going to be a big week, starting from Tuesday for us [in the simulator], so a lot of work going ahead. And yeah, hopefully we can perform well, because the car is where it should be."

In terms of the favourites, Max Verstappen will want to claim his first British title after the incident last season and his Red Bull is showing no signs of slowing.

Carlos Sainz had multiple laps of DRS to catch the Red Bull but still failed to get closer than three tenths to the Dutchman, and although Charles Leclerc has already got the better of him this season on occasions, his car is yet to prove it’s reliable enough to sustain a challenge at the top of the driver’s championship. Sergio Perez has been impressive for Red Bull as well, so expect him to get a top five finish if he stays on track.

The giant orange elephant in the room remains McLaren. They are yet to really find any success this season much to the chagrin of poster boy Lando Norris, who didn’t hide his anguish in Montreal when he double stacked a pit stop behind his teammate Ricciardo, only for his team to have forgotten his tyres. Despite a painful season so far, McLaren have the fourth place in the constructor’s championship, however Alfa Romeo and Alpine are breathing down their neck with every points finish their drivers collect.

Lights out is at 3pm BST live from Silverstone, expect fireworks on the track as the British Grand Prix usually delivers exciting close-quarters driving.