WWE will host their first UK stadium show in 30 years this summer, with the American sports entertainment giants taking over the Principality Stadium in Cardiff. Saturday 3rd September has swiftly found its way into the diary of every wrestling fan in the UK, such is the anticipation for this colossal show. Should WWE fill the 74,500-seater facility, it will be their third-biggest attendance of the year after the two nights of WrestleMania earlier this month.

WWE last graced a stadium on these shores in 1992, when the then-WWF hosted SummerSlam at the old Wembley Stadium. A classic event in the history of the promotion, that show was headlined by the British Bulldog’s Intercontinental Championship victory over Bret ‘The Hitman’ Hart. Domestic fans have hungered for a spectacle on that scale ever since, and finally their prayers have been answered.

The company usually tours the nation’s arenas twice a year, staging Raw and SmackDown television tapings in major cities along the way. But the implication here is that the Cardiff show will be a pay-per-view, or “Premium Live Event” as WWE has recently rebranded their biggest shows. While the late-90s and early-2000s saw the wrestling conglomerate stage UK-exclusive PPVs on these shores for broadcast on Sky Box Office, this will be just the second mainstream big event to take place anywhere in Europe.

While no names have yet been announced, you can expect WWE to stack the card high with top talent to try and sell-out the Principality Stadium. Superstars such as Undisputed WWE Universal Champion Roman Reigns, Scottish main-eventer Drew McIntyre, recent signee Cody Rhodes and UFC pioneer Ronda Rousey are all likely to appear. WWE may even push the boat out further, with the likes of Brock Lesnar a possible inclusion to help draw eyeballs to the stadium extravaganza.

WWE
@WWE
BREAKING: For the first time in 30 years, WWE will bring a major stadium event to the United Kingdom at @principalitysta in Cardiff, Wales this September!
Details 🔎
Exclusive pre-sale registration 🎟 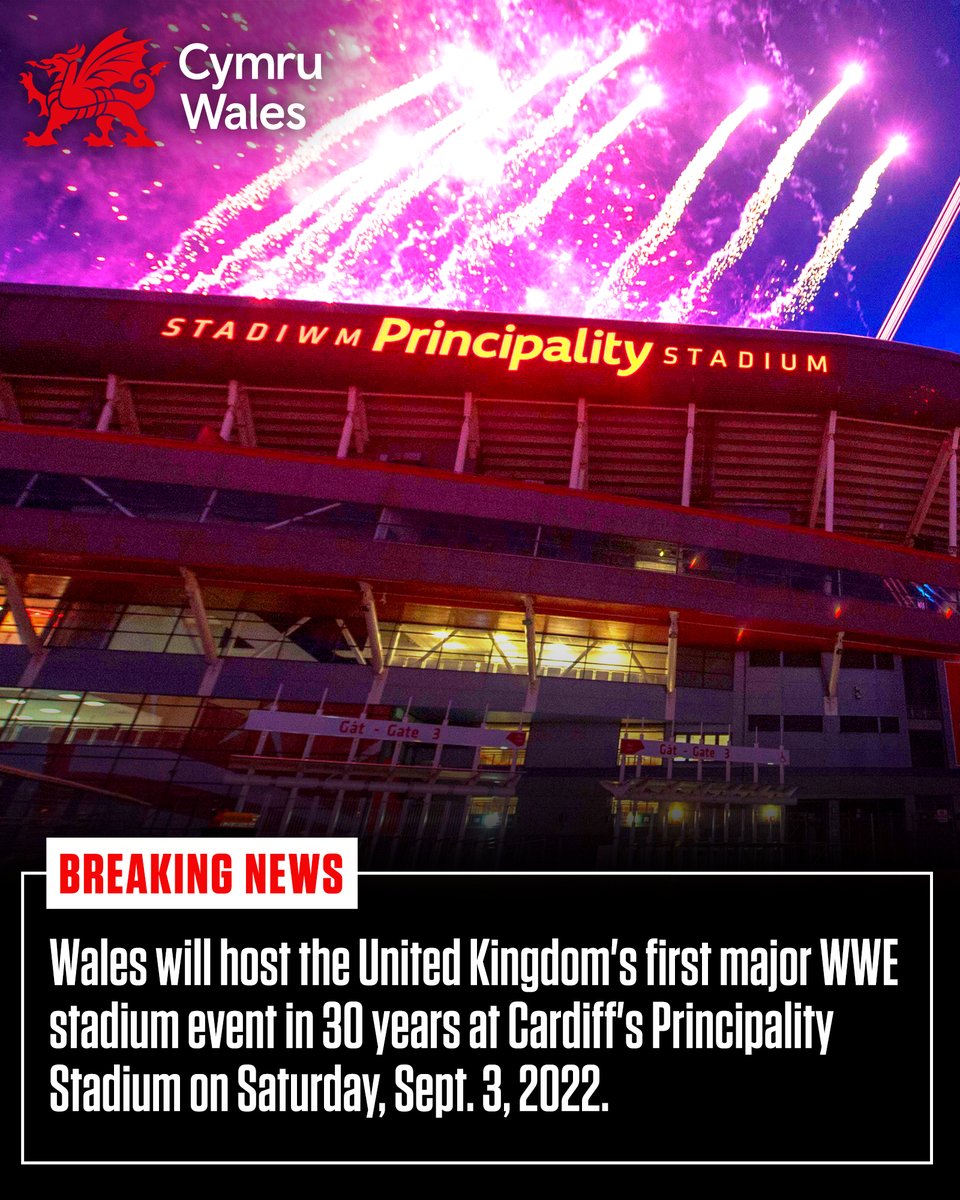 The show will provide an exhilarating platform for WWE’s British contingent, which thanks to the introduction of NXT:UK in 2018 is stronger than ever. Alongside former WWE Champion McIntyre, the likes of SmackDown’s Butch, the Moustache Mountain combination of Tyler Bate and Trent Seven and Heritage Cup holder Noam Dar could all be targeting the September super-show. In 1992, British Bulldog was the sole UK representative at Wembley. This time, a whole host of superstars could follow in his wake, as British wrestling has never been more prominent.

Tickets are not yet on sale for this blockbuster event, but fans can register interest ahead of the pre-sale here. As WWE prepares to host its biggest UK show in 30 years, it will be fascinating to see the card come together over the coming weeks and months. If the event is anything like the iconic SummerSlam 1992, British wrestling fans are in for an incredible treat.

x
Suggested Searches:
The Sportsman
Manchester United
Liverpool
Manchester City
Premier League
More
us-sports
Colin Kaepernick, The NFL Star Rather Than Activist, Might Be...
Google Colin Kaepernick. There he is, the ‘American activist’. Check out Wikipedia. Oh yes, [ ... ]
us-sports
On This Day 20 Years Ago, The British Bulldog Davey Boy Smith...
On 18th May 2002, ‘British Bulldog’ Davey Boy Smith passed away from a heart attack at the [ ... ]
us-sports
NBA Playoffs Resume After Chaotic Exits For Champion Bucks And...
It’s been a tremendous few days in the NBA and this week’s conference finals, which start [ ... ]
us-sports
Ric Flair Returns At 73: The Nature Boy Will Walk That Aisle...
“To be the man, you gotta beat the man!” ‘Nature Boy’ Ric Flair has uttered [ ... ]
us-sports
There Are Storylines Everywhere You Look In The NFL's Week 1...
Something the NFL seem to be willing to do is make their sport a spectacle through their own power. [ ... ]
us-sports
Chuck Daly: 'Daddy Rich' Tamed Rodman, Bagged Isiah His Rings...
Entering a debate on the greatest sports sides in history should inevitably reach a particular conclusion. Avoiding [ ... ]
us-sports
'We Want RK-Bro! We Want The Usos!': No One Is Safe From Sasha...
When WWE Women’s Tag Team champions Sasha Banks and Naomi first joined WWE, the landscape was [ ... ]
us-sports
Everything You Need To Know About WWE WrestleMania Backlash
The wait ends this weekend, as WWE returns with their first Premium Live Event since WrestleMania. This [ ... ]
us-sports
The Crazy Times Of Kareem Abdul-Jabbar, The NBA All-Star Who...
This article first appeared in The Sportsman on 05/05/20 Being the number one draft pick in the NBA [ ... ]
us-sports
Blood Brothers: Randy Orton And Riddle Talk Chemistry, Growing...
The old adage dictates that opposites attract, and on the face of it that certainly seems true of RK-Bro. [ ... ]
us-sports
The NFL’s Best Trades and Free Agency Signings So Far
It’s the same every year. Almost as soon as the Vince Lombardi Trophy is awarded, attention turns [ ... ]
us-sports
Impact Wrestling's D'Lo Brown: We Didn't Open The Forbidden...
It is such an overused phrase that it has become cliched, but Impact Wrestling’s D’Lo Brown [ ... ]
us-sports
How ‘The Last Dance’ Brought Michael Jordan's Chicago Bulls...
It's now been 26 years since the Chicago Bulls ended the NBA season with a record of 72 wins and [ ... ]
us-sports
On This Day In 2018: WWE Icon Bruno Sammartino Passes Away
There have been 30 WWE Championship reigns in the last 2,803 days. In the 2,803 days between 17th May [ ... ]
us-sports
Why Jackie Robinson Day Means As Much Today As It Ever Has
Across Major League Baseball on Friday, number 42 will pitch to number 42. Number 42 will field the [ ... ]
us-sports
Frank Vogel Out: Who’s Next In The Hot Seat For The LA Lakers?
Head Coach Frank Vogel has paid the price for the Los Angeles Lakers’ poor campaign, as they failed [ ... ]
us-sports
Giannis, Embiid Or Jokic: The Wide Open Race To NBA Most Valuable...
The race to become the NBA’s regular season MVP has never been tighter. Giannis Antetoukoumpo [ ... ]
us-sports
One Champ To Rule Them All: Lesnar Takes On Reigns On WrestleMania...
We are halfway through WrestleMania weekend, and now that you’ve finally processed what happened [ ... ]
us-sports
WWE’s Combat Sport Crossovers Have Given Us WrestleMania Moments...
This weekend, two former UFC Champions will headline WWE’s most marquee of events, WrestleMania. [ ... ]
us-sports
Return of the Rattlesnake: Stone Cold Leads WrestleMania Saturday
WrestleMania 38 is almost here, as WWE prepares to stage its biggest shows of the year. Nowadays, the [ ... ]
us-sports
The Show of Shows: The Best Match From Every Single WrestleMania
WrestleMania weekend is upon us, as WWE prepares to stage the 38th edition of the biggest event in professional [ ... ]
us-sports
The Lion and The Hyena: 25 Years On From The Most Important...
“These people are standing, can you imagine the pain that is racing through Austin’s body? [ ... ]
us-sports
Stone Cold Steve Austin Accepts Kevin Owens' WWE WrestleMania...
“Whether you want to call this ‘The KO Show’, a match, a fight, a brawl. Whatever. [ ... ]
us-sports
30 Years Since LA Lakers Retired Magic Johnson's 32, His True...
During this week, back in 1992, the LA Lakers chose to retire the number 32 jersey worn by the [ ... ]
us-sports
Michael Jordan At 59: The Man Who Changed What It Meant To Be...
In the summer of 1998, Michael Jordan won his final NBA Championship with the Bulls. Six months later, [ ... ]
us-sports
Everything You Need To Know About WWE Elimination Chamber
WWE returns to Saudi Arabia this Saturday for Elimination Chamber. After a relationship between WWE [ ... ]
us-sports
Any Given Dre Day: Hip Hop Royalty Rules The Super Bowl
The Los Angeles Rams are your Super Bowl Champions, beating the Cincinnati Bengals 23-20 to lift football’s [ ... ]
us-sports
NFL Super Bowl: Los Angeles Rams Battle To Heroic Super Bowl...
A rousing speech from the Rock set the atmosphere for what was about to unfold. This game had it all [ ... ]
us-sports
NFL Super Bowl LVI Preview: Ask The Fans - Cincinnati Bengals...
You ought to have read our NFL Super Bowl previews on the Cincinnati Bengals and the Los Angeles Rams [ ... ]
us-sports
NFL Super Bowl Preview: Everything You Need To Know About The...
It has been some year for the Los Angeles Rams. They kickstarted their campaign with comfortable wins [ ... ]