It was one of the most chaotic days of Test cricket ever but by shortly after tea on day two in Ahmedabad England had lost a second successive match to India and were contemplating the fact they can no longer reach the inaugural World Test Championship final.

On a day of utter madness, England were given hope by a session in which they took seven Indian wickets, including five for eight from skipper Joe Root, but their own batting failures came back to bite them on an unpredictable surface as they were skittled out for 81 in the second innings.

India wrapped up a 10-wicket win by quickly knocking off the 49 runs they needed at the end of a breathless period of play after which there will be countless questions over the quality of batting but considerably more about the surface prepared for this match.

Resuming on 91 for 3, India soon found the going tough as the pitch played more likely a day four or day five surface than one on which there had been only 81.4 overs played before the morning session began. With each Indian wicket that fell, the prospect of England batting on the same surface became ever more torturous.

After Root mopped up the Indian tail with his part-time spin, it felt inevitable that the home side, with the likes of Ravi Ashwin and Axar Patel in their ranks, would make hay. “I think it sums the wicket up slightly if I’m getting five wickets on there,” quipped Root afterwards, and he certainly wasn’t wrong.

England did themselves no favours with the bat though. Zak Crawley went first ball playing down the wrong line and Jonny Bairstow was initially given out one ball later playing all around a Patel turner which thumped into his chest guard. While DRS showed the ball was missing, there was little reprieve for the Yorkshireman, who was bowled out next ball to end his return to the side with a pair. 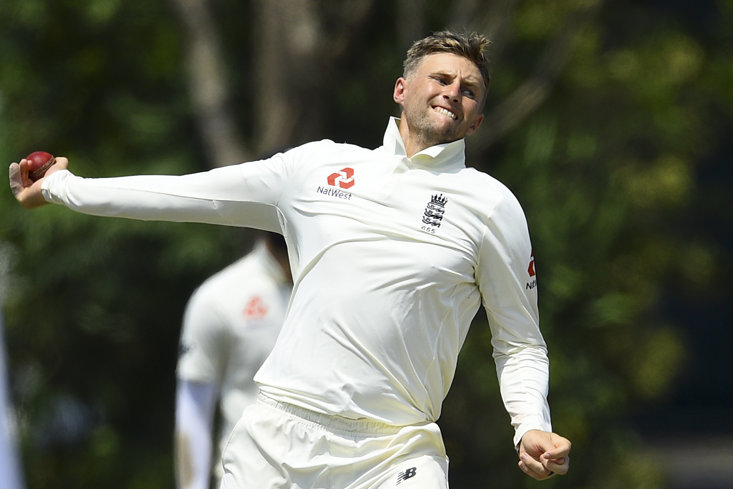 From there it didn’t get much better. Only Root (19), Ben Stokes (25) and Ollie Pope (12) reached double figures as the tourists lasted only 30.4 overs second time around. In total they had lasted 79.2 overs for their 20 wickets in the match, and Rohit Sharma and Shubman Gill soon wrapped up a win which gives the home side a 2-1 lead going into the final test next Thursday.

Questions must be asked about how England looked at this pitch and thought it wise to go into the match with Stuart Broad, Jimmy Anderson, Jofra Archer and Stokes in a four-pronged seam attack with Jack Leach as their only front-line spin option. But surely nobody could have foreseen that it would deteriorate to such an extent that the match would be done before the second day was out.

Pitch aside, England have a lot to learn from this Third Test. They need to be braver with their selection when it comes to meeting the needs of the conditions, and there has to be some hard graft it terms of their batting line-up finding ways to relieve the pressure on turning wickets. Only Root has found form in truth during the five matches of their winter so far across Sri Lanka and India.

For India, there is the knowledge that a win or a draw will take them into the inaugural World Test Championship final against New Zealand. Draws, though, appear to be an increasing relic in Test matches, with surfaces like this one doing nothing for the concept of balanced contests between bat and ball.

If England are to rescue a series draw with a win in the Fourth Test, again in Ahmedabad, they will have to improve in both departments and keep their fingers crossed that the groundskeepers do a better job second time around.

x
Suggested Searches:
Manchester United
Liverpool
Manchester City
Marcus Rashford
Premier League
More
cricket
The Greatest Test Match: England's 2005 Edgbaston Ashes Win...
It felt like the peak of Test cricket at the time. Arguably, it remains the greatest ever game in the [ ... ]
cricket
Time For Joe Root's England To Find Some Consistency - Sidebottom
Former England Test bowler Ryan Sidebottom insists that Joe Root’s side must turn in a stirring [ ... ]
cricket
Ben Stokes' Break From Cricket Highlights The Strides Made On...
It is a truly wonderful thing that Ben Stokes will not be in England’s Test squad to face India [ ... ]
cricket
Ryan Sidebottom: England's T20 Hopes Have Received A Huge Boost...
We’ve seen the likes of Jonny Bairstow, Ben Duckett and James Vince flashing the bat to great [ ... ]
cricket
Ryan Sidebottom: The Hundred Is ''Off To A Great Start'' After...
Ryan Sidebottom believes cricket's divisive new tournament 'The Hundred' proved [ ... ]
cricket
Ryan Sidebottom: Why The Hundred Is A Game Changer For Women's...
For women in particular, The Hundred is huge. Ahead of the first ball being bowled it has had its doubters [ ... ]
cricket
England Can Dream Of Another World Cup Win, Two Years On From...
“By the barest of all margins.” The inimitable Ian Smith couldn’t have summed it up [ ... ]
cricket
The Newcomers Looking To Help Fire England To An ODI Win Against...
An inexperienced England are facing a huge test as they have been forced to name a brand new 18-man [ ... ]
cricket
Perennial Finalists New Zealand Finally Come Good To Win World...
New Zealand finally got the job done. In 2015 they were the entertainers of the tournament at the Cricket [ ... ]
cricket
Sophia Dunkley Is England's Newest Cricketing Icon That Can...
Sophia Dunkley is a history maker. She became the first black woman to play Test cricket for England’s [ ... ]
cricket
ECB Right To Suspend Ollie Robinson As Cricket Looks To Learn...
Culture Secretary Oliver Dowden joined a number of outspoken critics of the ECB’s suspension of [ ... ]
cricket
New Zealand Bring Desire, England Are Just Dire As First Test...
When New Zealand could have batted for a draw, they went hell for leather on the final day at Lord’s. [ ... ]
cricket
''I Can Still Improve'' Jimmy Anderson Part Of Resurgent Older...
Whisky. Fine wine. Jimmy Anderson. Just three things that get better with age. England’s highest [ ... ]
cricket
World's Best Cricketer Ben Stokes Has Become England's Imperfect...
If there is one thing the British public love more than an underdog story, it is a tale of redemption. [ ... ]
cricket
England Just Fall Short Against India Despite Sam Curran Heroics...
England came up short against India, losing by just seven runs in an absolutely thrilling ODI decider [ ... ]
cricket
England’s Aggressive Batting Pays Off As Bairstow And Stokes...
When England’s top three bat like this, there is simply no side in the world that can stop them. [ ... ]
cricket
Three Years On, Steve Smith Deserves Big Praise For His Response...
On this day three years ago the entire sporting world collapsed on Steve Smith’s shoulders. In [ ... ]
cricket
Root's Calm Head Missed As England Collapse To 66-Run ODI Loss...
India have defeated England by 66 runs in the first one-day international in a game that will once again [ ... ]
cricket
India T20 Win Over England Could Be Perfect Precursor To 2021...
England have lost the T20 series in India 3-2 having been comprehensively beaten in the final match. [ ... ]
cricket
Blistering Buttler Leads England To Bounce-Back T20 Win Over...
England showed their resilient side on Tuesday as they bounced back from Sunday’s defeat in the [ ... ]
cricket
Kohli Takes Centre Stage As England Come Up Short Against India...
England came up short in the second T20I match v India, losing by seven wickets as Virat Kohli proved [ ... ]
cricket
Archer And Roy Star As England Sweep India Aside In Opening...
England began Twenty20 World Cup year in emphatic fashion as they hammered India by eight wickets in [ ... ]
cricket
Weather No Excuse, England Must Learn From Woeful Batting Performance...
How quickly things can change. England’s 227 run win in the First Test v India feels like a lifetime [ ... ]
cricket
Why A Massive Fourth Test Against India Could Define England's...
England’s whole year might well ride on the outcome of Thursday’s Fourth Test against India. [ ... ]
cricket
Sidebottom Wants To See Both Broad And Anderson Play Third Test...
Former England bowler Ryan Sidebottom says England ought to select both Stuart Broad and Jimmy Anderson [ ... ]
cricket
The Hundred Can Help Revolutionise Women’s Cricket And Inspire...
The long-awaited The Hundred competition is set to revolutionise cricket and will finally kick off this [ ... ]
cricket
Should Test Cricket Lose The Toss After India's Battering Of...
England have nobody to blame but themselves for the manner of their 317-run mauling at the hands of [ ... ]
cricket
Sidebottom Hails ''Fantastic'' Root And ''Stunning'' Anderson...
Ryan Sidebottom has heaped praise on both Jimmy Anderson and captain Joe Root following England’s [ ... ]
cricket
Fantastic Jimmy Anderson Wraps Up A Statement England Win In...
England wrapped up a dominant First Test win over India on Tuesday, with Jimmy Anderson collecting three [ ... ]
cricket
100 Up! Joe Root's Timely Form Could Be The Difference For England...
He is the baby-faced batsman who slotted into England’s line-up in India in 2012-13 and immediately [ ... ]