Motorsport
News
The legendary driver-turned-broadcaster put on a show like no other in the Miami sun
Joey Mills
15:05, 09 May 2022

As Miami, Florida played host to its first ever Grand Prix this weekend, one man emerged as the undisputed star of proceedings. That honour did not fall to race winner Max Verstappen, nor points leader Charles Leclerc who finished second, maintaining his impressive season. No, the man of the hour was somebody who has not raced in Formula One since 1996. The Miami Grand Prix belonged to one man: Martin Brundle.

Over the course of 15 minutes of riveting television, the British motorsport legend redefined what sports coverage means. He was not a fish out of water so much as a dolphin forced into a bottle of Evian. Put Brundle in a pit lane full of racing’s cognoscenti and he will reward you with anecdotes and insight from the sport’s biggest names. Put Brundle into a pit lane full of rappers, US sport stars, actors and influencers and he will deconstruct the very notion of celebrity in a way not seen since the days of Andy Warhol.

The first three minutes are classic Brundle. The 62-year-old gets his sea legs under him during straight-bat interactions with 1978 F1 World Champion Mario Andretti and McLaren Racing CEO Zak Brown. So far, so Sky Sports F1. But then the veteran broadcaster says the words that would see his gentle pre-race amble descend into abject chaos. “Let’s have a little mooch down this way,” he smirks, still completely at ease surrounded by racing people doing racing things. “Let’s see who we can find”. But even once he’d found them, in many cases Brundle himself would have no idea who he had found.

Brundle spots the Williams sisters, and zeroes in on their position. Sidling up to Venus first, he makes the first attempt at an interview. “Are you cheering for Lewis?” he asks of the eldest sister of tennis’ first family. Like Diego Maradona sitting down an England defender in 1986, she spins from the metaphorical grasp of his small talk and hugs DJ Khaled. Our first hint that this whole exercise is going to be absolutely unhinged. As Venus spins out of the Khaled interaction, she breezes past a dejected Brundle. But our anchor is unbowed, and he immediately goes for the double with a seamless transition to Serena.

Serena ignores him with a face like she’s just watched Will Smith’s Oscar acceptance speech, and Brundle is flustered now. But you don’t compete in 158 Grand Prix races if you’re easily discouraged. “What do we think of this event here in Miami?” he directs back at Venus. This time she responds, offering vague platitudes about being excited to see “Lewis and all the drivers”. Brundle, quite rightly, expected more from the inspirational tennis champion. The microphone hangs in the air, waving in the wind as Brundle silently presses Williams for more. Too busy greeting friends to read the subtle cues of the man who came third in the 1977 British Saloon Car Championship, she cuts down the mighty Martin with a withering “What was the question?”.

Dejected, Brundle nervously laughs “That was a nice surprise wasn’t it”, with the air of a man who received a salmon hand-knitted jumper for his birthday instead of the Foyle’s War box set he asked for. But Brundle pulls the nose of the plane up with aplomb, as he arrives at the first guest of the afternoon who appears happy to see him. “This is a man called DJ Khaled”. The hip hop hit-maker had cameoed in our bizarre human circus earlier, but he bailed out Brundle magnificently here. Running through the tropes that have made the DJ a walking meme, Khaled ended the breeziest interaction of the entire quarter-hour with his trademark “Another One” catchphrase. Brundle x Khaled is the collaboration we never knew we needed. Basketball legend Dwayne Wade popped up during this segment, with Brundle treating him like an intrusive fan. As soon became clear, the F1 great struggles to recognise basketball players.

The best interviewers understand that the right subject can make their careers. David Frost and Richard Nixon. Howard Cossell and Muhammad Ali. Like all titans of broadcasting, Brundle identified his own white whale; Kansas City Chiefs quarterback Patrick Mahomes. What the Sky Sports pundit could not identify is what Mahomes actually looks like.

“Patrick!”, he exhorted to a tall gentleman in a Balenciaga top making his way through the paddock. The figure doesn’t react. We would soon find out why. Upon turning round, “Patrick” turned out to be NBA prospect Paolo Banchero. Not that Brundle worked this out, even while interviewing him. Prepped for a career in the media-trained world of professional ball, Banchero gives a full and friendly answer. So does Brundle style it out, knowing he got away with it? Of course not, he cuts Banchero off with a withering “it’s not Patrick”, and moves on. Ruthless. 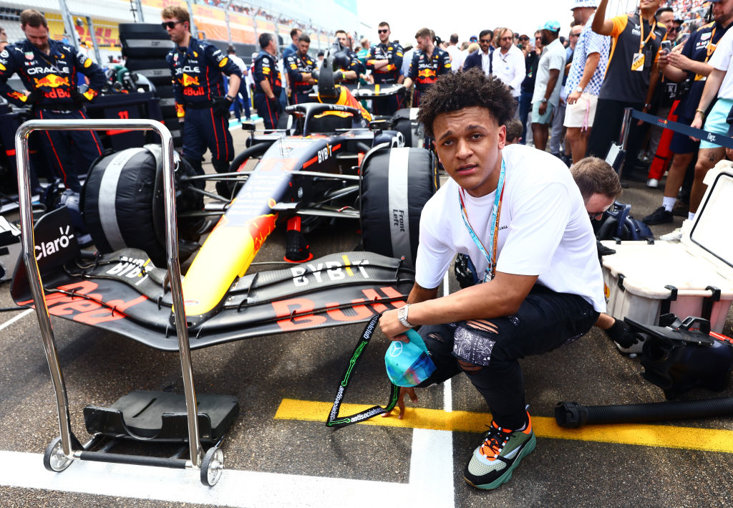 Brundle is spiralling at this point, openly pleading for someone, anyone F1-related. He gets his wish when David Coulthard emerges, like a lighthouse on the horizon. Alongside the 13-time Grand Prix winner is Red Bull Team Principal Christian Horner. Finally Brundy is back in his element, among the great and the good of motor racing.

Palette cleansed by some good old ruddy chat about cars, Brundle is renewed for another swipe at the notion of celebrity. He collars a silver fox of a gentleman with a no-nonsense “I don’t know who you are”. “A social media sensation!” comes the reply from the well-heeled elderly influencer. Brundle flashes him with a look that says “You’re hardly Nigel f*cking Mansell, pal” and moves swiftly on. Hitting his stride now, this is Brundle After Dark, Brundle Unchained, The Brundle Identity. He is a man restored, and he patrols the pit lane like Sonny Liston stalking across a boxing ring.

Pharrell Williams is the next celebrity in his sights, and another surprising slice of cultural awareness from the big man. Brundle obviously bumped N.E.R.D back in the day. The interview is average celebrity fluff, the sort you’ve seen on the red carpet dozens of times. But crucially, Brundle doesn’t tell him he’s a nobody and walk off. Therefore, it is an improvement.

Sick to the back teeth of the rich and famous of Florida, Brundle demands, “Has anybody seen a racing driver?!”. He is snapped out of his purist cries by a familiar sight, a celebrity whose name even he can’t f*ck up. Brundle spots David Beckham and immediately gives chase.

Describing his media strategy in real-time, Brundle’s plan to “head him off at the pass” sounds less like Brundle wants to interview Beckham and more like he’s planning to mug him. This aesthetic is maintained when the beleaguered broadcaster bellows “MARTIN BRUNDLE SKY!” while just inches from D-Beck’s tattooed neck. Beckham makes a break for it, presumably marking himself as “Safe from Brundle” on Facebook as he does so. But he isn't safe. No one is safe from the relentless pursuit of the lesser-spotted Brundy. 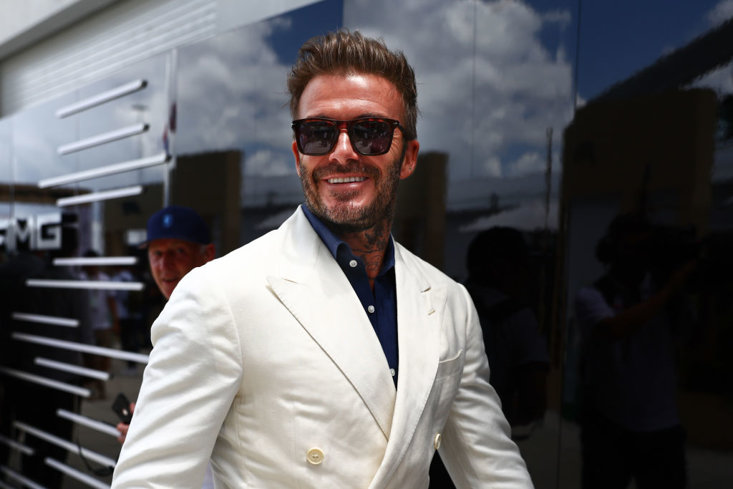 no one is safe from brundle, not even david beckham

Hiding like a wolf among sheep, Brundle perches behind the Red Bull team as they have a group photo with the former footballer. Then when the shot is taken, he dives out of the mass of humanity with a repeated “MARTIN BRUNDLE SKY!”. Beckham, wary that this breathless man in the Hawaiian shirt might do him some serious damage, stops to answer his question.

So what question did our hero ask after his thrilling game of cat-and-mouse to catch the most famous English footballer of all time? What nugget did Brundle extract with every inch of his journalistic nous? “What do you reckon to all this?”. This is why Martin Brundle is the king. The man risked life and limb to ask the same question you’d pose to your neighbour if you happen to both be in the garden at the same time. Magic.

Brundle’s odyssey was a thrilling, anxious, hilarious and exciting watch. Was it a daring reminder that celebrities are just people, unless we know who they are? A scathing commentary on a sport where the drivers are becoming secondary to the ceremony? Or was it just an indefatigable bloke in his 60s not knowing any pop culture from the last 20 years? In truth it was all of this and more, and for that we thank you Martin Brundle. The best interviewers ask the tough questions and Brundy asks the toughest one of all; “Who are you?”.