Nick Kyrgios was branded “a bully…with an evil side” by beaten opponent Stefanos Tsitsipas after the Australian came through an explosive, ill-tempered and controversial clash on Court One with the No4 seed 6-7, 6-4, 6-3, 7-6 late on Saturday night.

This was tennis, but not as we know it in a flurry of code violations, docked points, angry thrashing of the balls both at the opponent and the crowd and surrounding structures. In the end, after Kyrgios started acting up early on, both players could have been defaulted for various transgressions during a contest that saw the usually unflappable and soulful Greek Tsitsipas see red and completely lose his rag in the face of provocation and borderline intimidation.

It was all going so well for the world No5 as he claimed the first set on a tiebreak. But if Kyrgios’s plan was to rattle the cage and see what happened, it worked like a dream. He received a code violation after another linesperson walked to the umpire’s chair and reported his language and never stopped haranguing the officials.

With the atmosphere growing increasingly electric in the crowd and icy on the court, when Kyrgios clinched the second set to level at 1-1 Tsitsipas smashed a ball into the stands. Kyrgios remonstrated with the umpire claiming double standards, and that is he had done the same he would have been defaulted. It was certainly close to a default offence. But the Greek escaped with a first code violation.

In the third set Kyrgios threw in an underarm serve and Tsitsipas, by this stage raging and in the middle of the red mist, smashed the ball towards the far end of court on the full. Such was the noise, he didn’t realise he had been docked a point for the next game until he was about to serve and saw the 0-15 scoreline, triggering an exchange with the umpire.

After a couple of near misses Tsitsipas finally hit Kyrgios in mid-court with a fierce drive, and when Kyrgios got two net-cords serving for the third set there were no apologies. The Aussie was also throwing in some sarcastic applause, and cried of ‘Great return’ when his rival hit it out. Amazingly, the pair have played doubles together in the past.

But Kyrgios saved some of his brilliant best for the fourth set tiebreak with that set played unfer the roof and the lights, and won the match with another audacious drop shot as the spectators went wild. The handshake was brief.

This match had plenty extra riding on it, which surely added to the tension, with now a clear path to the semi-finals or beyond for the winner. Brandon Nakashima is next for the Australian, with compatriot Alex de Minaur a possible quarter-final opponent.

Tsitsipas said: “I am disappointed with some of the things that happened out there, there comes a point where it is tiring and difficult to ignore. It's constant bullying, that's what he does. He bullies the opponents. He was probably a bully at school himself. I don't like bullies. I don't like people that put other people down.

“He has some good traits in his character, as well. But when he -- he also has a very evil side to him, which if it's exposed, it can really do a lot of harm and bad to the people around him. There is no other player that does this. There is no other player that is so upset and frustrated all the time with something. It triggers it so easy and so fast. I really hope all us players can come up with something and make this a cleaner version of our sport, have this kind of behaviour not accepted, not allowed, not tolerated, and move on better. 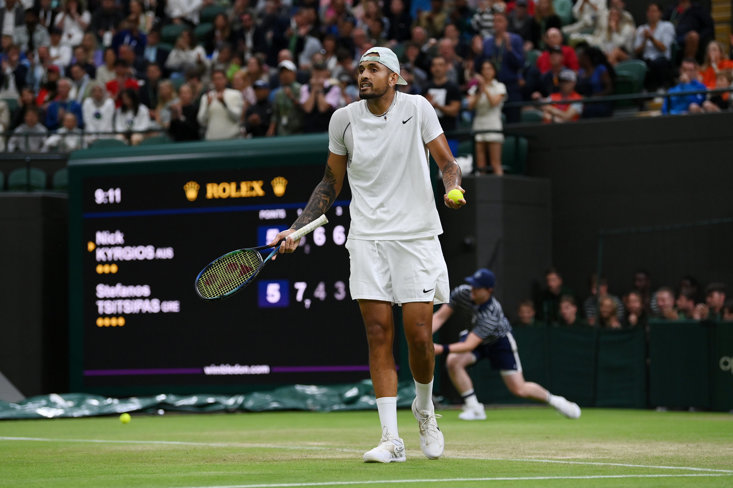 “I don’t usually play this way. I have to say it was really bad from my side. I have never done that before, throwing the ball outside the court in that way. I did apologize to the people. I don't know what went through my head at that time.

“But I cannot just sit there, act like a robot and act like someone that is completely cold and ignorant. You know, it has happened three, four times now. Okay, one time I understand, you know. But, like, if it starts happening two, three, four times, it really gets to your nerves.”

Kyrgios said: “I don’t know what to say to that. I am liked and have many friends. He is not liked, I’ll just put that out there. To call me a bully, if he is that easily thrown off his game, that’s soft. I have never had a handshake like that, ever.

“I’d be pretty upset if someone beat me two weeks in a row as well. Maybe he should look at doing something about that. And I was wondering why he was still on the court after hitting the ball into the crowd. If the roles had been reversed, I’d have been defaulted. He got the ball and smacked it into the wall and then it hit a spectator. There was no hate from me to Stefanos. What have I done wrong? He was the one hitting balls into the crowd and at me.

“It was a rollercoaster - an amazing match and a hell of an atmosphere. I honestly felt like the favourite coming in after playing him a couple of weeks ago but he is a hell of a player and I knew it would be a tough match. I had my own tactics out there, but he knows how to play me and has beaten me, and I have had success too. He was getting frustrated but it can be a frustrating sport.

“Everywhere I go I seem to play to full stadiums – the media like to write that I am bad for the sport, but clearly not. My self-belief is always high, I don’t really play a full schedule so I can be ready for performances and tournaments like this.”

Former British No1 John Lloyd agreed with Tsitsipas, claiming some of Kyrgios’s behaviour had been beyond acceptable. He said: “We’re going to be thinking about some of the brilliance of this man and some of the shots he played in that last tiebreak there.

“But as Stefanos Tsitsipas walks off there, you can’t help but think this match was unfair in so many ways. The intimidation, the umpire…the Nick Kyrgios situation has got to be stamped out more than it is being. The entertainment, I love entertainment – but it went way too far the things he was doing in those first three sets and I think he is fortunate to have been on the court.”