Cameron Smith had one of the comebacks of the year on Sunday at St Andrews, going -8 under par for the day and hitting five birdies in a row as part of his charge to overtake Rory McIlroy after a dismal Saturday performance.

Following his tremendous win, he faced the press who questioned whether he would remain on the PGA Tour after winning his first major, or would he move across to the Saudi-backed LIV Golf project. His answer might not be what the fans and purists wanted.

"I don't know, mate,” said Smith. “My team worries about all that stuff. I'm here to win golf tournaments.

“I just won The Open, and you're asking about that. I think that's not good."

It isn’t strange to see sports personalities dismiss comments following the biggest moments of their career, but the strange part about Smith’s answer, is that this is a completely different approach to the same question he was asked after winning the Players Championship mere months ago.

When asked after his first win, he said: “I think that the PGA Tour is the pinnacle of golf, and that's where I want to be.”

Now the landscape has changed. Many PGA players have made the switch to LIV Golf, and Cameron Smith’s close allegiances to his fellow countryman, Greg Norman, could see him leave the Tour as Open Champion to go to the tour he founded. 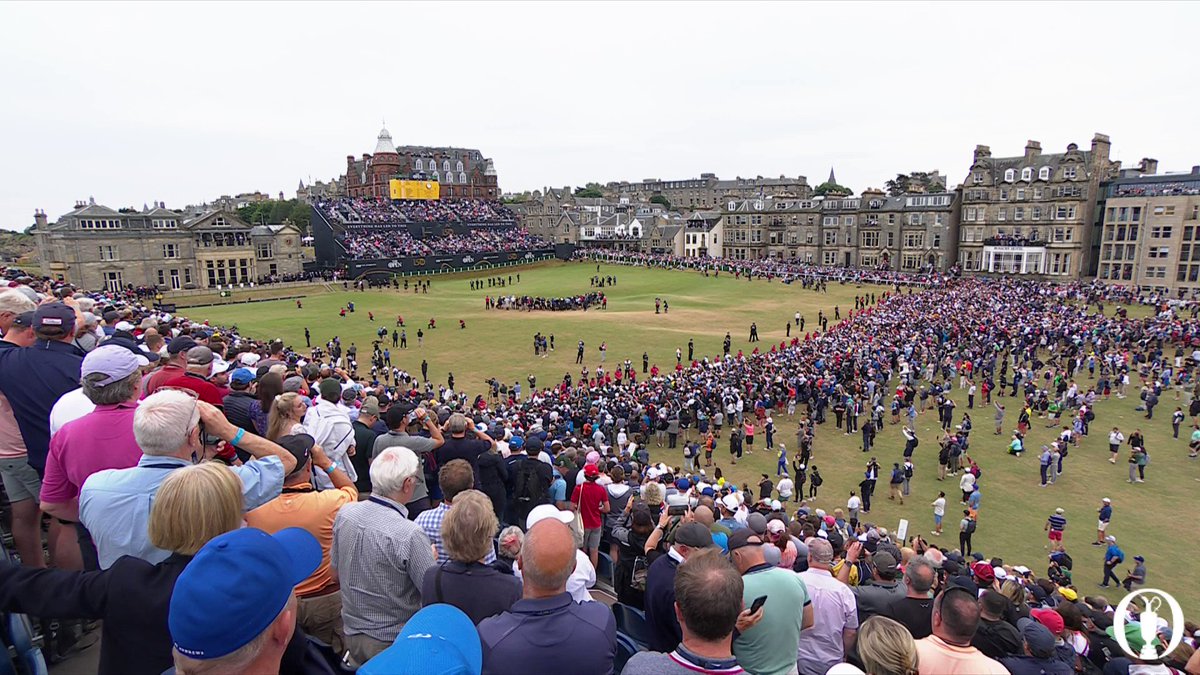 LIV Golf played a more subdued backdrop to last week’s competition, with the R&A purposely not inviting two-time champion Norman to their event and dinner for previous champions. Despite their best attempts of keeping the rebels out of the spotlight, the likes of Ian Poulter, Lee Westwood and Sergio Garcia were still fielding questions about their move away from the two traditional tours.

In terms of the magnitude of this potential coup for LIV Golf, for Cameron Smith to be considering a move at all is damaging for the two mainstream golf brands. Greg Norman will be rubbing his hands with glee at the thought of poaching the Champion Golfer of the Year, who will likely forfeit his tour card for the PGA Tour next season, ending his hopes of adding more majors to his career. As an Aussie, he will forfeit his place in the Presidents Cup, but with the popularity of that contest compared to the Ryder Cup being worlds apart, it’s unlikely that the Presidents Cup is the straw to break the camel’s back.

Alongside Smith’s controversial press conference, news of European Ryder Cup captain Henrik Stenson’s impending arrival in LIV Golf had become public knowledge. The Swede was set to captain Europe in a 2023 Ryder Cup on home soil that welcomed Team USA to Rome, however he will be removed as captain if he officially joins the new tour.

Other names touted for a switch to LIV Golf include two-time Masters winner Bubba Watson, 2021 Masters champion Hideki Matsuyama and British Ryder Cup hero Tommy Fleetwood, according to reports from The Times, The Mirror and Swedish news outlet, Expressen.

x
Suggested Searches:
The Sportsman
Manchester United
Liverpool
Manchester City
Premier League
More
golf
Luke Donald Confirmed As Europe's Captain For 2023 Ryder Cup
Luke Donald has been named Europe’s Ryder Cup captain, replacing Henrik Stenson who was sacked [ ... ]
golf
LIV Golf: The Players Who've Made The Switch And Those Who Haven't
LIV Golf arrived into the world of golf with a whimper, followed by a bang. After initial sniggers from [ ... ]
golf
Cameron Smith Wins The 150th Open Championship On Dramatic Final...
Cameron Smith has won The 150th Open Championship after a nail-biting finale at St Andrews. The title [ ... ]
golf
McIlroy & Hovland Share The Lead: Day Three At The Open Championship
All eyes were focused on the duel between Norway’s Viktor Hovland and Northern Ireland’s [ ... ]
golf
Tiger's Farewell Tears And Smith's Putting: Day Two At The Open...
Three-time champion Tiger Woods was left in tears at the end of his round on day two, in what he thinks [ ... ]
golf
McIlroy's Promising Start And Tiger Tees Off: Day One At The...
Rory McIlroy enjoyed almost the perfect opening round to his Open. The 2014 Champion Golfer of the Year [ ... ]
golf
WATCH: Ian Poulter's Extraordinary 160-Foot Putt On The Ninth...
Ian Poulter might have already made one of the putts of the tournament at the 150th Open Championship as [ ... ]
golf
Easy Tiger: The Top Five Open Championship Wins At The Old Course
Snead. Nicklaus. Woods. All of the greats have lifted the Claret Jug outside the famous Royal & [ ... ]
golf
The 150th Open Championship: A Guide For The Old Course
It’s game week and the 150th Open Championship is underway with practice rounds for the greatest [ ... ]
golf
Tiger Woods Says LIV Golf Defectors ''Have Turned Their Backs''...
Tiger Woods has waded into the PGA Tour’s feud with the controversial LIV Golf Series to reiterate his [ ... ]
golf
The 150th Open Championship: McIlroy Favourite As Golf Returns...
Words fail to describe the beauty of Scottish links golf. Greens the size of islands, filled with twists [ ... ]
golf
The Open Championship's Prize Pot Increases By 22 Per Cent
The winner of the 150th Open at St Andrews next week will receive a championship-record £2 [ ... ]
golf
Bryson DeChambeau Hopes People Can See The 'Good' Saudis Are...
LIV Golf star Bryson DeChambeau has said that he wants people to see the ‘good’ that Saudi [ ... ]
golf
The DP World Tour Bans LIV Golf Players From The Scottish Open
The DP World Tour has handed out £100,000 fines to all the players who competed in June’s [ ... ]
golf
R&A Confirms LIV Golf Series Stars Will Be Invited To The Open...
The Royal & Ancient Golf Club has confirmed that players signed up to the LIV Golf Series will be [ ... ]
golf
US Open Preview: European Stars Can Dominate The Top Ten
After weeks of folie à deux in the world of golf, the world’s finest players return to [ ... ]
golf
Rory McIlroy And Linn Grant Weekend Wins Overshadow LIV Golf...
The inaugural LIV Golf event at London’s Centurion Club was left in the dust on Sunday thanks [ ... ]
golf
The Troublesome Timeline Of LIV Golf: How Did We Get Here?
The most controversial topic in sport right now, the LIV Golf tournament, teed off on Thursday after [ ... ]
golf
Dustin Johnson's Defection Could Change Not Just Golf But Sport...
To call Dustin Johnson’s withdrawal from the PGA Tour on Tuesday “seismic” would be [ ... ]
golf
Everything You Need To Know About The 2022 PGA Championship
‘This is Major’ is the PGA’s chosen slogan for their flagship major event, as the [ ... ]
golf
Betfred Donate £19,000 To Prostate Cancer UK After Danny Willett...
Thorbjørn Olesen may have walked away with the Betfred British Masters title over the weekend, [ ... ]
golf
Betfred British Masters: Thorbjorn Olesen Triumphs With Spectacular...
Thorbjorn Olesen clinched the Betfred British Masters title with an incredible 35-foot putt on the 18th [ ... ]
golf
Thorbjorn Olesen Three Clear Heading Into Final Day Of Betfred...
Following a miserably wet Friday, the sunshine returned to The Belfry on Saturday as round three of [ ... ]
golf
Hurly Long And Danny Willett Shine On Day Two At Betfred British...
It was another action-packed day at The Belfry in Sutton Coldfield for day two of the Betfred British [ ... ]
golf
Great Danes Enjoy Profitable Opening Day At Betfred British...
If watching Christian Eriksen run the show in the Premier League wasn’t enough, now several other [ ... ]
golf
Everything You Need To Know About The Betfred British Masters
The British Masters is upon us and Danny Willett has chosen The Belfry again as the host for one of [ ... ]
golf
Phil Mickelson Plays Both Sides As Golf’s Civil War Begins
Phil Mickelson, American golf hero and people’s champion left many fans flabbergasted by [ ... ]
golf
Lazarus With A Five Iron: Tiger Roars Back At The Masters On...
On April 14 2019, the weather was looming ominously in Augusta, Georgia. The only thunder that ultimately [ ... ]
golf
Scheffler Shines, Rory Reborn & Tiger Returns: 5 Things We Learned...
Scottie Scheffler's stunning season continued this weekend as he clinched the first major of his [ ... ]
golf
Tiger’s Greatest Triumphs: Three Times Woods Defied All The...
You simply couldn’t write the life of Tiger Woods. A man that has seen it all, won the lot and [ ... ]