Just when they were on the verge of becoming the most domitable of all Fifa World Cup teams, Cameroon showed that their Indomitable Lions moniker actually does carry some meaning. From 3-1 down, they claimed a 3-3 draw with Serbia in Al Wakrah on Monday which keeps their group G campaign alive and means they avoid collecting an unwanted title.

Defeat to Serbia would have seen Rigobert Song’s outfit draw level with Mexico’s run between 1930 and 1958 by losing a ninth successive World Cup finals game, with five-time champions and 2022 favourites Brazil to come in their next match.

But having seemingly thrown the game away once, they battled back with second-half goals from substitute Vincent Aboubakar and Eric-Maxim Choupo-Moting in the space of less than three minutes.

The fact that Serbia allowed them back into the game tells us much about the Eagles, too. This is a team who had themselves lost nine of their previous 11 World Cup matches incorporating their various guises going back as far as Yugoslavia’s 1998 campaign. Make no bones about it, this was two bad sides making enough sloppy errors to make the whole experience fun.

Despite being second best in general play, it was Cameroon who opened the scoring after Andrija Zivkovic conceded a corner with a terrible pass backwards 40 yards from his own goal. From the flag kick, Nicolas Nkoulou flicked on at the near post and an untracked Jean-Charles Castelletto turned home at the back stick. That work was undone in first-half stoppage time though. 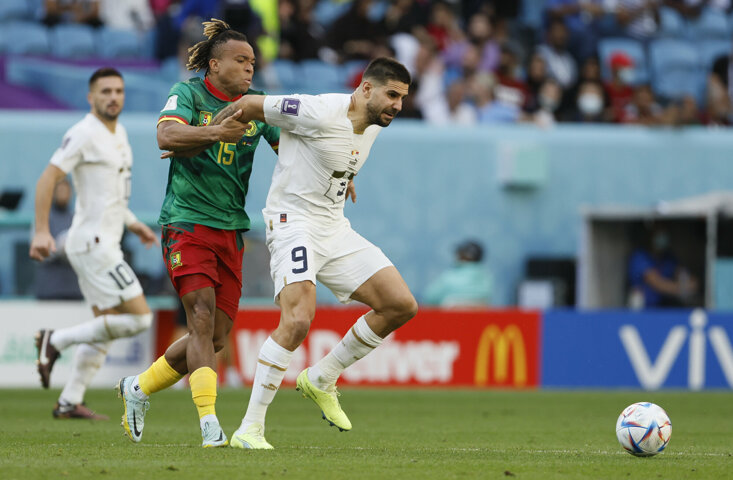 MITROVIC MISSED MANY A GREAT CHANCE

Dusan Tadic’s free-kick just about cleared Choupo-Moting’s leap and Strahinja Pavlovic headed superbly home. It was Serbia’s first shot on target – 46 minutes in – despite their general supremacy. Within minutes they were 2-1 up after Cameroon had gone chasing another lead and then been caught overplaying in midfield, Sergej Milinkovic-Savic eventually driving past a poor dive from Devis Epassy.

By the time a wonderful passing move had seen Milinkovic-Savic and Zivkovic teed up the previously profligate Aleksandar Mitrovic to make it 3-1, Cameroon seemed dead and buried.

That was when Song threw on Aboubakar and the game changed. Suddenly the Indomitable Lions were truly indomitable, and it was the 30-year-old at the heart of it all. When his audacious lob over Vanja Milinkovic-Savic dropped over the line and into the underside of the goal net, the captain stood motionless, knowing an offside flag was immediately going up. But the Var determined that Aboubakar was actually onside, and his side were back in it.

Two minutes later he was breaking in behind again, this time squaring the ball for Choupo-Moting to slam home an equaliser. It was a twist that had come out of almost nowhere.

They could easily have lost the game all over again, especially if Mitrovic had been in any kind of form. Having missed a sitter eight yards from goal at 0-0, the Fulham front man contrived to squander another couple of great opportunities with the scores tied.

The 3-3 score was one neither team truly wanted, but Cameroon desperately needed all the same. They are off the hook for the record of most consecutive losses in tournament history but right now neither they nor Serbia look round of 16 material.