As the Tokyo Olympic games are just around the corner, all eyes will be on Team GB’s women’s football team to see how they get on in their bid to win their first gold medal.

It is fair to say that there is a lot of pessimism surrounding Team GB’s chances after the amount of hurdles the team constantly faces with trying to form a team of four home nations. Their final group phase match against Canada will be played on Tuesday 27 July and everyone will be hoping that the team can progress past that stage.

Getting this far alone has been an outstanding achievement. It has taken a lot of talks and meetings between the home nations to agree to the existence of the team beyond London 2012, which have been far from easy. This was shown by there being no squad to represent Great Britain five years ago in Rio de Janeiro.

The pandemic has not helped either. It has not only extended the absence of a Team GB women’s football team but it has also affected the strategic planning that has had to be constantly redone a number of times. There has also been the lack of stability in leadership as the former England boss Phil Neville was supposed to lead Team GB at the Games before the Lionesses home Euros in 2021, but as both were delayed, he put a dent in all these plans as he linked up with David Beckham as the new head coach of Inter Miami. The FA were forced to make alternative arrangements and they turned to Norway’s former Olympic champion, European champion and World Cup winner Hege Riise, who was appointed as a temporary assistant coach. 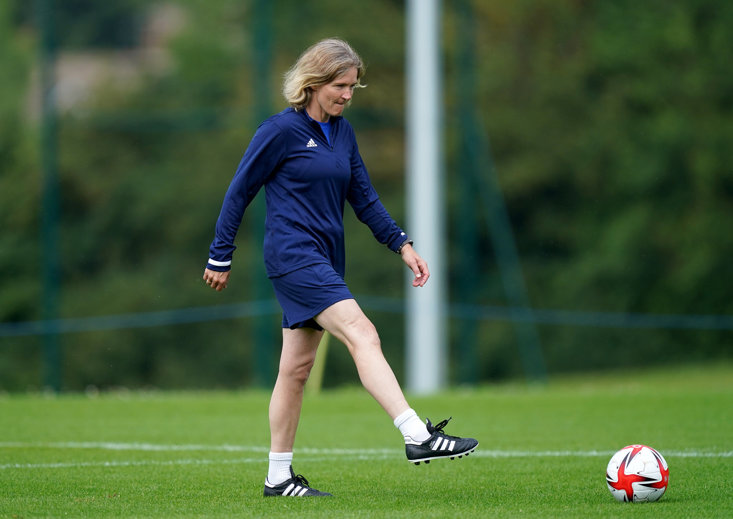 The preparations were always going to be tough seeing as Team GB have not played a competitive game together for nine years. Their best hope is the 19 England internationals in their ranks. World player of the year and Manchester City right-back Lucy Bronze made a joke on the situation saying they had gone nine years unbeaten. While there is confidence in the Lionesses representing Team GB, England have only played on three occasions this year.

They are considerably behind the opposition if you look at the stronger competition. The US, who are the reigning world champions, have had 12 games under their belt in 2021. The World Cup runners-up and reigning European champions, the Netherlands, along with Sweden, have played six games each. Team GB’s group of Japan, Canada and Chile have all played five, seven and four times this year respectively.

Nonetheless, the Team GB women’s team will have the full backing of the UK in Tokyo and while there is a sense of lack of time for preparation and team cohesion, there is plenty of quality in the squad which will boost their chances of leaving the Games with a medal.

x
Suggested Searches:
Manchester United
Liverpool
Manchester City
Marcus Rashford
Premier League
More
football
FPL Gameweek 10 Tips: Is Mo Salah Now A Permanent Captain Choice?
After a quite sensational gameweek in which three players scored hat-tricks and Manchester United were [ ... ]
football
The End Of An Era For US Women's Team As Carli Lloyd Hangs Up...
It’s the end of an era. Carli Lloyd has made her last appearance on the international stage in [ ... ]
football
On This Day In 1989: The Night 'Magic Chris' Waddle Became A...
They called him ‘Magic Chris’ in Marseille. Having been a fantastic flair player for Newcastle [ ... ]
football
Wednesday 27th October 2021 Football LIVE Blog
Welcome to The Sportsman's LIVE Football Blog, where we will be bringing you the biggest updates [ ... ]
football
Maitland-Niles And Nketiah Sparkle As Arsenal Book Quarter-Final...
Arsenal’s youngsters got the job done against an Leeds side devoid of any confidence to book their [ ... ]
football
Chelsea's Brick Wall Defence Could Crumble If They Don't Tie...
Antonio Rudiger has been a gladiator for Chelsea ever since Thomas Tuchel took over at the club. He [ ... ]
football
Ole, Mikel and Frank: The Era Of Club Legends As Managers Is...
In December 2019, there were three Premier League managers who could be considered legendary ex-players [ ... ]
football
Fifty For Fran: Kirby Has Come A Long Way To Reach England Milestone
England travel to Latvia for their fourth World Cup qualifier on Tuesday, and it could be a landmark [ ... ]
football
Tuesday 26th October 2021 Football LIVE Blog
Welcome to The Sportsman's LIVE football blog, where we will be bringing you all the biggest updates [ ... ]
football
Why 'Short-Term' Manager Antonio Conte Can Be Manchester United's...
Ole Gunnar Solskjaer is on the brink, and it leaves Manchester United in a perilous situation. They [ ... ]
football
What Next For Manchester United And Ole Gunnar Solskjaer After...
It was a bleak afternoon at Old Trafford as Manchester United were humiliated by bitter rivals Liverpool [ ... ]
football
Why This Liverpool Defeat Is Different For Manchester United...
A humiliating five-goal defeat to one of their closest rivals - Manchester United have been here before. [ ... ]
football
Euro Football Round-Up: Madrid Win Classico, Napoli Stay Top...
In a weekend which saw Jose Mourinho sent off – we know, big shock eh? – and Real Madrid [ ... ]
football
LIVE Football News: Follow Monday's Latest, Including Man Utd...
football
Living La Liga Loca: How Luis Suarez Made The Very Most Of His...
On this day in 2014, La Liga was graced with the highly-anticipated arrival of Luis Suarez as he made [ ... ]
football
Sensational Salah Gives Man Utd A Hiding, And Liverpool's Board...
Mohamed Salah is unquestionably the best player in the world right now. With a hat-trick in the 5-0 [ ... ]
football
Embarrassingly Inevitable - Time For Changes At Man Utd After...
It was shambolic, painful, embarrassing and everything in between. But more than anything it was entirely [ ... ]
football
100 Up For Alfredo Morelos, Rangers' Flawed Goalscoring Genius
Many observers of Scottish Premiership might at one time have had Alfredo Morelos down to reach 100 [ ... ]
football
Michail Antonio Is The Different-Maker As West Ham Outlast Wasteful...
Michail Antonio did it again on Sunday. The West Ham striker’s second-half strike was enough to [ ... ]
football
Man United's Midfield Is The Most Obvious Problem In Football
Even the wins don’t quieten down the criticism of Manchester United’s midfield. Fans and [ ... ]
football
How Brentford Have Quickly Become Part Of The Premier League...
It’s fair to say Brentford have quickly become an accepted part of the Premier League furniture. [ ... ]
football
Best In The League? Foden-Inspired Man City Hit Four Past Brighton...
Are Manchester City the best side in the league? Current Premier League leaders Chelsea would have something [ ... ]
football
Hat-Trick Hero Beth Mead Rescues Lionesses In Historic Win At...
It was far from the perfect performance in front of goal. England’s wastefulness nearly cost them [ ... ]
football
Why Mo Salah Is Outshining Cristiano Ronaldo As The Premier...
This weekend sees the fires stoked in the great rivalry between Manchester United and Liverpool as the [ ... ]
football
Academy Graduates Shine Bright As Chelsea Score 7 Past Woeful...
Chelsea remained at the top of the Premier League table after a trio of academy graduates got on the [ ... ]
football
LIVE Premier League Updates: All The Action From Saturday's...
The Premier League is back once again with another packed Saturday full of action and we will be covering [ ... ]
football
Gilmour’s Lack Of Playing Time At Norwich Is A Cause For Concern...
Chelsea fans are not best pleased right now. And it has nothing to do with the goings-on at their club, [ ... ]
football
Ellen White On The Brink Of History As Lionesses Welcome Northern...
When England host Northern Ireland in their Women’s World Cup qualifier on Saturday, all eyes [ ... ]
football
Arteta's Arsenal Continue To Click In Solid 3-1 Win Over Aston...
Arsenal would have looked at tonight’s clash with Aston Villa as a potential banana skin. The [ ... ]
football
Martinez Finally Getting His Chance To Shine After Years Of...
When Emiliano Martinez was an Arsenal goalkeeper he played more league games for Reading than he did [ ... ]