Mark Cavendish will return to the Tour de France for the first time since 2018 as the former Team Sky man continues his resurgence on two wheels.

The 36-year-old was named as a surprise inclusion in Deceuninck-Quick-Step’s eight-man squad to take part in the world-famous race that begins on Saturday, with his return posing one key question - can Cavendish still make an impact on the biggest stage of all?

The Isle of Man star has 30 stage wins to his name, a tally bettered only by Belgian legend Eddy Merckx with 34. Having said that, it has now been three years since he last competed in the Tour de France, begging the question of whether he has much left to offer at this level of cycling.

Any such concerns were put to bed as recently as April, when he won four stages of the Tour of Turkey before winning the final stage of the Tour of Belgium earlier this month. That Belgium display stands out as particularly encouraging, with Cavendish beating some of the leading sprinters around today in Tim Merlier, Pascal Ackermann, Dylan Groenewegen and Nacer Bouhanni on route to his 151st career victory. 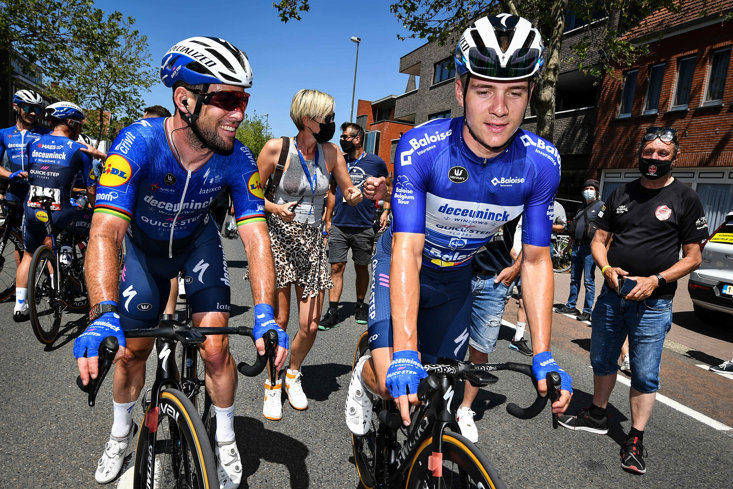 Cavendish at the Tour of Belgium

Cavendish’s gain is Sam Bennett’s loss. The Irishman won the green jersey in last year’s race, and is unable to defend his title after being ruled out through injury. The 30-year-old claimed two stage wins in last year’s race, and became just the second man since 2012 to beat Slovakian Peter Sagan in the points classification after Michael Matthews managed the feat in 2017.

Cavendish himself became the first Britain to top the points classification in 2011, and while repeating that achievement a decade on may be unlikely, the new call up heads into the historic race with his sights set on more than just making up the numbers.

“Obviously the circumstances with Sam could be better,” Cavendish admitted. “He had a special Tour last year and I am sad for him not being able to defend his green jersey.

“But at the same time, I am excited to be going back to a race that I have such an affinity with and where I have so much history.

“It is the biggest bike race in the world, and I am going to do all I can to grab this opportunity with both hands.”

Chris Froome picked up the yellow jersey in four of five years between 2013 and 2017, with Italy’s Vincenzo Nibali grabbing the victory in 2014. The Israel Start-Up rider has understandably struggled to replicate his blistering form of old, with that 2019 horror crash seeing the four-time champion suffer several broken bones including his femur.

Ineos Grenadiers have selected three Brits, including 2018 champion Geraint Thomas, 2020 Giro d'Italia winner Tao Geoghegan Hart and key team player Luke Rowe. With that trio involved, expect Ineos to be major players throughout. Meanwhile, Simon Yates will line up at the Grand Départ for Team BikeExchange, as Britain continue their tradition of enjoying a strong representation in the race.

For Cavendish, a general classification victory would surely rank as his greatest ever achievement on two wheels and Betfred will be following the action as it progresses. Timing his return to form to perfection, don’t be surprised to see him roll back the years and make an impact in some of the stage sprints.