On days like these, it seems Jose Mourinho is the leading member of his very own ‘self-preservation society.’ Having been appointed as the new Roma head coach, a role that begins this summer, his latest Italian job has to be the one that revives his career.

After his underwhelming performance at Tottenham, which saw him leave the club adrift of the top four and in a League Cup final, he will now take his tenth job of his career and return to Italy for the first time in eleven years.

Arguably, his performance with Inter Milan was the greatest achievement in his managerial career. He won back-to-back titles and In just two seasons won five trophies, culminating in that famous treble in 2010, which saw Inter crowned champions of Europe for the first time in 45 years, and the third time in their history.

That achievement is the Portuguese bosses' last true success in Europe. He won titles at Real Madrid but failed to win their prized asset, the Champions League. He returned to Chelsea as a hero but left in disgrace before taking the Manchester United job. His Europa League success was the last silverware of his career and having underperformed at Spurs, it seemed unlikely another job in England would arise.

And so he returns to the land where he is still so highly regarded. When he left Italy in 2010 he was the European champion, a hero, and was only moving on to take the biggest management job in club football - Real Madrid. It was a move he simply couldn’t turn down. Both Mourinho and club captain Marco Materazzi were famously left in floods of tears as they said their goodbyes but after a decade away, he has returned.

One thing is for sure, he will be heralded as a hero when he returns to play Inter, but the job he has at Roma is a huge challenge. At Inter he created an old school squad, players who thrived under his tough management style. Javier Zanetti, Materazzi, Lucio, Thiago Motta, Walter Samuel and Diego Milito all bought into his playing style and put their lives on the line for the cause. 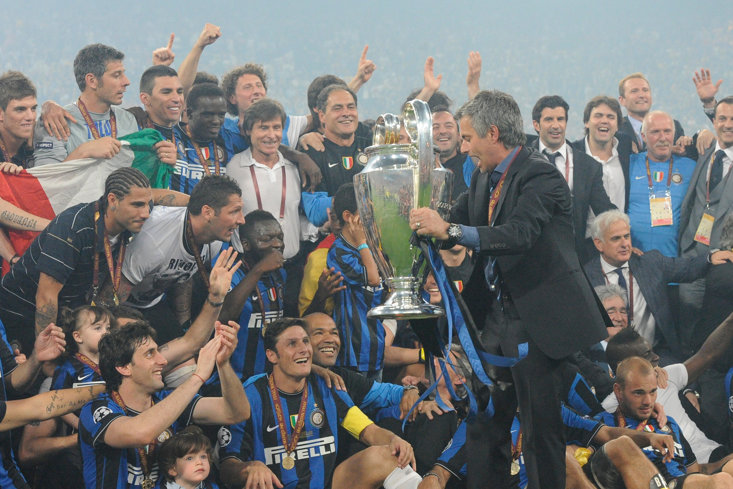 Roma lacks those sort of players and football has changed dramatically in the past decade. That old school player who can take heavy criticism simply doesn’t exist anymore and as we have seen with Luke Shaw, Dele Alli and several others - his management style can be abrasive and cause issues. At times when he was ‘only supposed to blow the bloody doors off’ he has detonated the entire changing room. Current Roma players Chris Smalling and Henrikh Mkhitaryan will be able to attest to that.

Given they will finish outside the top six in Italy and got thumped 6-2 by Manchester United in the first leg of their Europa League semi-final, Roma will not be playing European football next season. This is not a quick fix for Mourinho, but in a country where he is so highly rated, it could provide the perfect opportunity for him to rebuild his diminishing reputation.

The club from the capital are in desperate need of a rebuild and Mourinho has signed a three-year contract. So often the man to win major trophies, this could well be his biggest test. Is his management style now archaic and unsuited to the modern game, or can he pull off the Italian job? Failure here could leave his career dangling from a cliff edge.