An ecstatic Novak Djokovic clenched both fists and roared “Come onnnnnn!” after Juan Martin del Potro fired a forehand into the tramline, which brought to an end the 2018 US Open final, as the rejuvenated Serbian recorded a comprehensive three-set victory that subsequently moved him alongside American icon Pete Sampras on 14 Grand Slam singles titles.

The success was Djokovic’s third at Flushing Meadows, and second successive Slam on the spin following his success at Wimbledon earlier in the summer - he’s now won the Wimbledon-US Open double three times - with the All England Club triumph his first Slam since the 2016 French Open.

Djokovic is now once again the most successive tennis player in history, in terms of on court career prize money, having amassed £92m after receiving £2.94m for his US Open victory, which jumped him above Roger Federer (£90.1m), although the Swiss has 98 career titles to Djokovic’s 71, and seven more Slams but we’ll get to that later.

Since 2011 the dominant Djokovic has remarkably won 13 of the 32 Slams on offer. During this period he’s bagged the aforementioned three US Open titles, four Wimbledon trophies, one French Open, and five Australian Opens, while he also won Down Under back in 2008 which was his first Slam trophy.

In this era (2011 to the present day) Djokovic has twice won three Slams in a year (2011 and 2015), and at one point he remarkably held onto all four trophies. He completed the “Career Slam” in 2016 - becoming the eighth player to do so - after finally getting his hands on the French Open which came after three final defeats in four years, while 2017 is the only year within this period in which he fired blanks on the Slam front.

In the same time frame Federer has won four Slams, Nadal eight, Andy Murray and Stan Wawrinka have three apiece, whereas Marin Cilic (2014 US Open) is the only other male player to get his hands on one of the prized quartet of trophies. 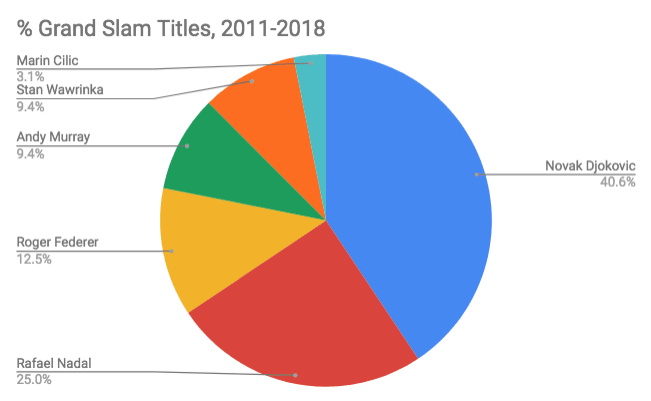 From a statistical point of view, Federer is the most successful player of all time on 20 Grand Slams. The immensely popular Swiss is also widely viewed as the greatest ever, and while he won only one Slam between 2011 and 2016 compared to Djokovic's 11, the 37-year-old has since showed that he's not finished just yet having grabbed three Slams in his last six showings, and he'll no doubt add to his overall tally before he puts away his racket.

Hot on Federer's heels is Nadal on 17 Slams, which includes a simply staggering 11 successes at Roland Garros. The Spaniard endured a couple of bleak and blank years in 2015 and 2016, but has since stormed back with two more French Open titles and a US Open success, while he has only failed to reach the semi-finals in two of his last eight Slams.

As touched upon, Djokovic is now tied with Sampras in 3rd-place, with the duo each on 14 Slams...but how far can the former go?

At 31 Djokovic has the potential to catch-up his rivals providing he remains fit, firing and perhaps most importantly, motivated. His defence his extraordinary, as is his stamina, ferocious competitiveness, fight, grit and mental strength, while his immense ability to thrive in pivotal moments is incredible. At his peak, he's arguably the best on the circuit.

You’d expect Djokovic to go on and move ahead of Sampras in the rankings, but the question is, can he catch Nadal, or even Federer?

Djokovic comes out on top in the majority of the head-to-head records. He edges Federer 24-to-22 wins in singles events, and 9-to-6 in Slams, while he leads Nadal 27-to-25 wins, although the Spaniard has the edge in Slams, 9-to-5, however Djokovic has won the last two duels.

History informs us he's thrived at the Australian Open, winning in five of his last eight showings, although he’s flopped on his last two visits. However, you’d expect him to finish top of the pile at least one more time. Nadal has obviously dominated the French, while Djokovic initially struggled on grass but has won three of the last five Wimbledons, and in his last three visits to New York he’s won two US Open titles, and finished runner-up to Wawrinka in the other.

Djokovic's summer double means another period of dominance could already be underway... 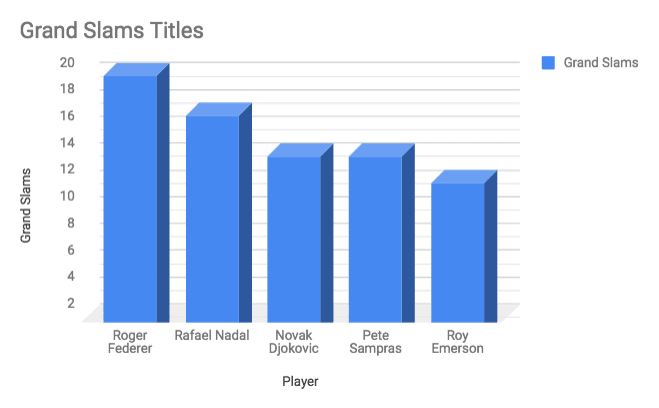 Top Male Grand Slam Winners
More
tennis
Andy Murray Can Still Compete But Has Nothing Left To Prove,...
Andy Murray knows a thing or two about creating history. The man who became Great Britain’s [ ... ]
tennis
Andy Murray Looking At Miami Open Return After Extended Injury...
Andy Murray is targeting a return to the court at the Miami Open later this month ending his extended [ ... ]
tennis
Maria Sharapova Deserves Respect For Taking Female Earnings...
Maria Sharapova has called time on her glistening career having won every single Grand Slam event and [ ... ]
tennis
Why The Next Month Is Vital For Andy Murray And His Wimbledon...
Sir Andy Murray’s hopes of competing at Wimbledon this year and defending his Olympic title in [ ... ]
tennis
An Open Victory Would Be Huge For Ash Barty, But Even Bigger...
Ashleigh Barty has reached the semi-finals of the Australian Open for the first time in her career following [ ... ]
tennis
Performance Over Outcome: Why Federer Is Still A Beast On The...
The superlative-defying Swiss is at it again. Roger Federer has muscled his way into the Australian [ ... ]
tennis
Mr Shakira And The Multi-Billion Pound Revamp Of The Davis Cup
Premier international tennis tournament the Davis Cup, fast approaching the 120th anniversary of its [ ... ]
tennis
The Young German Ready To Shatter Djok, Federer & Nadal's Ironclad...
Rafael Nadal’s hopes of finishing the season as world number one took a serious blow with a straight-sets [ ... ]
tennis
Here's Why Murray, Djokovic And Tennis's Stars Have Been Confusing...
Andy Murray, Novak Djokovic and the rest of the tennis world have been confusing reporters and fans [ ... ]
tennis
Serena Williams And The Numbers That Have Taken Her To The Verge...
With a straight sets victory over Elina Svitolina, Serena Williams once again stoked fans’ hopes [ ... ]
tennis
Daniil Medvedev: The Moscow Menace Infuriating At The US Open
“Every search for a hero must begin with something every hero needs: a villain.” That quote [ ... ]
tennis
Coco Gauff, Naomi Osaka And Taylor Townsend: Next Generation...
Taylor Towsend stole the headlines at the US Open as the 23-year-old rank outsider knocked out fourth [ ... ]
tennis
Serena Williams v Maria Sharapova: The Rivalry That Tennis Has...
Yesterday’s build-up to the US Open was full of the cliched lines we have heard on repeat for [ ... ]
tennis
Deaf Tennis Player Lee Duck-hee Etches His Name Into The History...
Tennis star Lee Duck-hee cemented his name in the history books at the Winston-Salem Open by becoming [ ... ]
tennis
Novak Djokovic On Course To Ransack Grand Slam Record
Tennis fans around the world are privileged in the current era to witness the most beautiful race for [ ... ]
tennis
Can 2019 Be The Year Of Rafael Nadal?
Rafael Nadal is playing some excellent tennis this year and has bounced back in spectacular fashion [ ... ]
tennis
Is Roger Federer Truly The Greatest Of All Time?
Roger Federer will take to the hallowed turf once again this afternoon to take on old foe Rafael Nadal [ ... ]
tennis
Cori Gauff Must Fulfil Her Huge Potential To Avoid Joining These...
Being a child superstar can be tough. Macaulay Culkin, Britney Spears and more recently Millie Bobby [ ... ]
tennis
Talking Balls: Slazenger’s Long And Illustrious Association...
The name Wimbledon will always conjure-up images of strawberries and cream, champagne, Henman Hill, [ ... ]
tennis
Arthur Ashe: The Only Black Man To Win The Wimbledon Singles...
Arthur Ashe is the only black man to win the singles title at each of Wimbledon, the US Open, and the [ ... ]
tennis
1997 Was The Year Of Martina Hingis: The Greatest Tennis Prodigy...
1997 was an eventful year in the world of sport. Tiger Woods rocketed into wider consciousness after [ ... ]
tennis
On This Day In 2011: Novak Djokovic Wins Wimbledon For The First...
Tennis feels like it's reaching the end of an era as the early days of Wimbledon race by. A golden [ ... ]
tennis
How The Simple Tennis Serve Transformed Into The Most Important...
Wimbledon - the best and most historic tennis tournament in the world got underway today. With two weeks [ ... ]
tennis
Virginia Wade: The Forgotten Champion Who Remains The Last British...
In 2013, Andy Murray ended a staggering 77-year wait for a British men’s champion at Wimbledon. [ ... ]
tennis
Wimbledon 2019: Who Holds The Records At The World’s Oldest...
The 2019 Wimbledon Championships are finally here and it looks set to be one of the most open tournaments [ ... ]
tennis
15-Year-Old Cori Gauff Makes History By Qualifying For Wimbledon...
Aged only 15, Cori Gauff has reached the main draw at Wimbledon for the very first time, and in doing [ ... ]
tennis
How Rafael Nadal Defied Injuries To Stay On Top Of His Game
The fates have conspired to ensure familiar foes Rafael Nadal and Roger Federer will meet in the semi-finals [ ... ]
tennis
Will We Ever See Another Golden Era Of Tennis Like This?
Sport is obsessed with gold. Golden eras, golden generations, golden boots. In recent years it’s [ ... ]
tennis
Wimbledon, US, Australian, And French Open: Which Grand Slam...
The glittering array of tennis superstars is of course enough to attract anyone to the Stade Roland [ ... ]
tennis
Miguel Angel: The Original Sporting Star Of The Nadal Family
As soon as the surname Nadal is mentioned, tennis is the first thing that comes to the mind of many [ ... ]
This website uses cookies
Cookies help us and our partners provide statistics. By browsing this website, you consent to the use of cookies in accordance with our Privacy Policy and Cookies Policy.
Accept & Close