Boxing
News
On the day he would have turned 50, The Sportsman remembers boxing's pre-eminent warrior
Joey Mills
06:55, 15 Apr 2022

On this day in 1972, a small township in Frosinone, Italy witnessed the birth of a warrior. Arturo Gatti’s name will live forever in the sport of boxing. He was not a pound-for-pound king.

He never amassed a ridiculous unbeaten record, losing in just his seventh fight to the brilliantly-named King Solomon. When Gatti did mix with boxing’s elite, luminaries like Floyd Mayweather and Oscar De La Hoya, he was well beaten. So why has ‘Thunder’, this most intoxicating of fight figures, endured? Why is his name still mentioned with warmth, affection and nostalgic recollection a full decade after his mysterious 2011 death? To understand the pull of Arturo Gatti is to understand boxing in a way the sport of kings is rarely considered nowadays.

Gatti’s achievements should not be discounted. ‘The Human Highlight Reel’ held the IBF junior lightweight and WBC junior welterweight championships, winning seven world title contests in his career. But Gatti is remembered more vividly for the nature of his fights. Rarely has a modern boxer been more exciting, more brave, more spectacular and more committed in search of victory.

The feats of willpower Gatti participated in were numerous. He battled through a broken hand to beat Gianluca Branco and lift the WBC belt. He was saved by the bell after eating 15 consecutive punches from Gabriel Ruelas, before stopping the Mexican in the following round. Due to the exhilarating, back-and-forth nature of many of Gatti’s fights, he took home four Fight of the Year awards from industry bible The Ring. Two of the bouts that netted him that particular award comprised two-thirds of perhaps the greatest trilogy boxing has ever seen.

Gatti’s three-fight series with Micky Ward immediately entered the pantheon of classic boxing rivalries. The two warriors had forged reputations in the art of brutal warfare, and were thought to be damaged goods going into their first fight in 2002. After their third bout in June 2003, where Gatti took a 2-1 lead in the series, the pair’s stock had never been higher. The trilogy made both men millionaires, and afforded them legendary status. Ward retired on top, while Gatti parlayed his newfound profile into a world title victory in his next bout. But what Gatti and Ward achieved over the course of 30 rounds transcends titles, it transcends perhaps even sport. What they demonstrated in those three wonderful fights was an undying warrior spirit that will live on through the ages. 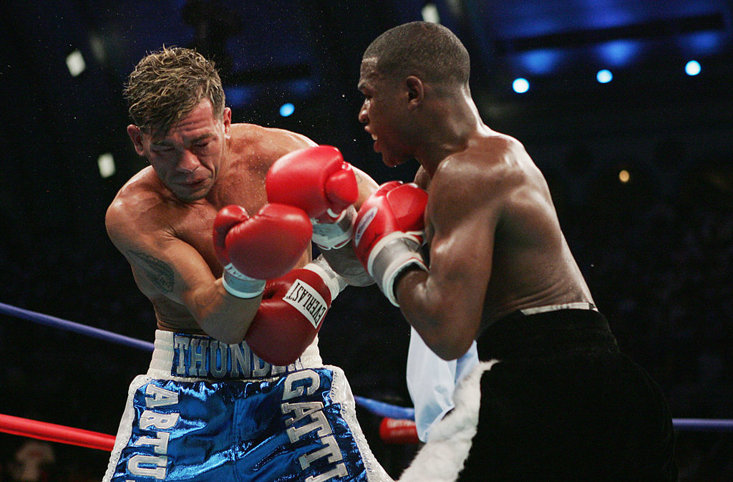 bridge too far: mayweather had too much lightning for 'thunder' gatti

Gatti rattled off three wins post-Ward, before running into another fighter that would come to define the era. Floyd Mayweather was still operating as ‘Pretty Boy’ in 2005, a 33-0 two-weight world champion who was yet to adopt the ‘Money’ moniker. The comprehensive beating Mayweather rained down on Gatti set him on the path to being the omnipresent figurehead of the boxing world. Uncharacteristically aggressive compared to his cautious later performances, Mayweather used his unreal speed as an attacking weapon rather than a defensive one. ‘Thunder’ was pinned back with lightning precision, unable to escape the constant punishment. Arturo’s second and final title reign ended at the gloves of a man who would soon become that generation’s pound-for-pound boss.

Gatti being Gatti, those who begged him to retire after Mayweather were silenced when he won his next fight. An 11th round TKO of Thomas Damgaard would prove to be the last victory of the legendary fighter’s career. Gatti came unstuck in the ninth-round of a WBC welterweight title fight with Carlos Baldomir, and ended his journey a year later with a stoppage loss at the hands of The Contender alumni Alfonso Gomez.

After nearly two decades comprising some of the most memorable ring wars of our age, Gatti deserved a long and contented retirement. Instead, he died just four years after calling time on his career. The circumstances of his death continue to be debated to this day. The former champion was found dead in his hotel room in Brazil, where he was due to attend his sister’s wedding. Investigations and conspiracy theories have raged over the years about the true nature of Gatti’s passing. The official word is that the fighter committed suicide, but there is significant doubt in some quarters over this appraisal.

But on what would have been the 50th birthday of Arturo ‘Thunder’ Gatti, it is better to remember the fighter he was than dwell on the way he was taken from us. Gatti was a champion, a warrior, a boxer, a puncher, and most of all he was a contradiction. In an era where everybody prizes their ‘0’ just a little too much, Gatti was a risk-taker. The entire sport of boxing would be just a little better off if everyone was more like the man they called ‘Thunder’.