On this weekend in 2014, Richard Keogh made an error that would cost Derby promotion in the most dramatic Championship play-off final in recent years. The Rams had been by far the better side in the Wembley sunshine against QPR and looked to be set for the Premier League when Gary O’Neil was sent off after an hour.

Steve McClaren’s side kept pressing forward but could not find a way past Robert Green in the QPR goal and then, late on disaster struck. Junior Hoilett foraged his way down the right wing before playing in a fairly innocuous ball into the box, towards the Derby defender. Keogh attempted to clear but instead did nothing more than lay the ball into the path of Bobby Zamora who does not miss those sort of chances in big games.

The net rippled which sparked jubilation for the blue half of Wembley and complete and utter desolation for Derby. Keogh himself was left sprawled on the floor, wishing the ground would open up and swallow him as a whole season of effort and promise disappeared in an instant.

Fast forward five years and Richard Keogh has become a key part of Derby’s recent history an almost ever-present at the back. He has played more than forty league games every season for the Rams since 2012, and this season, he has started every single game. 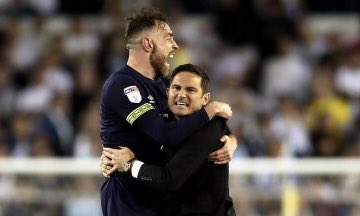 No less than 11 Derby managers (including interims) have managed Keogh during his time at the club and none of them have dropped him. Not only has he been reliable in his defensive duties but his ability to bring the ball out from the back and stay composed has also been key, no matter who has been in charge.

This was evident during the final goal in Derby’s remarkable 4-2 away win against Leeds in the play-off final second leg. Keogh intercepted the ball on the halfway line before offloading it to Mason Mount. Instead of standing still he charged forward and received the ball back before playing a perfectly-weighted pass into the path of Jack Marriot who sent the Rams to Wembley.

Current manager Frank Lampard cannot speak highly enough of his trusty captain: "Richard Keogh is a warrior. He is our leader on the pitch and he has been fantastic for me this season.”

However, Keogh himself is not dwelling on the potential Wembley redemption that could come on Monday afternoon. Speaking to Rams TV he commented: “Not really to be honest. I just see it as an opportunity, another opportunity that we’ve worked so hard for.

“I think, back when what happened last time, it was tough not just for me personally but for everyone at the football club. We’d had such a great season and played so well on the day and just how it ended wasn’t nice. Every player goes through difficult moments in his career and sometimes every setback is a chance to get better and come back stronger. Not just me individually but the whole team as well.”

He may not want to put too much pressure onto the match before kick-off, but play-off glory would be the ultimate and deserved redemption for the Derby County captain.