Wimbledon is loved for its rich history and we get to witness another piece of it as the quarter-finals of the men’s singles get underway. With Felix Auger-Aliassime and Denis Shapovalov securing their places in the quarter-final, it means that for the first time in Wimbledon history that there will be two Canadians in the last eight of the draw.

After a five-set thriller against German fourth seed Alexander Zverev, young Auger-Aliassime (seen above) showed his passion as he was consumed in a moment of ecstasy as he reached his first ever Grand Slam quarter-final.

He showed his resilience and skill to compose himself after Zverev battled back to two sets each but the Canadian was able to hold his nerve and outfox the German. The 20-year-old was clinical in the final set as he won the match 6-4 7-6 (8-6) 3-6 3-6 6-4. He served 17 aces, which allowed him to break in crucial moments in the match.

Following the historic moment for the youngster he said courtside, “It’s a dream come true. Surely this is the best victory of my life.” He will now face Italian Matteo Berrettini, who won at Queen’s last month. Auger-Aliassime’s desire to contest every point has been evident at the All England Club so far and there is no doubt he will provide a tough test for Berrettini when they meet.

His compatriot Shapovalov has also been very impressive at Wimbledon this year. He began to hit his stride on the grass court this tournament where he defeated wild card and two-time Wimbledon champion Andy Murray. 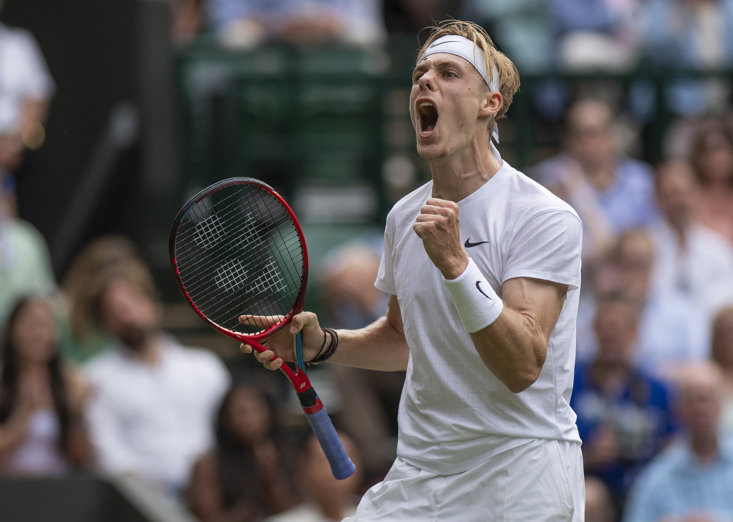 The Canadian was viewed as a party pooper for ruining the Briton’s long-awaited return to SW19, but spectators could not argue as he was simply better than the Scotsman in almost every aspect on the court. Shapovalov beat Murray in straight sets 6-4, 6-2, 6-2 and that fired him up for his round of 16 clash with Roberto Bautista Agut, whom he also defeated in straight sets 6-1, 6-3, 7-5.

Shapovalov has been thrilled with the level he has been playing so far at this tournament. In his post-match interview against Bautista Agut, he said, “I played some really high-level tennis today. I got a little bit nervous in the third set, but that is totally normal, and I dealt with that really well.

“I played flawlessly and I am super happy with myself. To beat a player like [Roberto] Bautista Agut in straight sets backs up my level from my match against Andy [Murray].”

Both Canadians will be starting to think about achieving history by becoming the first ever champions from the North American nation at Wimbledon. Milos Raonic has come the closest so far, reaching the 2016 final but he was ultimately beaten in straight sets by Murray.

With two Canadians in the last eight for the first time in the history of the tournament, there will be a sense of optimism across the Atlantic that either Auger-Aliassime or Shapovalov could etch their names into an incredible piece of tennis history this month.