Saul ‘Canelo’ Alvarez will face Billy Joe Saunders in a world title fight on May 8 after dispatching Avni Yildirim on Saturday night. The Mexican won the bout after mandatory challenger Yildirim failed to answer the bell for the fourth round and will now take on undefeated Brit Saunders for a shot at the WBA, WBC and WBO belts.

Canelo floored his Turkish opponent in the third round, landing a cool left-right combination before following up with additional blows forcing Yildirim’s trainer Joel Diaz to call an end to the bout. The 30-year-old looked in control throughout, landing jabs to Yildirim’s head, a man who has been inactive since February 2019. Any rare comebacks that came his way, he dealt with comfortably.

Fighting at the Hard Rock Stadium in Miami, Canelo defended his World Boxing Council and World Boxing Association belts and said, "I wanted to have a great fight and I did what I had to do.

"I needed a knockout and that's what I did. It doesn't matter if they're taller, if they've got more reach, or they've got a good trainer. I came to do my job, I came here to win." 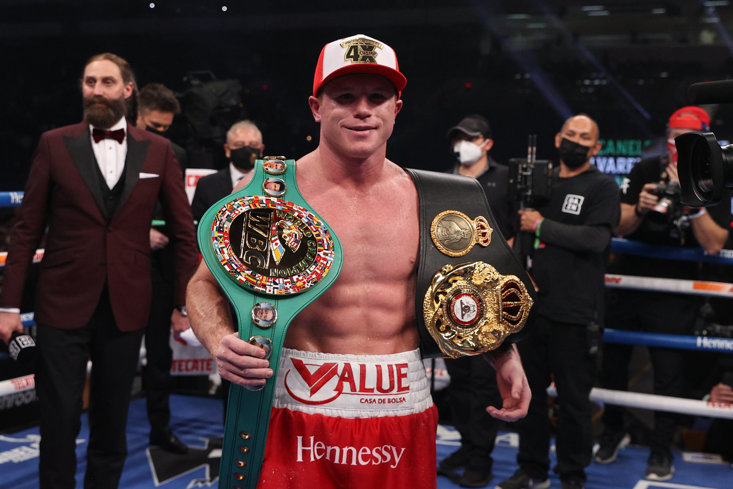 Win he did, to set up a tantalising encounter with Saunders. Boxing promoter Eddie Hearn tweeted his excitement in the early hours and announced, “IT’S OFFICIAL!!! The unification is on! @canelo v @bjsaunders_ for the WBC, WBA, WBO and Ring Magazine World championships May 8 live on @daznboxing.”

It looks set to be a packed year for Canelo. His next opponent, Saunders, is the World Boxing Organisation titleholder while American Caleb Plant holds the IBF super middleweight title.

Canelo, who beat Callum Smith in December, is now aiming to become the first-ever undisputed champion of the division and insisted, "No-one has done it. I want to make history. No-one has done it at 168 [pounds]."

Saunders, meanwhile, is ‘ready to rock and roll’ and praised Canelo when he said, "You have to dare to be great and you are not going to be a great if you don't beat the greats.

"I believe I am the only one with the footwork, knowhow, skillset, mindset and brain to unlock that door in Canelo."

With just over two months to go until the big fight, the hard work continues in earnest.