Boxing
News
The Mexican superstar is aiming to fight four time over the next 12 months
Kieran Spratt
13:00, 27 Feb 2021

The first fight in a potentially blockbuster year for Saul ‘Canelo’ Alvarez takes place this weekend when he defends his WBA, WBC and Ring super middleweight titles against Avni Yildirim at the Hard Rock in Miami on Saturday night.

Canelo has drawn a bit of criticism for this weekend’s opponent, and yes, mandatory challenger Yildirim isn’t the most glamorous fighter we’ve seen the 30-year-old contend with over the years but it’s a mere appetiser for the banquet of boxing that the Mexican superstar plans on taking part in across 2021. Every champion is entitled to a so-called ‘easy’ fight every now and again, and given his plans to fight four times before the year is out, we should maybe take a step back and appreciate the bigger picture.

Should Canelo emerge victorious in Florida, a unification with WBO super-middleweight champion Billy Joe Saunders looks likely in May and then, should he win that one too, Canelo says his plan is to become undisputed at 168lbs before the year’s out. We live in an era where sometimes it’s not that uncommon for a world champion to fight once or twice per year, if that in some cases, and here we have Canelo, fighting twice that. Let’s not forget he outclassed a world-class Callum Smith just a little over two months ago, too. Canelo’s ambitions are bold but there’s no reason to believe the pound-for-pound star won’t commit to them.

"I like challenges, I like big challenges. I like to make history and I like to fight the best," Alvarez told CBS Sports on Wednesday. "I like the history that I'm making. As one of the best, that's how I want people to remember me. At the end of my career, my numbers will speak for themselves and people will see what I did. 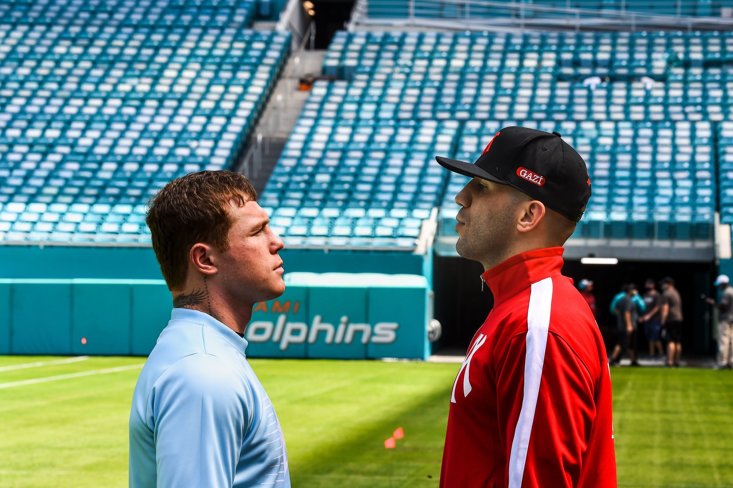 Canelo Squares Up To Yildirim, CHANDAN KHANNA/AFP via Getty Images

Already a four-weight world champion and the undisputed face of the sport right now, can Canelo’s bid to improve an already enviable record in the ring fall at the first hurdle against Yildirim? The Turkish boxer has a solid 21-2 record as a pro but lost the two biggest tests of his career so far against Anthony Dirrell in 2019, and, probably most famously to UK fans, in spectacular fashion to Chris Eubank Jr in 2017. Put it this way, if the betting underdog (12/1 to win with Betfred) was to spring an upset, it would likely be on the levels of Buster Douglas vs Mike Tyson.

Canelo certainly won’t cement his legacy this weekend against Yildirim but with much more lucrative bouts in his sights and a chance to solidify his status as one of the best ever over the next 12 months, he can’t afford to make any slip-ups.