Carlo Ancelotti made history over the weekend as Real Madrid were crowned champions of La Liga for a record-extending 35th time following a 4-0 victory over Espanyol at the Bernabeu.

The Italian has become the first manager in history to win the title in each of Europe’s top five leagues, while he also became the oldest manager to win La Liga at 62 years and 325 days . Goals from Rodrygo, Marco Asensio and Karim Benzema sealed the title in style in front of the home crowd.

The La Liga title eluded Ancelotti in his first stint as boss between 2013 and 2015 and when he returned to the Spanish capital last summer from Everton it always felt as though he was determined to go back and win the league with Los Blancos. He was successful the first time around as he delivered the club ‘La Decima’, their historic 10th European title in 2014.

“A lot of emotion, we have met a challenge,” said Ancelotti.

“The season has been spectacular. Lots of consistency. I have to thank the players for their work and attitude. Today we have to celebrate, not talk. I want to celebrate. It fills me with pride to win in the five major leagues. I can say that I like what I do. It means I’ve done pretty well.”

The 62-year-old’s major European league triumph came back in his homeland with AC Milan in 2004, a year after guiding the Rossoneri to Champions League glory. Six years later he won the Premier League crown with Chelsea before winning Ligue 1 with Paris Saint-Germain in 2013 and then the Bundesliga with Bayern Munich in 2017. 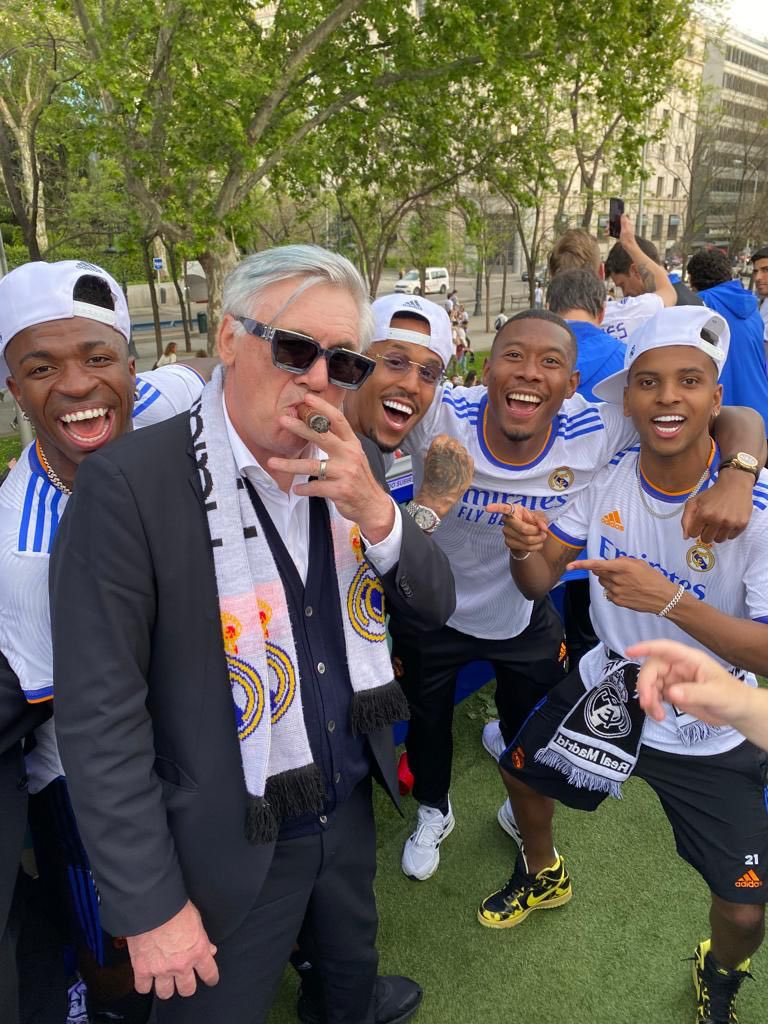 Any manager on the cusp of coaching greatness would have done exactly what Ancelotti did when Real gave him a second chance to help him achieve managerial stardom. He and his team have worked extremely hard to deliver this title, which they sealed with a 17-point gap on second-placed Sevilla, with four games to go. He has now claimed 22 honours across his impressive managerial career.

The celebrations were jubilant and there was an open-top bus parade where the players took to the streets to celebrate with the fans. They learned from Sergio Ramos’ mistake from 2011 when he dropped the Copa del Rey trophy by making sure that this piece of silverware was strapped down. We were all then treated to one of the greatest photos of all time with Ancelotti captured smoking a huge cigar with players Rodrygo, Vinicius Jr, Eder Militao and David Alaba.

This La Liga victory was not only an iconic win for Ancelotti, but for Los Blancos’ long-time left-back Marcelo as well. The Brazilian has now become the most decorated Real Madrid player of all time with 24 titles to his name across his 15-year career at the club. The 33-year-old is edging closer to hanging up his boots but he is still showing he has what it takes to help deliver trophies for the Spanish giants. Marcelo’s legacy will be immortalised at Real and he will likely go down as one of the greatest left-backs to have ever graced the game.

Elsewhere, the title race in Serie A remains extremely tight with two points separating leaders AC Milan and Inter Milan. Both clubs sealed victories at the weekend with AC Milan winning 1-0 at San Siro against Fiorentina thanks to a late Rafael Leao goal after capitalising on a goalkeeping howler to snatch the three points. For Simone Inzaghi’s side, Ivan Perisic and Lautaro Martinez were the goalscorers as Inter won 2-1 at Udinese to make sure they kept up the pace with their bitter rivals with just three games remaining.