Spanish prodigy Carlos Alcaraz was delighted to overcome his first real test on the grass court at Wimbledon but still doesn’t see himself as a favourite for the championship title.

The 19-year-old was handed a baptism of fire on his SW19 debut, coming through a five-set thriller against Jan-Lennard Struff 4-6, 7-5, 4-6, 7-6, 6-4 on Court 1 thanks to 30 aces and some exquisite shots that would suggest he was a seasoned pro rather than the rising star that he is. The world No. 7 certainly gave spectators their money’s worth, with his encounter with the German lasting over four hours.

The teenage sensation’s stock has risen rapidly over the last nine months having claimed two Masters 1000 titles including the Madrid Open, and reaching the quarter-final stages of the 2021 US Open and last month’s French Open. He had already proved himself on both hard and clay courts but everyone was itching to see how he would adapt to grass - and he didn’t disappoint.

Speaking on his first encounter with the surface at the All England Lawn Club, Alcaraz said: “First of all, I enjoyed it a lot. Great battle, four hours almost the match. I enjoyed it. For me, playing on grass is so beautiful. I like to play on grass. I would say my level on grass has to improve a little bit. But I'm happy with my level on grass today. Of course, I'm not an experienced player on grass. 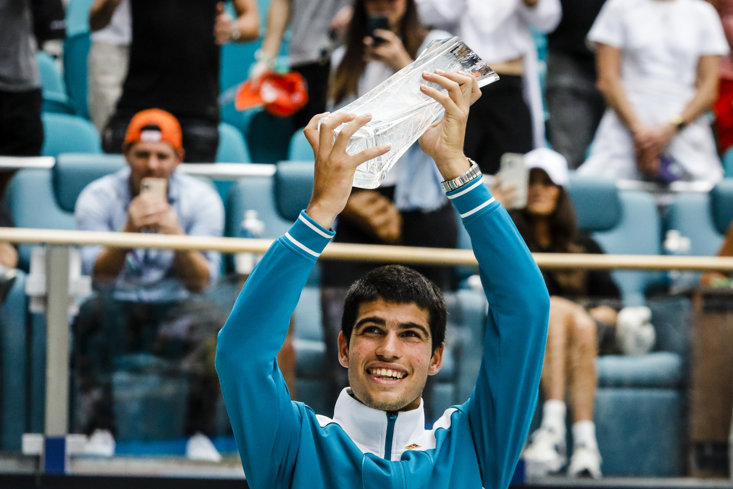 As he dazzled the crowd with some brilliant rallies and returns you would never have believed that this was his competitive debut on grass, which just further raises his ceiling on the ATP Tour and would suggest that he is a strong contender to steal Novak Djokovic’s crown this summer.

However, the teenager feels that he isn't a contender for the singles title at this year’s Championships because this environment is brand new to him.

“I don’t rank myself as one of the favourites to win this tournament,” he said. “Obviously if I play well, I have the level to win the tournament. But there are a lot of more experienced players on grass, more players play better on grass than me.

“I don't feel the pressure. I'm, just still getting experience playing on grass and enjoying every match.”