Josh Warrington fights for world honours once more this weekend when he takes on IBF featherweight king Kiko Martinez in Leeds.

‘The Leeds Warrior’ is meeting the Spaniard in the ring for a second time, having fought back in 2017, which Warrington won by majority decision.

Speaking to Anthony Crolla and Dom McGuinness on Betfred’s Lightweight Boxing Show, the 31-year-old says he’s chomping at the bit to take on ‘La Sensacion’ once again on Saturday night.

“I think it’s when your back is against the wall and it’s been a few years since I’ve been in that situation.

“When I came through, even when I boxed him [Martinez] five years ago, my back were against the wall then. Then I had my final eliminator, [Lee] Selby, [Carl] Frampton, [Kid] Galahad - all of them fights, my back was against the wall.

“When I’m an underdog then it just brings something else out of me. I just want to say ‘I can’ when people say that you can’t.

“I’ve certainly got the bit between my teeth, it’s been a very good camp and I just can’t wait for Saturday night.” 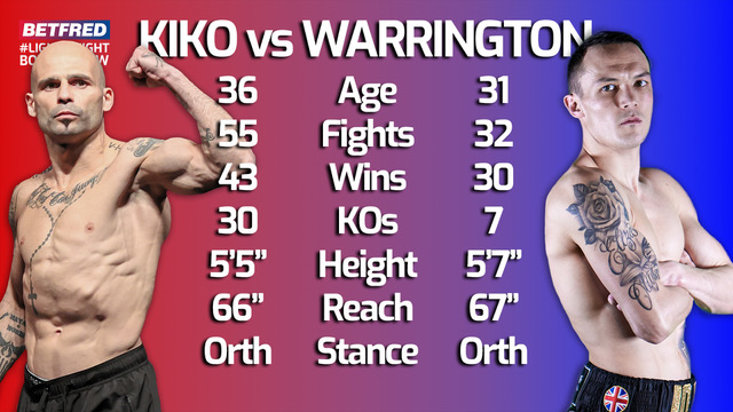 Should Warrington emerge victorious against his veteran opponent at the First Direct Arena, then he would become a two-time world champion. Asked whether he plans to take the show on the road to the USA for his next fight, Warrington replied:

“I’ve been wanting to do that for so long. I’ve been unfortunate with Covid, then obviously I took my eye off the ball against Mauricio Lara, so that put a bit of a delay on things. But it opens the doors right up.

“I’ve got options. I was saying to my missus, getting ready for the Lara rematch, ‘a few more, a few more’ but then all of a sudden I’m like ‘Love, you know what, there might be another five or six in here.’

“You’ve got [WBA title-holder] Leigh Wood who had that fantastic fight the week before. I’d love to go to the City Ground and take over there, but for so long I’ve been saying I want to go to the States, so we’ll see what happens.

When asked about a fight at the home of Nottingham Forest would be like, Warrington, a die-hard Leeds United fan, responded:

“Carnage. Obviously Forest and their connection with Brian Clough and all that stuff.”