Jamie Carragher doesn’t matter what it is, but he probably cares who you are if you want to answer that. Carra sprung his podcast upon us late last year, ringing up his mates from both the world of sport and entertainment to fill in the Gary Neville-shaped hole opposite him for some engine football-related chitchat.

The questions aren’t the most challenging, the jovial barbs can be spotted a mile off, but this in a sense makes the podcast extremely enjoyable, to listen to - knowing and expecting what interrogatives are coming and falling head first for the pub-chat. Not every pod has to have Newsnight-level depth

‘Who’s your favourite player?’ ‘What’s the best team you’ve ever seen?’ The answers are genuinely interesting when they’re coming from the likes of Messrs. Thierry Henry, Michael Owen, and Steven Gerrard.

The title ‘The Greatest Game’ doesn’t refer to the overall concept of the show - the pod is generally used for the mutual love of the game between the host and guest, in this regard ‘The Greatest Sport’ might be a more apt one - which prioritises delving into the individual guest’s club affiliation, and the low and highpoints that come with that allegiance, as well as reliving the atmosphere of special stadium nights in their team’s history. It helps that each guest is unabashedly a football fan and obviously willing to converse with Carra. 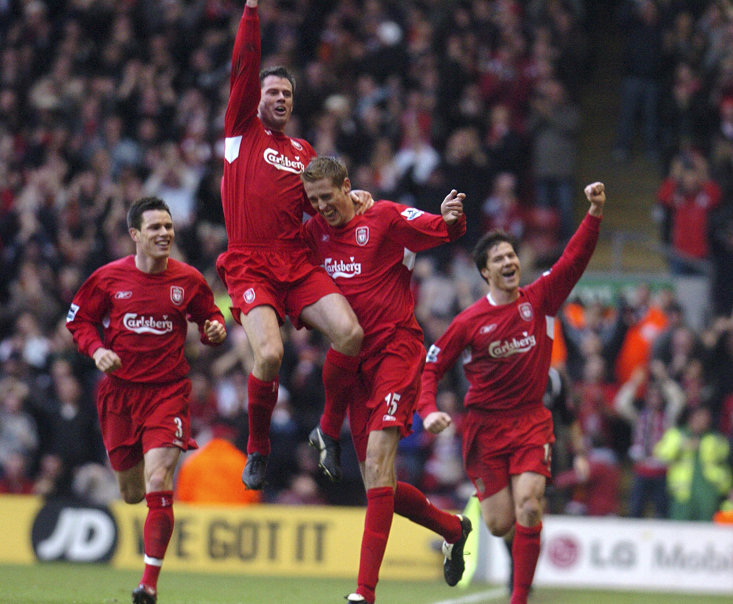 Carragher back in his liverpool playing days

The diversity of the invitees’ background keeps things fresh. Listening to England’s Rugby World Cup winning-captain Martin Johnson discuss his dual-love for both the sport he grew up watching and the one he excelled at as a career is genuinely fascinating.

Line of Duty actor and Celtic fan Martin Compston going through his devotion to the Hoops along the rollercoaster of the late 20th and earlies 21st Century, musician Niall Horan of One Direction fame,  a die-hard lifelong Derby County, explains goading Leeds United fans and, as a kid, having to get the ferry from Ireland to Holyhead, a train to Crewe, then from Crewe to Derby, and then back again), on the same day - just to watch the Rams at Pride Park.

The Scouse accent isn’t for everyone, but Carra has really and truly endeared himself to the masses in his post-playing career as a pundit, and as one of the most respected figures working in the broadcasting heavens today his show deserves attention.

Carragher eventually encourages his guests to select their ideal five-a-side team, with the individual either jamming them packed full of legends either from their club or from the spectrum of the sport altogether.

At the moment, there are few more listenable shows than The Greatest Game, with 14 episodes for you to consume.

Even though the Liverpool love-in needs to be reined in occasionally from the former Red defender - you’ll lose count of the amount of times the 2005 Champions League Final in Istanbul or the tired Gerrard/ Scholes/ Lampard debate gets mentioned - trying to get someone to squash their enthusiasm is a pointless and foolish task.

And The Greatest Game? We don’t need to hear about Arsenal at Anfield or Camp Nou ‘99 for the umpteenth time. It turns out the best games, Carra helps illuminate, are the most personal.