Football
News
The Brazilian picked up his fifth booking of the season against Crystal Palace on Wednesday
Conor Keane
11:30, 19 Jan 2023

Manchester United suffered a double setback on Wednesday evening as they were held to a point with a 1-1 draw with Crystal Palace and their star midfielder Casemiro picked up his fifth booking of the season for a challenge on Wilfried Zaha.

It was a booking that came as a crushing blow to everyone at United with Casemiro now unavailable for their biggest game of the season on Sunday against league leaders Arsenal. The Red Devils currently trail Mikel Arteta's side by eight points in the Premier League table.

With United’s exceptional form since domestic football resumed after the World Cup, the talk of them being involved in this year’s title race has grown exponentially. Boss Erik ten Hag has been working wonders in his first few months in charge. He has taken a split dressing room and brought it together in harmony, playing some great football with a lot more organisation as a result.

A lot of that organisation came from Brazilian Casemiro. The defensive midfielder has been one of the club’s best signings in a long time, acting as the shield between the midfield and defence, a role which United have been crying out for for years.

The 30-year-old has helped bring some much-needed calm to the side and it has enabled many of his teammates to rediscover their own form. People questioned United for spending around £70 million on an ageing player but he has proven to be worth every penny for his role in the team’s transformation. 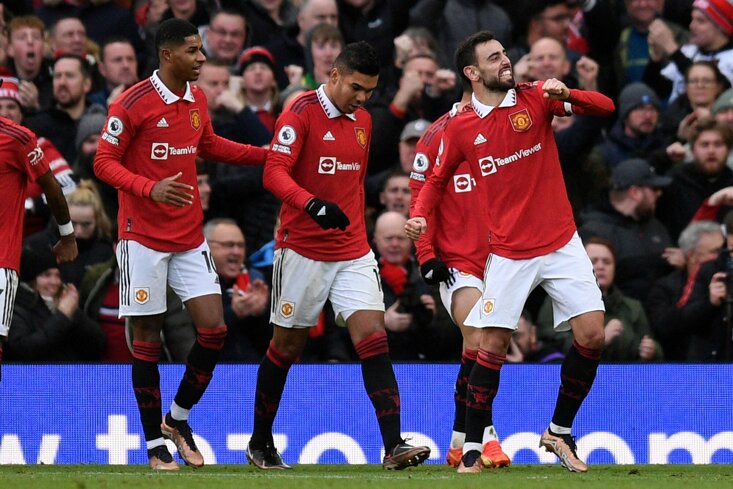 No Manchester United player has made more tackles than the former Real Madrid star (53) in the Premier League. Only Lisandro Martinez, Raphael Varane and Harry Maguire have made more than Casemiro’s eight blocks this term, and only Martinez and Varane have made more clearances than the midfielder’s 35.

Casemiro reads the game brilliantly which is shown through the 22 interceptions he has made in the league. He has also won 102 of his duels while also making the same number of recoveries. Casemiro has also not made one single error that has led to a goal which tended to be a huge problem with other players at Old Trafford before his arrival.

So when he was shown the yellow card at Selhurst Park on Wednesday, the look of devastation on the faces of the coaching staff shows just how crucial he is to Ten Hag’s system and the way they play. Had it been any other player to miss the gargantuan clash at the Emirates Stadium this weekend, it would have been deemed manageable. Losing Casemiro is going to be a huge disadvantage for them and either Scott McTominay or Fred are going to have to really step up in his absence.

Man Utd are 11/4 to beat Arsenal with Betfred*