Football
News
The United boss is leaving three years on from building an entire squad
Kris Voakes
14:45, 13 May 2021

“When I first took the job on it was daunting because you have to build this whole project,” Casey Stoney once told me of the work she had to put in to constructing Manchester United’s first professional women’s team.

“I needed to identify the players, I needed to work out which people I wanted to bring on this journey and I did that. But I’ve got to say those first four weeks were tough, there were a lot of sleepless nights and lots of journeys but we got there and it’s been well worth it.”

That conversation came just after United had won the Women’s Championship at the first time of asking, scoring 98 goals and conceding only seven in their 20 league matches, and the talk quickly turned to the future and the increasingly ambitious targets she was setting for the squad of players she had built in the space of just a few weeks. “I demand very, very high standards and they know that,” Stoney added. “Sometimes it drives them crazy, but I’m preparing them for the next level.”

Two years and two fourth-place finishes in the Women’s Super League on, the former England captain has announced that she will leave Manchester United after Sunday’s FA Cup fifth-round fixture against Leicester City. The hole she will leave is cavernous.

Since first being appointed as United boss, Stoney’s imprint has been stamped right across the women’s section of the club on and off the pitch from start to finish. The progress made by the likes of Ella Toone, Leah Galton and Millie Turner can be traced to the influence of their manager, while Stoney’s insistence on always delivering the best was a prerequisite from the off. In early conversations with her it was clear that she believed in the club’s project following the belated introduction of a women’s team in 2018. 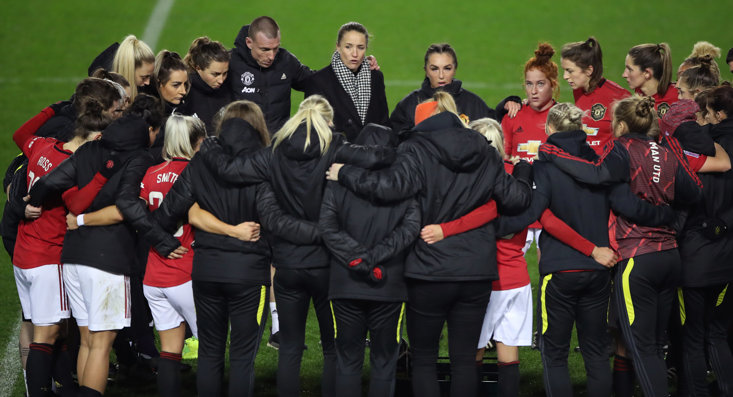 STONEY BUILT THE ENTIRE UNITED SQUAD IN HER VISION

“People have been waiting for it for quite a while and I understand now, having been in the club, why they didn’t do it earlier because they didn’t feel in a position to be able to do it properly,” she told me ahead of the team’s inaugural game.

“This club doesn’t do anything unless it’s done properly, and in five-and-a-half weeks the level of support, the level of care, the level of detail that goes into supporting me and the players is something I’ve never ever experienced being in the women’s game.”

There is now a belief among the footballing fraternity that part of Stoney’s decision to leave came from a drop in that standard of support. The nature of the Covid-19 pandemic meant that mandatory protocols forced United's hand in terms of the previous training setup at Leigh Sports Village and of all the club's teams it is the women who have been most adversely affected out of circumstance. And while the club are said to be working on a package of medium-term investment, that will now come in a post-Stoney era.

Whatever the truth of the matter, United have one hell of a job looking to replace a woman who initially wanted to go down in history as the female Alex Ferguson.

“I’m looking forward to a great career at Manchester United,” she told the Press Association in 2018. “I’d love to be the Sir Alex Ferguson of the women’s game and make sure we build something really special and be there for years and years to come.

“We want to challenge at the top of women’s football and get Manchester United to where it should be.”

It turns out that it was destined to only be a three-year project after all, and the challenge has been left dissatisfyingly incomplete. United are now working on recruiting a new manager as a matter of priority, although they're not expected to rush what will be a vital appointment. Whatever United go on to achieve in the future, Casey Stoney will deserve an incredible amount of credit for having ensured that the club set out on their journey with the professionalism, vision and determination befitting of Manchester United.