If, after the 2019 Betfred Women’s Super League Grand Final, you’d have told Tara Stanley and her Castleford Tigers teammates that they would have to wait a year and a half before they would be able make amends for their second defeat to Leeds Rhinos in a major final that season, of course no-one would have believed you.

Whilst the Castleford fullback may not have felt it in the moments immediately following the full-time whistle, those of us who had enjoyed a watching brief, knew that we’d been a witness to something significant, a major final in front of 3,000 paying fans and the Sky TV cameras, Women’s Rugby League had just announced itself on the sporting landscape in a big way.

The Betfred Women’s Super League never got the chance to build on that momentum in 2020, the pandemic ended the season before it started, but the outlook for 2021 is a whole lot brighter, with the action kicking off this weekend a symbol of the start of what could be a breakout year for the sport, something which Stanley is undoubtedly aware of;

“It’s a massive, massive season, there’s a World Cup at the end it. As much as the momentum has slowed down, people are wanting to watch Rugby League, and on social media people are looking forward to seeing the Women playing. There’s a lot of excitement around that.”

The hype isn’t just confined to social media either, as one of the founding BWSL Clubs, in a real Rugby League hotbed, Castleford Tigers have thrown their weight behind their Women’s programme, something that has lead to Stanley and her teammates seeing their profile increase immeasurably;

“I was in the local chippy, and someone said to me “Tara, are you looking forward to getting back on the field?”, and I’ve never met that person before in my life, even in Aldi, people are tapping me on the shoulder. In Cas, the Women’s game is huge.” 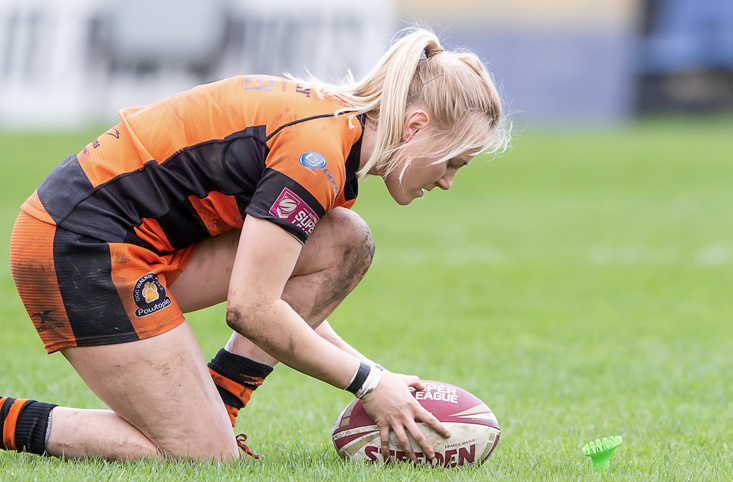 It’s not always been that way however, these supermarket encounters are credit to huge progress made by both the Women’s game and the club in recent years, you don’t have to look too far back to when things were very different, as Stanley recalls;

“I’ve been in it when I’ve pulled on a shirt for the other team because they haven’t had enough players, and now it’s just a completely different game. If I look back on how much I put into my week playing ten years ago compared to now, it’s crazy how different it is.”

That extra time has paid off for Castleford in recent seasons, establishing themselves as one of the leading sides in the country and winning the League Leaders Shield last time out. Despite this success however, Tara and the rest of the squad would be forgiven for thinking about what might have been following those two final defeats to Leeds;

“I’m not going to lie, we had a hangover for some time after those finals, but we’ve bought in a member of staff to work on our mentality, and we believe we had what it takes to win those games, and it was other things, it was what was between our ears really, so we’ve been working a lot on that.”

Coming out on top in the Headingley Grand Final in October is of course the immediate end goal for Stanley and the Tigers, but with the Rugby League World Cup kicking off just a few weeks later, there is no shortage of incentive to play well this season;

“The Women’s World Cup is massive, there’s a lot of work that go’s into playing for the squad, and there’s a lot competitive shirts at the moment, and you really do have to put the work in week by week to put performances in on the field.”

The World Cup Final at Old Trafford will book what is set to be the most important year for Women’s Rugby League in it’s history, and after a rocky 18 months, it really does feel like the sky is the limit; and this weekend is the launch pad. It’s been a long time coming, but the Betfred Women’s Super League is finally back.

The Betfred Women’s Super League kicks off on Sunday with four games, Wigan Warriors vs Warrington Wolves is available to stream via the RFL’s twitch page.