The Tigers beat Warrington Wolves 35-20 on Saturday at Leigh Sports Village with an outstanding all-round display to book a first trip to Wembley since 2014, with Turner scoring three of their six tries in a wonderful bounce-back performance.

The cup final appearance will give Warrington-bound Daryl Powell the chance to leave the Castleford coaching job after more than eight years with the club’s first Challenge Cup win in 35 years.

Cas got off to a strong start and got fair reward for their early efforts when Gareth O’Brien’s show-and-go bought him enough space to burrow his way over the line. The full-back converted and then added a penalty after Jake Mamo’s professional foul had resulted in the Warrington centre being sent to the sin bin.

With the Wire down to 10, Cas made the most of the advantage when Jake Trueman, Niall Evalds and Michael Shenton combined to send Jordan Turner over in the corner for a 14-0 lead.

Turner then grabbed a spectacular second, planting the ball down in the corner despite Blake Austin’s late attempt to push him into touch. Despite O’Brien’s first miss with the boot, Mamo returned to the field after his 10-minute punishment with his Warrington side trailing 18-0. 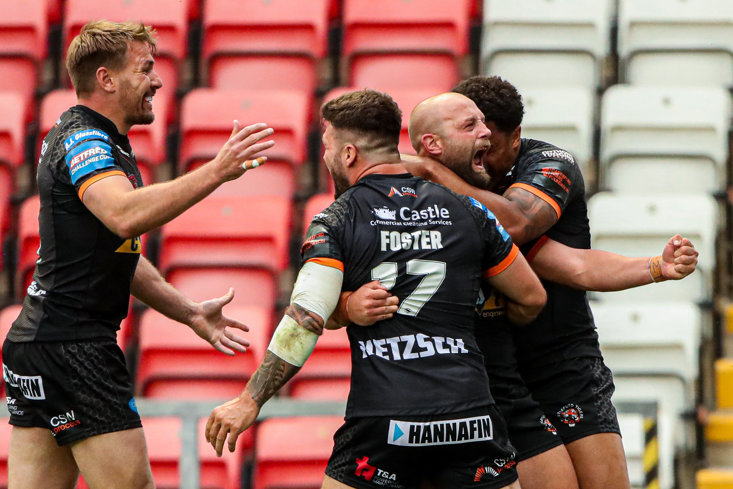 Paul McShane’s drop-goal from distance gave Cas a four-score advantage going into the break, but Ben Currie stretched over early in the second stanza to get the Wolves on the board and Mamo followed up soon after with four points of his own.

But just when the game appeared in the balance once more, Jesse Sene-Lefao finished off a great Castleford set move from left to right to put them 23-8 in front. They were then struck a blow when Jacques O’Neill was sin-binned for a spear tackle and Toby King exploited the space to cross under the posts.

Turner had the major say of a see-saw second half though, holding off two tacklers to ground the ball to complete his hat-trick. McShane added another from close range, and Cas were now coming home with a wet sail at 33-14 with 18 minutes left and O’Neill returning to the fray.

Charnley went over from a set restart but Cas were not to be pegged back, and O’Brien added another penalty late on.

The Tigers will face St Helens in the Wembley final on 17 July, while Warrington are left with only the Super League title to fight for as they look to send departing coach Steve Price out on a high.