Castleford Tigers secured their place in the last four of the Betfred Challenge Cup in the most dramatic of circumstances, as Gareth O’Brien kicked the golden point that knocked out his former side, the Salford Red Devils.

For the second round in a row, Castleford had to go through golden point to get the win against a much improved Salford side.

The Tigers enjoyed the lion's share of possession in the opening exchanges, but were unable to make it count as the Salford defence held firm on their own goal-line, before the game settled into a real set for set arm wrestle. It was the Red Devils who opened the scoring with a quarter of an hour on the clock, when Castleford failed to deal with Kevin Brown’s high kick, allowing Harvey Livett to dive onto the loose ball to score.

The Red Devils visibly grew in confidence following this, and it looked for all the world that Salford had a second when Danny Addy tried his luck from a play the ball, only to be denied by a one-on-one ball steal.

Castleford were back on level terms shortly after, a string of penalties and set-restarts gave them good field position, and Dan Smith was on hand to force his way over from short range.

The Tigers almost had a second with half an hour played when Liam Watts muscled his way over the line, only to put the ball down on Greg Burke’s boot rather than grass before losing control of the ball.

Salford took full advantage of this reprieve with the next possession, a penalty gave them a platform, and Livett hit a beautiful line against the grain to score his second.

The game continued to swing this way and that, and Castleford were soon camped on the Salford line. It looked like the Red Devils would survive until half-time, but Peter Mata'utia crossed with seconds left on the clock to send the teams in locked up at 12-12.

With the game balanced on a knife edge, the second half  was a cagey affair with both team making errors, but unable to capitalise on good field position.

It took 20 minutes for the scoreboard to be moved again, a moment of magic from Man of Steel Paul McShane around the ruck enabling him to draw the fullback and put Michael Shenton over to score. With a quarter of an hour left on the clock, Castleford were down to 12 men, when Gareth O’Brien was sent to the sin-bin for obstructing Chris Atkin’s kick chase just 10 metres out from the Tigers try line. 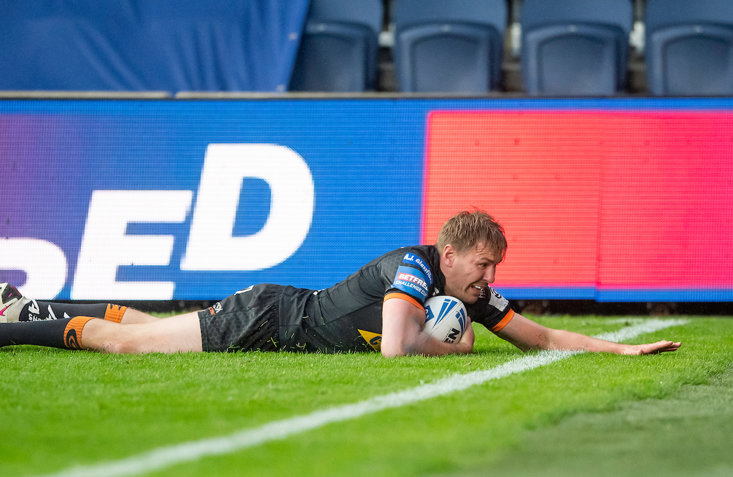 Kevin Brown thought he had scored from the resulting penalty, but Video Referee Liam Moore adjudged that the ball was held up. With seven minutes left on the clock, Cas were temporarily down to 11 men, when Liam Watts was sent to the sin-bin for a late shot.

It looked like Castleford had done enough to hold out for the win, but with 12 seconds left on the clock, Lee Mossop came on to the ball at pace to break the Tigers line and force the game to golden point.

The Red Devils have the first attempt at the drop goal, but Paul McShane’s charge down meant that the Tigers regained the ball in good field position, and it was Gareth O’Brien who was on the spot to knock his former side out of the cup.

In the earlier game, Hull FC got the better of Wigan Warriors after an evenly contested cup-tie on Saturday afternoon.

The two sides were meeting for the second time in 10 days and when Wigan opened the scoring on the ten-minute mark when Jake Bibby scored in the corner to continue his fine start to the season, it looked like the Warriors would earn back-to-back wins. However, It didn’t take long for Hull FC to respond, Chris Satae crashed over from short range, with Marc Sneyd’s conversion edging them in front. We thought it would be close, the opening 15 minutes were toe-to-toe. Sneyd extended the lead with a penalty as both teams continued to size each other up, in what had turned into a physical arm-wrestle between two physical forward packs.

With 10 minutes left in the half, Wigan started to take the upper hand, with Harry Smith’s kicking game earning them multiple repeat sets as they Warriors looked to turn the screw. 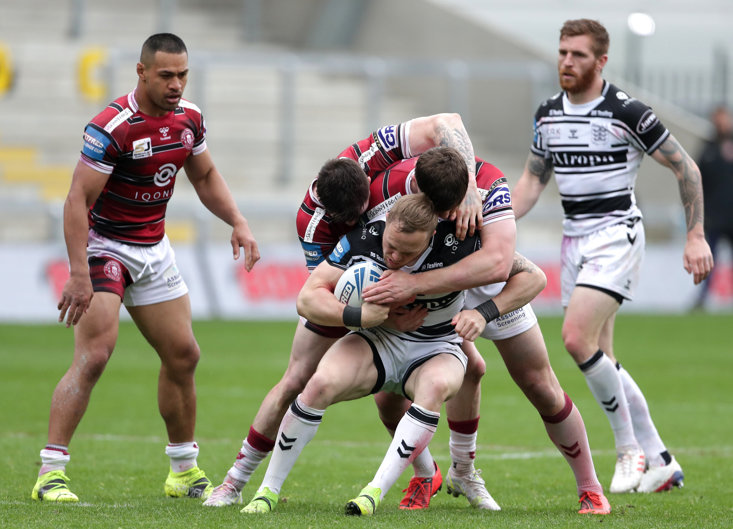 The job got tougher for Hull FC when Jack Brown was sent to the sin-bin for a dangerous tackle, but their defence was superb, and they held fast to hold Wigan out and take an 8-4 lead into the sheds. In a game as close as this, goalkicking was always going to have a big part to play, and Sneyd made up for an uncharacteristic miss just minutes before to stretch the lead again with a penalty with 15 minutes played in the second half.

The defining moment of the game 10 minutes later. Yet again, Sneyd’s boot was at the centre of the action, his low kick forced an error from Bevan French just 5 metres from his own line, and Satae barged his over for his second.

Wigan did give themselves a glimmer of hope with 90 seconds when Dom Manfredi scored on his return from injury, but Hull FC would have the last laugh, when Adam Swift pick the ball off as Wigan desperately tried to keep the game alive, and raced 80 metres to round off a 20-10 win.