The Betfred Super League’s last unbeaten record was obliterated out of sight this weekend as the Catalans Dragons hammered Wigan Warriors, while champions St Helens got back to winning ways and the familiar face of Ryan Hall ran in a hat-trick of tries and his old club Leeds served out a shock thrashing at Castleford.

Steve McNamara’s red-hot Catalans Dragons ended another unbeaten record on Saturday, just seven days on from handing champions St Helens their first defeat. But whereas they had just about held out Saints last weekend, this time around they showed no mercy to Adrian Lam’s Wigan, dealing out a 48-0 thrashing which leaves all three clubs on seven wins after eight matches at the top of Super League.

There were two tries apiece for Josh Drinkwater and Sam Tomkins, playing against the club at which he made his name, as Wigan had simply no response to the dominance of the Dragons’ creative spine of Tomkins, Drinkwater, James Maloney and Michael McIlorum.

Maloney dictated much of the play and kicked eight goals in the rout, with Wigan’s forgettable afternoon capped off by the late sending-off of Zak Hardaker for a head-butt on Sam Tomkins which resulted in a fracas between the pair and Sam’s brother Joel.

SAINTS BACK TO WINNING WAYS

While Catalans leapfrogged Wigan into second place, St Helens went back to the top of the table with a comfortable 34-16 win over Hull FC. Grand Final hero Jack Welsby was the star of the show again, crossing for three tries as Saints got out to a healthy half-time lead they never looked like losing.

Mahe Fonua did grab two tries for the Black and Whites, but scores from Joe Batchelor, Lachlan Coote and Morgan Knowles were added to Welsby’s triple as Saints won with a well sail. 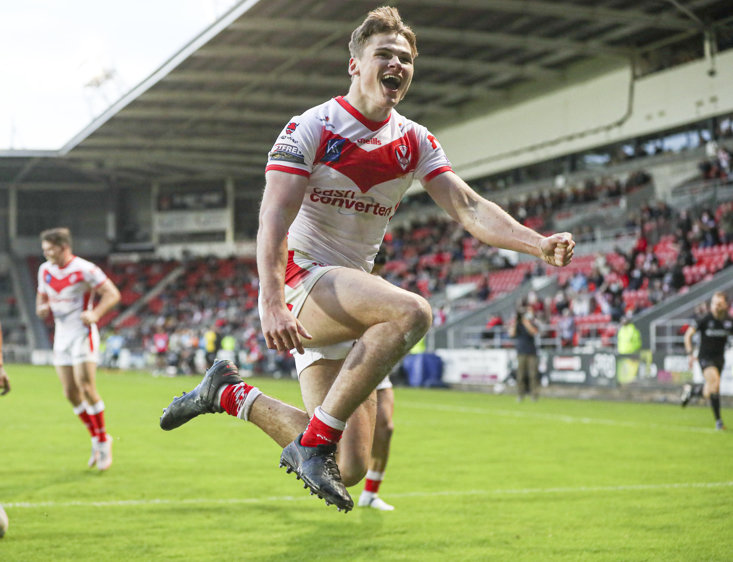 Hull Kingston Rovers are the surprise occupants of sixth spot after the first eight rounds, with their 40-16 win over Leigh Centurions on Sunday taking them past the three-win mark they achieved in the entirety of 2020.

Ryan Hall crossed for a hat-trick and Kane Linnett scored twice for the eight-try Robins, for whom Jordan Abdull was again inspirational. Tony Smith’s side had made hard work of the first half, leading 18-12 at the break, but ran away with the contest after the break against a Leigh outfit still looking for their first win of the campaign.

Leeds Rhinos stunned everyone in attendance at the Mend-A-Hose Jungle as they put 60 points on Castleford Tigers in a performance which immediately had some wondering whether Cas’ coaching change might be best being brought forward.

Daryl Powell is set to take over from Steve Price at Warrington for 2022 with Lee Radford taking up the Tigers’ hot seat, but they will need a huge response to Saturday’s 60-6 shellacking by the Rhinos if they are to fend off questions about a hastier change of coach.

Kruise Leeming and Tom Briscoe scored twice each for the Rhinos in an 11-try display by the visitors, for whom former Cas favourite Luke Gale scored once and dictated much of the play.

In the weekend’s other game, Wakefield Trinity beat in-form Huddersfield Giants 38-12 with Liam Kay crossing twice, while Salford Red Devils will still be licking their wounds after their 62-18 home defeat by Warrington Wolves on Thursday night.