Football
News
Despite all the attacking talent at Spurs, their North London Derby defeat to Arsenal shows Mourinho is still too cautious
Simon Lillicrap
18:52, 14 Mar 2021

It is a pattern we have seen all too often from Jose Mourinho in the past few years. He set his Spurs side up in a defensive manner and as a result of their failure to attack from the first minute, his side fell to a 2-1 defeat to their fiercest rivals Arsenal at the Emirates. Despite starting with Hueng-Min Son, Harry Kane and Gareth Bale, Spurs showed the Gunners far too much respect and sat back even after taking the lead. In truth, they got what they deserved.

“I look up, I don’t look down. If Arsenal was seven points ahead of us I would look to them but because we have seven points more than them, I don’t look down,” said Mourinho before the game, yet his team played as if they were trying to nick a point off The Invincibles. He’s now lost twelve of his last 20 games against the so-called ‘Big Six’.

It was a game which summed up Erik Lamela’s Tottenham career, as he came off the bench in the first half to replace the injured Son and opened the scoring with a ridiculous rabona, before being sent off in the second half. Yet it wasn’t until Mourinho’s side went down to ten men that they showed any consistent attacking threat, as they penned Mikel Arteta’s side in with ten minutes remaining. It is clear that the visitors would’ve been far better off playing to their strengths and attacking opponents from the off, who let’s not forget, are only tenth in the Premier League. 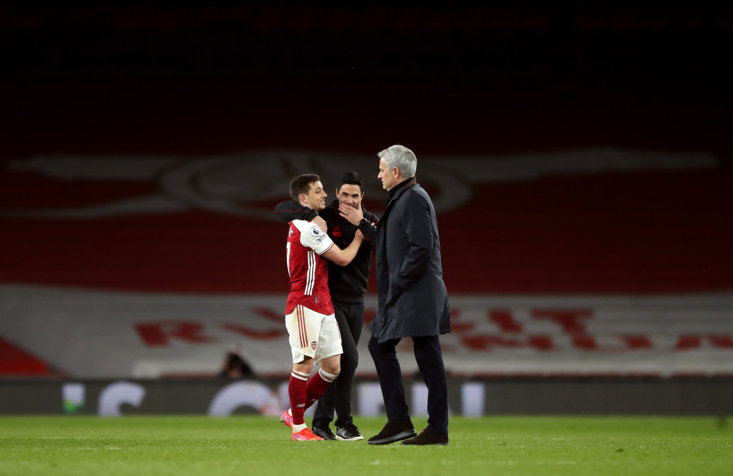 Arsenal do deserve huge credit, especially for coming from behind and taking the initiative in the opening period. Emile Smith Rowe was bright throughout and hit the bar from the edge of the box early on after a strong Arsenal start while the Gunners showed no signs of missing their influential captain Pierre Emerick Aubameyang, who was left on the bench for disciplinary reasons as they probed for the opening goal.

However it was Tottenham who took the lead through Lamela, who scored one of the goals of the season. He's scored a rabona before for Spurs, in the Europa League, but to do it against your fiercest rivals in their own back yard was outrageous. Lucas Moura picked up the ball in the Arsenal box before laying the ball to Lamela, who 'rabonaed' the ball, through the legs of Thomas Partey and into the far corner. It was simply outrageous.

The goal shocked the viewers and also seemed to motivate the hosts, who hit the woodwork again as Cedric hit the post from long range, but they would get the equaliser before halftime. Kieran Tierney made progress down the left hand side before cutting the ball back to Martin Odegaard, who scored his first Premier League goal with the help of a deflection. Spurs rarely threatened in the opening 75 minutes with Harry Kane anonymous in that time frame, and it was Arsenal who continued to have the upper hand in the second half.

They got their just reward from the penalty spot as Alexandre Lacazette converted having won the penalty himself. He mis-hit his shot but Davinson Sanchez caught him on the follow through, to the dismay of Jose Mourinho. 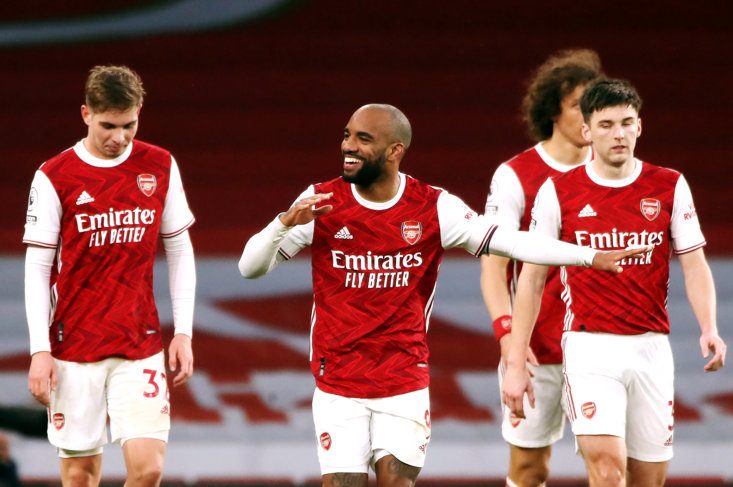 Things went from bad to worse for the visitors as Lamela was sent off for a second yellow card as his flailing arm caught Tierney in the face, to the dismay of both the Spurs coaching staff and his teammates. The Argentine, even when playing his best football in a white shirt, seems to have a tendency to lack consistency and this red card will not help his cause to break into Mourinho’s preferred eleven.

Then, it seemed like a switch flicked. Spurs came on again when they went down to ten, playing their most attacking football of the game as Lucas probed and Kane came into his own. The pair combined from a set piece as Lucas crossed for Kane to head home but he had strayed offside, before the England striker hit the post from a free-kick, coming so close to an equaliser as Spurs finally took the shackles off.

Frustration will be the word of the day from those watching on with a Spurs persuasion. A case once again of what could have been, yet with all this attacking talent, Mourinho is still too cautious. Meanwhile for Arsenal, it is a fully deserved three points as they move just four points behind their north London rivals.

The Sportsman
@TheSportsman
🗣️ "In the first half we were defensively poor"
José Mourinho isn't happy with Spurs' performance but says he is not "pointing the finger" at anyone.
@LastWordOnSpurs | #ARSTOT
0
2
x
Suggested Searches:
Tyson Fury
Manchester United
Marcus Rashford
Lewis Hamilton
F1
Air Jordan
More
football
Man City v Chelsea: ‘Yin And Yang’ Kirby And Kerr Are Taking...
Manchester City host Chelsea on Wednesday night as first take on second in the Women’s Super League, [ ... ]
football
Chelsea 0-0 Brighton Was Tedious But At Least The Premier League...
As Chelsea drew 0-0 at home to Brighton at Stamford Bridge to edge into the top four, it was a game [ ... ]
football
Football Unites To Stop Super League As Ed Woodward Resigns...
The European Super League seems dead in the water. Chelsea are reportedly looking to pull out, as are [ ... ]
football
Ryan Mason And Others Who Became Coaches After Playing Careers...
Ryan Mason will take interim charge of Tottenham when they host Southampton on Wednesday night before [ ... ]
football
Ask The Fans: We Will Never Accept This Chaotic NBA-Style Super...
From fans and pundits to players and managers, it is clear that the vast majority in England are against [ ... ]
football
Premier League Fixtures: Everything You Need To Know Ahead Of...
Three European Super League clubs are in action… sorry, three of the Premier League’s ‘Big [ ... ]
football
European Super League Will Rob Fans But Players Will Pay A Hefty...
‘Football is for the fans’, read the Leeds United t-shirts as they warmed up against Liverpool, [ ... ]
football
Leeds Score Late Leveller To Deny Liverpool Top Four Spot
Leeds will have seemingly had more fans backing them than usual on Monday night when they hosted Liverpool [ ... ]
football
Gary Neville And Jamie Carragher Urge Fans To Come Together...
Jamie Carragher has urged football fans to come together to stop the proposed Super League which has [ ... ]
football
Women's Super League: Title Decider Heads Three Key Games In...
Right, enough of all that other nonsense, here’s a Super League we can all get behind. The WSL [ ... ]
football
Could Man Of The People Jurgen Klopp Leave Liverpool After Super...
Jurgen Klopp has always been a man of the people. Whether you love Liverpool or truly despise them, [ ... ]
football
Jose Mourinho Sacked By Tottenham: Three Key Moments That Led...
Jose Mourinho has been sacked by Tottenham Hotspur less than a week before the League Cup final. He [ ... ]
football
European Super League Explained: Here's Everything We Know So...
Competitive football as we know it is being stolen by the so-called ‘biggest’ clubs in Europe [ ... ]
football
Kelechi Iheanacho Fires Leicester Into FA Cup Final For First...
Kelechi Iheanacho continued his stunning form in front of goal to fire Leicester City into the FA Cup [ ... ]
football
Man United Leave It Late To Beat Burnley As Mason Greenwood...
Manchester United last beat Burnley at Old Trafford back in February 2015 heading into this one. And [ ... ]
football
Fulham Suffer Heartbreaking Blow As Arsenal Score 97th Minute...
Fulham were cruelly denied an historic victory and a massive three points as Arsenal scored an equaliser [ ... ]
football
Leicester FA Cup Triumph Can Offset Top Four Worries And Show...
Leicester are flagging badly but this weekend’s FA Cup semi-final against Southampton could be [ ... ]
football
Chelsea End Man City’s Quad Dreams And Reach Fourth FA Cup Final...
Manchester City’s unprecedented quadruple dream came crashing down on Saturday evening after they [ ... ]
football
Norwich City Seal Fourth Premier League Promotion In A Decade
The Canaries don’t even kick a ball until Saturday evening but thanks to Swansea City and Brentford’s [ ... ]
football
Newcastle United Move Nine Points Clear Of The Drop After Win...
Newcastle United took another step towards securing their safety in the Premier League with a 3-2 win [ ... ]
football
Championship Relegation Battle Analysed: Which Team Has The...
Coventry’s 1-0 at Rotherham on Thursday night felt monumental in the Championship and with Norwich [ ... ]
football
Harry Kane Scores Brace But Spurs Top Four Hopes Are Dented...
Harry Kane continued his glorious scoring form against Everton by netting a brace which put him ahead [ ... ]
football
Everton And Tottenham's Faint Top Four Hopes Dangling On Their...
The games have come thick and fast and now we’re entering the business end of the season where [ ... ]
football
Aidy Boothroyd Sacked: Frank Lampard ''Perfect'' For England...
Aidy Boothroyd has been dismissed as England U21 manager after seven years in the England set-up. After [ ... ]
football
Arsenal Cruise Into Europa League Semis With Commanding Win...
Arsenal cruised into the Europa League semi-finals thanks to a phenomenal first-half performance, beating [ ... ]
football
Manchester City's Quadruple Hopes Enter Decisive Eleven Days...
As Phil Foden rattled in the final goal off the Borussia Dortmund post, it was definitive. Manchester [ ... ]
football
Premier League Fixtures: Everything You Need To Know Ahead Of...
The Premier League is here though we have a fractured programme of fixtures owing to the semi-finals [ ... ]
football
Arsenal's Season Rests On The Europa League And Mikel Arteta...
The most important game of Mikel Arteta’s short managerial career? Quite possibly. The biggest [ ... ]
football
Hillsborough, April 15, 1989: Remembering One Of Football's...
On April 15 1989, a warm, sunny, spring afternoon, Sheffield Wednesday’s Hillsborough stadium [ ... ]
football
Quad Dream Remains Alive As Pep And Man City Advance To Champions...
Pep Guardiola reached his first Champions League semi-final with Manchester City after coming from behind [ ... ]