One of the most popular and beloved boots of the modern era has returned with a radical look ahead of the new season.

The Nike Mercurial has been part of the footballing lexicon since 1998, elevated to prominence by Brazilian superstar Ronaldo who was first to wear this much sought-after silhouette. Twenty one years later and we’re still talking about the Mercurial though its look and composition is strikingly different from that first incarnation.

Through the 1980s, the established heavy-hitters Puma and adidas dominated the boot market despite competition from the likes of New Balance and Patrick.

As Nike became a presence through the 1980s, their boots were highly prized. They signed major endorsement deals with some of the stars of the day such as Liverpool's Ian Rush but it was only in the 1990s when they came up with a trademark boot to rival Adidas’ Copa Mundial or Puma’s King.

Nike’s inspiration for the Mercurial came from athletics rather than football. The boot - called the Tiempo Ultra Light during its testing - was crafted not from kangaroo leather as was the norm at that time but from fabrics traditionally used for running spikes. The reason behind this was to make the boot as light as possible and more resistant to water. The bottom of the boot was much thinner than traditional “plates”.

The first goal scored in a Mercurial boot was on June 16, 1998. Of course, it was Ronaldo who found the net and fittingly the boot was in Brazil’s yellow and blue colours.

Nike tinkered with the design at regular intervals to reflect its status as a leader in the global market, launching its first revision in 2000: The Nike Match Mercurial. It was the lightest boot Nike had ever produced and was again put to good use by a Ronaldo in his prime.

In 2002, Nike introduced the Nike Mercurial Vapor which was again lighter than its predecessor and featured a new aesthetic - lines to replicate the go-faster stripes on sports cars. By this time many of the game's biggest stars were wearing the Mercurial and it was a regular sight at stadiums all over the globe. 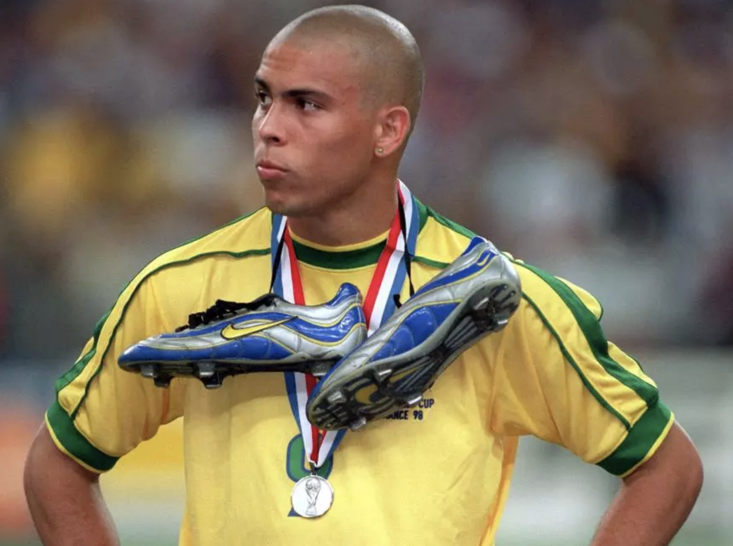 Two years later, the Mercurial Vapor II came along, the biggest change being an enlarged heel tab to improve ankle comfort. This boot was made famous by another Ronaldo - Cristiano - who was carving out a name for himself as one of the brightest stars of the world game.

The Mercurial Vapor III debuted in 2006, making use of the emerging Teijin microfibre which was designed to contour to the foot while the 2008 Mercurial Vapor SL was made entirely from carbon fibre weighing just 185 grammes.

These advances in technology allowed Nike to experiment with colours, seemingly able to call on an endless palette of eye-catching shades which were as far removed from the traditional black boot as could be imagined.

For the 2010 Nike Mercurial Vapor Superfly II, Cristiano Ronaldo was consulted on the design of the boot which now featured studs able to extent and retract to cope with the conditions.

The next biggest change came in 2014 when the trend was to add a ‘sock’ or ‘collar’ to the ankle, giving the boot a bold new look, mirrored by sports footwear across the board. This became the norm for a few years with rivals also incorporating the radical silhouette.

So what’s so special about this latest incarnation which was released this week after debuting at the Women's World Cup? Unusually, it was introduced in the middle of a two-year cycle and makes use of the latest technology to include lettering and logos with the fabric of the boot. It’s also the first time that Flywire and Flyknit have been melded into one. This is to try and stop the boot stretching too much through repeated wear. All Conditions Control (ACC) makes the boot waterproof.

Nike will continue to make changes to one of its most iconic products and this season we are destined to see some eye-catching personalised efforts as the game's great and good look to outdo their rivals.

Nike Football
@nikefootball
Mercurial. Reborn.
Fine-tuned for speed, the all new Mercurial Superfly 360 has been reinvented for the fastest players in the game.
#mercurial #alwaysforward #nikefootball 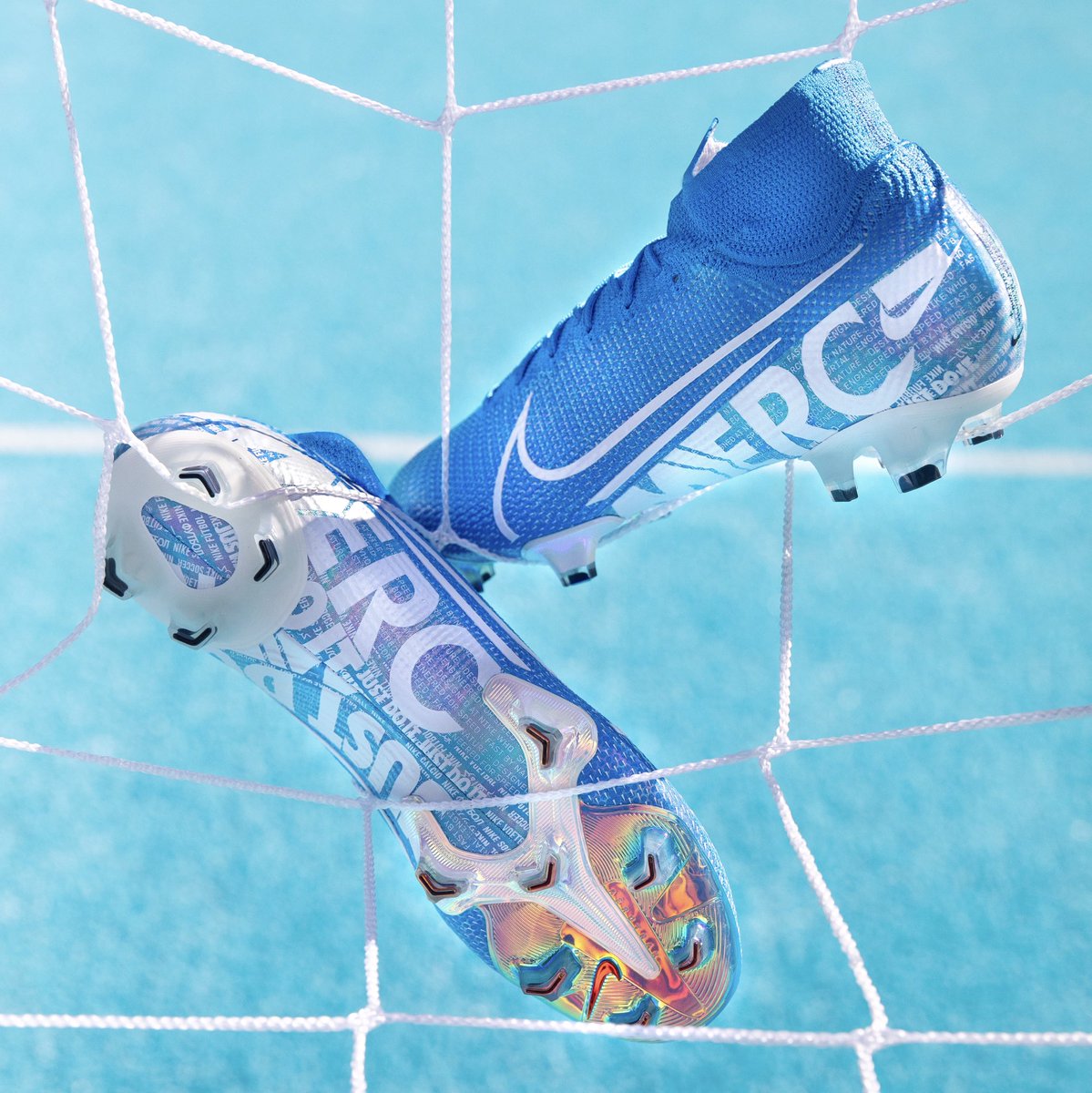 271
1557
More
football
Business As Usual: A Beginners Guide To The Belarus Premier...
If you’re going out of your mind without your football fix, well we’re sorry you just haven’t [ ... ]
football
Why June 30 Could Be D-Day For The Fate Of Premier League Season
England captain Harry Kane has added his voice to the growing calls for the Premier League season to [ ... ]
football
You Heard It Here First - Brescia's Sandro Tonali Is Italy's...
Since winning the World Cup in 2006, it has been turbulent time on the international stage for Italy. [ ... ]
football
A Reunion With Ancelotti Could Resurrect Rodriguez's Stuttering...
No club chews up and spits out world class players quite like Real Madrid. Yet, their sense of entitlement, [ ... ]
football
'Quickly Kevin' Is The 90s Football Nostalgia Podcast To Beat...
While the majority of sports podcasts scramble to fill the minutes within the disruption of the [ ... ]
football
Where Did It All Go Wrong For Phil Neville And The Lionesses?
Winning, Phil Neville recently said at the SheBelieves Cup, is what would bring England’s women [ ... ]
football
''Drop A Few Hand Grenades'' Keegan's Advice To Scholesy The...
A packed out Wembley roared like one of those indomitable Three Lions to greet England’s new messiah. [ ... ]
football
Rise Of The Couch Coach: Coronavirus Causes 119% Surge In Football...
Thousands of us are flocking to virtual reality and gaming to help fill the void of no live football, [ ... ]
football
Review: Diego Maradona - Drop Yourself Into The Great's Chaotic...
When Diego Armando Maradona arrived at Napoli in 1984 for a world-record fee, the entire city ground [ ... ]
football
Arsenal's Tough Choice - Is Donyell Malen The Ying To Aubameyang?
Arsenal’s inability to manage the contractual situations of their biggest stars has plagued them [ ... ]
football
Robbie Fowler Is Making His Mark As A Manager With Brisbane...
The curtains came down on one of the last bastions of football standing in 2020 this week. Before the [ ... ]
football
Long Live The King: Eric Will Always Be Manchester United's...
“If ever there was one player, anywhere in the world, that was made for Manchester United, it [ ... ]
football
I Was There - The Day Football Came Home To Wembley
The closest I ever got to attending the original Wembley Stadium was on its final day in operation in [ ... ]
football
'Sunderland Til I Die' Heads To The Boardroom In Netflix's Second...
The docks have been left deserted. The wealth has dried up. Wearside has become an impoverished place [ ... ]
football
How Chief Creator Silva Became New Face Of Premier League
Football has been cast into uncertainty by the coronavirus pandemic. As it stands, nobody is sure if [ ... ]
football
Lookback:Chelsea 6-0 Arsenal When Arsene's 1000th Game Went...
It was supposed to be an occasion to celebrate for Arsene Wenger, but his 1000th game in charge of Arsenal [ ... ]
football
Ronaldo, Kane, Hazard - The Winners And Losers Of Euro 2020...
So as of this week Euro 2020 became Euro 2021. Another casualty of the global Coronavirus epidemic. [ ... ]
football
Time To Act And Move The Premier League Transfer Window
When my husband had an ear infection, I used my medical knowledge to help him. I said the best thing [ ... ]
football
Southgate Shows Strong Leadership With Rallying Cry To Fans
England head coach Gareth Southgate has sent a rousing message to national team fans as football continues [ ... ]
football
Lookback:Spurs And Chelsea's Eight Goal Thriller
In the three full seasons of Jose Mourinho’s first spell as the club’s manager, Chelsea [ ... ]
football
Take Your Pick - The Premier League Season Ending Scenarios
There are far more pressing concerns than football at the moment, as Jurgen Klopp so eloquently pointed [ ... ]
football
Premier League Clubs Must Be Less Karren And More Klopp Right...
We all know a Karen, don’t we. The proverbial I need to speak to the manager type, and while most [ ... ]
football
PSG Will Never Win Big If They Continue To Be Mentality Midgets
These days, everyone is in need of a laugh, so if you’re not aware of the @NoContextHearn account [ ... ]
football
Blackpool, Video Games And Escapes - How Footballers Have Dealt...
That date of April 3 for the Premier League to resume is looking increasingly optimistic day to day.  [ ... ]
football
Here Are The Meetings That Will Shape A Pivotal Week In The...
Coronavirus has completely destroyed the sporting calendar and led to most events being either completely [ ... ]
football
Elbow Bump! Leyton Orient Are Using FIFA 20 To Bring The Football...
With almost all football suspended for the next few weeks and with boredom already creeping in, one [ ... ]
football
Premier League Hall Of Fame Event Cancelled Due To Covid-19...
The Premier League’s first two inductions into a new Hall of Fame are set to be postponed after [ ... ]
football
Sancho’s Time At Dortmund Made Him A Pioneer - Jude Bellingham...
Results haven’t shown it, and there are fair questions surrounding his tactical approach and leadership, [ ... ]
football
Crystal Palace Left To Rue Alexander Sorloth's Untimely Revival...
Alexander Sorloth looked lost. The strapping Norwegian striker had arrived at Crystal Palace from FC [ ... ]
football
The Man Behind Downton Abbey Turns His Hand To Football And...
“Look around. You’ve given these people something to believe in. The game feeds the soul. [ ... ]
This website uses cookies
Cookies help us and our partners provide statistics. By browsing this website, you consent to the use of cookies in accordance with our Privacy Policy and Cookies Policy.
Accept & Close