European mixed martial arts show Celtic Gladiator return to Manchester on Friday night for the second time of the year, following a successful show in February. The promotion brings an even stronger fight card, with all the action to unfolding live on The Sportsman’s social pages from 6:30PM.

Twenty-one fights in total, ranging from amateurs making their first walk to compete to season professionals on the cusp of a call up to the hallowed UFC octagon. The card features some of the biggest prospects to hail from these shores.

Brendan Loughnane headlines the show, returning after over a year out through injury and training alongside former UFC bantamweight champion Dominick Cruz. The twenty-eight-year-old last was seen winning with a stunning head kick in November 2017 in Stuttgart, Germany and his impressive 10-2 record since his UFC appearance in December 2012 leaves Brendan on the brink of a return.

Amaury Junior will be the man looking to wrestle the interim Celtic Gladiator featherweight crown in Brendan’s backyard. If you witnessed Raymison Bruno’s upset of Pietro Menga earlier this year, you’ll see that everything does not always go to plan in mixed martial arts!

Junior brings an impressive jiu-jitsu pedigree, having won by submission nine times in his twelve victories. Having spent the majority of his career fighting in Brazil, where he has picked up a number of titles, Amaury recently made the switch to Portugal, and chooses to head to British soil for the first time. He even debuted back in 2005 against current UFC flyweight contender Jussier Formiga.

Will Brendan pick up a victory in front of his big Manchester faithful? Or can Brazil reign supreme at the Victoria Warehouse again? 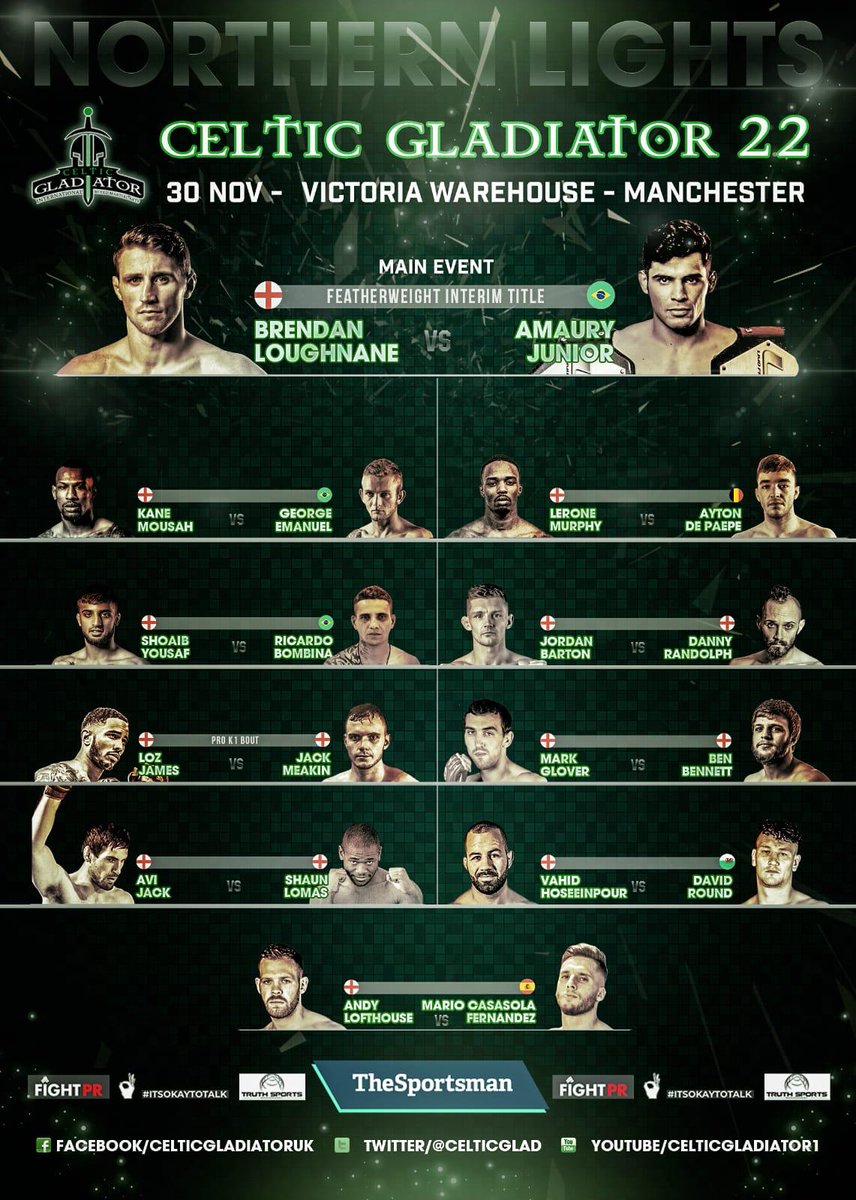 The polarising character of Kane Mousah looks to win on his return to lightweight in the co-main event of the evening, where he faces another Brazilian looking to cause an upset in George Emanuel.

Mousah holds four knockouts on his record and holds a win over former Cage Warriors champion Alex Enlund. The founder of BADR Sport clothing will hope for a successful return to the cage after a defeat at the hands of UFC veteran Robert Whiteford at ACB 87 in May.

George Emanuel steps in on short notice to look to begin the Brazilian upsets on the evening, with the thirty-five-year-old taking the fight on seven days’ notice. Emanuel holds a 4-2 record, with all of his fights not making it past the second round. Fireworks are expected!

Unbeaten prospect Lerone Murphy is considered the one-to-watch on this card. After having a perfect amateur record, racking up four wins with three finishes inside twelve months, the professional ranks have brought similar success. “The Miracle” holds a perfect 6-0 record, with his four knockouts all coming inside the opening round.

Standing in his way is Belgian prospect Ayton De Paepe. The twenty-four-year-old holds an impressive 6-1 record, with that sole loss coming at the hands of rising Welsh prospect Jack Shore. De Paepe has racked up two knockouts in his six victories and will hope for an upset at the Victoria Warehouse!

The ever-popular Shoaib Yousaf makes his return to compete in the UK after his recent victory in Dubai. If you haven’t watched Yousaf fight before, his style is exciting and brings together one of the strongest travelling supports in this country! With a 3-1 record, Yousaf also picked up the 2016 IMMAF World Title before turning professional with an unbeaten amateur pedigree at 10-0. He faces another Brazilian in Ricardo Morais.

The Sportsman
@TheSportsman
📱🥊 Follow us on Instagram to see how we got on at the Celtic Gladiator event in Manchester... 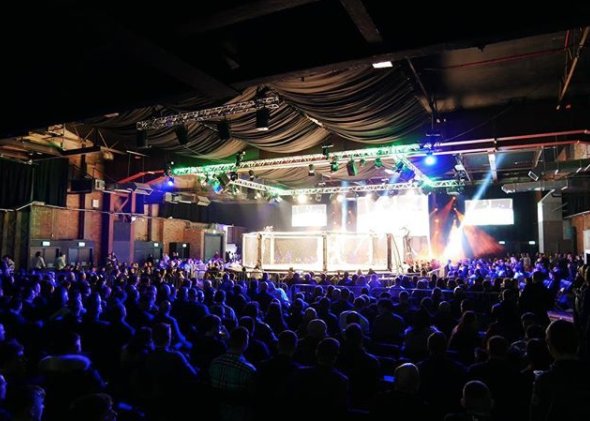 An all-English featherweight battle between unbeaten prospects Jordan Barton and Danny Randolph kicks off the main card, with Barton have won his last night bouts as a professional and as an amateur, with eight knockouts in the process. Randolph holds a perfect 2-0 record as a pro, with two first round finishes. Someone’s 0 has got to go!

The card also features a K1 bout between Manchester’s Loz James who faces Jack Meakin in the closing preliminary bout in front of another strong following. The amateur bantamweight title will also be contested between Pav Sahota and Jamie Kelly, two of the rising 135lbs in the country.

The amateur card and the prelims kick off at 6:30PM, with the main card getting underway at 10:00PM. The entire fight card will be available to watch live and free on The Sportsman’s Facebook, YouTube and Twitter!

x
Suggested Searches:
Tyson Fury
Manchester United
Marcus Rashford
Lewis Hamilton
F1
Air Jordan
More
mma
Gilbert Burns Is Back And Looking To End Kamaru Usman's Unbeaten...
The UFC’s efforts to ensure events remain watchable throughout the Covid-19 pandemic are set to [ ... ]
mma
The Diet Plan McGregor Is Using To Ensure He’s Fighting Fit...
Conor McGregor returns to the Octagon this weekend when he takes on Dustin Poirier for the second time [ ... ]
mma
At £330,000, Ronda Rousey Is The Highest Earning MMA Fighter...
It’s been a long time coming and the only person more prepared than the fans is the man himself [ ... ]
mma
Talented, Tough And Charitable, Who Is Conor’s UFC 257 Opponent...
All eyes will be on Conor McGregor this weekend as he makes his return to the Octagon after another [ ... ]
mma
Michael Bisping’s Believe You Me Is The Perfect Pod To Satisfy...
With nearly 300 episodes to currently demolish, this is the podcast to satisfy your MMA munchies.  [ ... ]
mma
The UFC Needs Paige VanZant's Instagram Followers More Than...
It was over almost before it began. Eighteen months of waiting culminated in a dominant Amanda Ribas [ ... ]
mma
Sanitised Violence: When Cage Warriors Went Behind Closed Doors
Just before UK lockdown began, top European MMA promotion Cage Warriors took place in a hauntingly deserted [ ... ]
mma
''Best Shape I've Ever Seen Him'' - Conor McGregor Bringing...
The wait is almost over as Conor McGregor makes the final preparations for his return to the Octagon [ ... ]
mma
From The Greatest To The Fiercest, UFC 245 Promises A Night...
Let’s take stock for a second. 2019 has delivered some blistering moments. Who can forget Jorge [ ... ]
mma
Hungry And Focused, It's The New Improved Conor McGregor
Conor McGregor’s striking coach, Owen Roddy, insists his fighter “has that hunger again” [ ... ]
mma
''Focused'' Conor McGregor Announces His Octagon Return In 2020
Conor McGregor has come out of MMA retirement and announced his return to UFC at the start of next year. [ ... ]
mma
From Flanker To Fighter: James Haskell Talks To TheSportsman...
Former England rugby star James Haskell announced last week that he'll be swapping his scrum cap [ ... ]
mma
His Three Most Notorious Moments Inside The Octagon As Conor...
The former UFC featherweight and lightweight champion Conor McGregor has announced his retirement [ ... ]
mma
Tenshin Nasukawa Unleashes Amazing Capoeira Kick To Bounce Back...
The defeat to Floyd Mayweather in a farcical exhibition big-money boxing match on the last New [ ... ]
mma
#Bellator216: Michael Page Outpoints Paul Daley In Disappointing...
Michael ‘Venom’ Page outpointed long standing rival Paul Daley at the Mohegan Sun Arena [ ... ]
mma
#Bellator216: MVP And Daley Set For All-British Brawl In Connecticut
The biggest domestic UK MMA fight of all time goes down this Saturday evening… in Connecticut, [ ... ]
mma
Aaron Chalmers Suffers Shock Defeat In Hometown Bellator Newcastle
Bellator kicked off their European Series in Newcastle with a bang, with an incredible twelve finishes [ ... ]
mma
Aaron Chalmers Aims To Please As Bellator Heads To Newcastle
Aaron Chalmers bids to move to a perfect 5-0 record as a mixed martial artist in his hometown, as he [ ... ]
mma
Conor McGregor 'Clone' - German MMA Fighter Emulates His Hero...
If you are going to model yourself on UFC Legend Conor McGregor then you better be able to deliver the [ ... ]
mma
Conor Mcgregor And Khabib Nurmagomedov Slapped With Hefty Bans...
Conor Mcgregor And Khabib Nurmagomedov have both been banned for their parts in the mass brawl that [ ... ]
mma
Tenshin Nasukawa Responds To Conor McGregor Calling Him Out
The Japanese martial artist Tenshin Nasukawa has seemingly not allowed his confidence to be knocked [ ... ]
mma
Horrendous Scenes As MMA Fighter Dislocates His Knee Whilst...
Not what you want to see on a Sunday morning but here we go anyway. As we know, MMA is probably the [ ... ]
mma
Yair Rodriguez Stuns Chan Sung Jung With Last Second Knockout...
Yair Rodriguez produced a sickening elbow to the face of Chan Sung Jung in the last second of their [ ... ]
mma
Conor McGregor Inspires Dallas Cowboys To Victory And Claims...
Conor McGregor bounced back from his defeat to Khabib Nurmagomedov by watching the Dallas Cowboys beat [ ... ]
mma
Conor McGregor's Top 5 Knockouts
The return of Conor McGregor to the octagon after an extended… sabbatical will redraw the collective [ ... ]
mma
Korean Taekwondo Team Dazzle Audience With Action Packed Display
It’s over ladies and gentleman. If you’re thinking about taking up Taekwondo, or looking [ ... ]
mma
Ultimate Fighter 27 Finale Is Perfect Prelude To UFC 226!
The Ultimate Fighter Season 27 draws to a close as the perfect warm-up act for the hotly anticipated [ ... ]
mma
Aaron Chalmers' First Bellator Bout Sees The Ex-Geordie Shore...
On Friday night, MMA fighter Aaron Chalmers sensationally won his bout with Ash Griffiths by technical [ ... ]
mma
UFC Atlantic City: Kevin Lee Misses Weight, Main Event Still...
The octagon returns to Atlantic City, New Jersey for the first time in nearly four years with the promotion [ ... ]
mma
Jacare Meets Brunson In Main Event At UFC Charlotte
The octagon returns to Charlotte, North Carolina after almost an eight-year hiatus with a twelve-bout [ ... ]