Caught your breath back from that exhilarating last round? The Champions League returns with just four teams left standing in the battle for the most illustrious trophy in European club football.

Tottenham Hotspur saw off Premier League rivals Manchester City to compound Pep Guardiola’s misery in the competition in his post-Lionel Messi years. This is the first time they’ve reached the semi-final of the European competition in over half a century.

Ajax gained a host of new fans after upsetting Massimiliano Allegri’s Juventus, Barcelona humiliated Manchester United, and Liverpool have started to make good on their promise to follow up last year’s final, with victory over Porto.

But how does each club’s success in the tournament this year fit in within the overall context of their respective seasons? The Sportsman takes a look at each candidate still vying to lift the European Champion Clubs' Cup on June 1 at the Wanda Metropolitano in Madrid.

Sheer joy was etched on the face of every single face that had travelled from London to Manchester to witness Tottenham Hotspur overcoming a favoured City outfit in the second-leg of their Champions League Quarter-Final.

A top-four spot for next season is all but confirmed though the Lilywhites haven’t helped themselves at all in 2019. Spurs - once entrenched in the title race - could eventually finish more than 20 points behind the winners. They also finished second from bottom in the ‘Big Six’ mini-league, collecting just two wins towards a tally of seven points from playing Manchesters City and United, Arsenal, Chelsea, and Liverpool this season.

Domestic cup competitions haven’t gone well for Spurs by any stretch, crashing out of the FA Cup to London rivals Crystal Palace in the fourth round and having a firstleg semi-final in the League Cup overturned by Chelsea - both results in the space of three days at the end of January.

It’s everything or nothing for Erik ten Hag’s revered young Ajax side. Their two-leg Champions League semi-final against Tottenham Hotspur is sandwiched by the KNVB Cup final against Willem II at De Kuip.

Ajax hold the record for the most number of titles, five ahead of Feyenoord on 18, though a loss this time will mean that it will have been at least a decade since they last won the trophy, and the third successive loss having got to a final.

They’re being pressed hard in the Eredivisie by last year’s champions PSV Eindhoven. Both stand on 80 points with just two games remaining, Ajax holding the advantage with a superior goal advantage. It’s had to go on the backburner this week however, with the KNVB moving the entire round of gameweek fixtures to accommodate Ajax’s Champions League bid, with the full round being moved to May 15.

The Blaugrana are the only club from Europe’s major leagues to have won the continental treble on more than one occasion. Following Pep Guardiola and Luis Enrique’s successes in 2009 and 2015 respectively, current manager Ernesto Valverde is looking to make it a third in the past decade. They’ve already wrapped up their fourth La Liga title in five years, with three games left to go, and have reached the final of the Copa del Rey - which this year will be played against Valencia at the Estadio Benito Villamarín in Seville at the end of May - for the sixth straight season.

In their five previous semi-finals defeats in the Champions League, their victors have ultimately gone on to pick up the trophy. Last four opponents Liverpool could well be buoyed knowing that Barca have only progressed from one of their four semi-finals in the premier European competition against English opposition.

There could well be a double on the cards this season for Jürgen Klopp’s side. The Reds’ 91-point in the Premier League tally after 36-games is already a better haul than any of Manchester United’s full seasons under Sir Alex Ferguson but Liverpool can still leave the season empty-handed having been consistently challenged by an unrelenting Manchester City side who currently sit above them by one in the table.

Liverpool reached the final of the Champions League last season where they were defeated by Real Madrid. They’re looking to go one better this year.

The first leg of Tottenham Hotspur versus Ajax takes place at 20:00 (GMT) on Tuesday 30th April.

The first leg of Barcelona versus Liverpool takes place at 20:00 (GMT) on Wednesday 1st May.

Football on BT Sport
@btsportfootball
We asked, you answered 👊
De Ligt - 87%
Alderweireld - 88%
De Jong - 83%
A combined Spurs and Ajax semi-final XI as voted for by you! 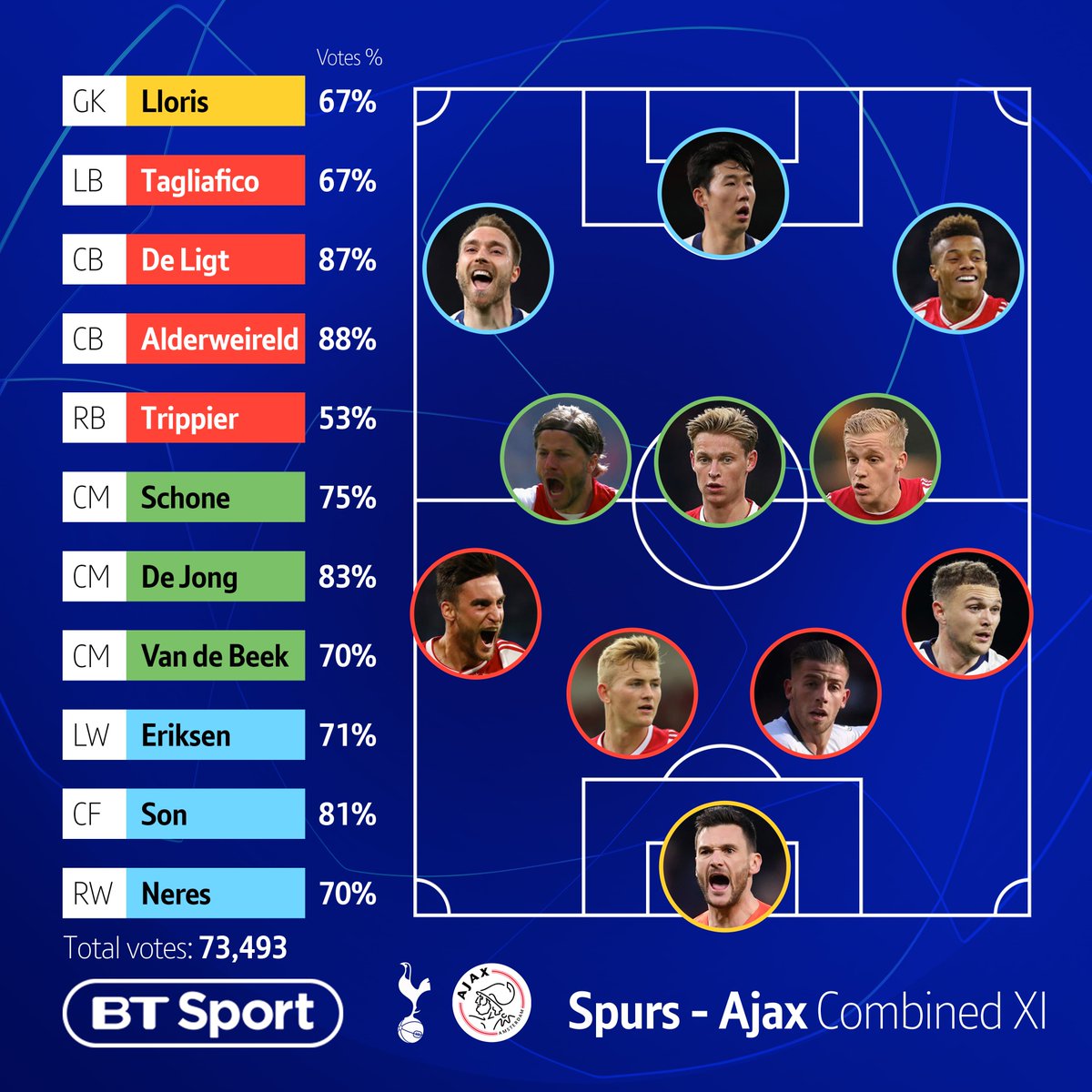